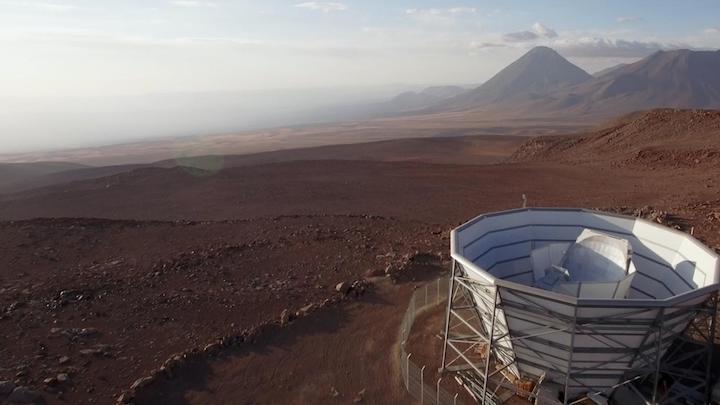 The Atacama Cosmology Telescope measures the oldest light in the universe, known as the cosmic microwave background. Using those measurements, scientists can calculate the universe’s age.

From a mountain high in Chile’s Atacama Desert, astronomers with the National Science Foundation’s Atacama Cosmology Telescope have taken a fresh look at the oldest light in the universe. Their new observations, plus a bit of cosmic geometry, suggest that the universe is 13.77 billion years old, give or take 40 million years.

The new estimate matches the one provided by the standard model of the universe and measurements of the same light made by the Planck satellite, a space-based observatory that ran from 2009-2013.

This adds a fresh twist to an ongoing debate in the astrophysics community, said Simone Aiola, first author of one of two new papers on the findings posted July 15 to arXiv.org. The trouble is that research teams measuring the movements of galaxies have calculated that the universe is hundreds of millions of years younger than the Planck team predicted. That discrepancy suggested that a new model for the universe might be needed, and sparked concerns that one of the sets of measurements might be incorrect.

“Now we’ve come up with an answer where Planck and the Atacama Cosmology Telescope agree,” said Aiola, a researcher at the Flatiron Institute’s Center for Computational Astrophysics in New York City. “It speaks to the fact that these difficult measurements are reliable.” 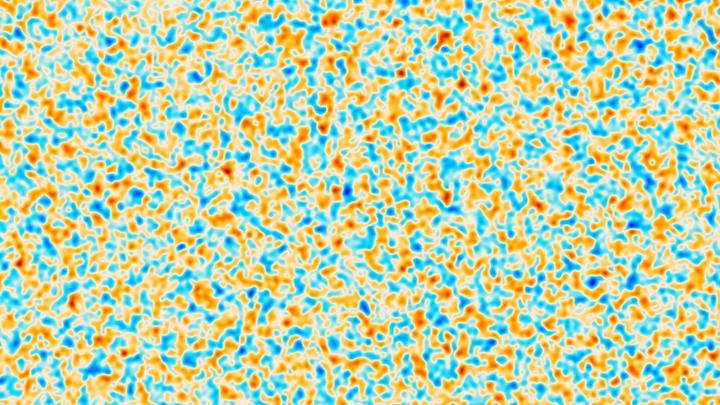 A portion of a new picture of the oldest light in the universe taken by the Atacama Cosmology Telescope. This part covers a section of the sky 50 times the moon’s width, representing a region of space 20 billion light-years across. The light, emitted just 380,000 years after the Big Bang, varies in polarization (represented here by redder or bluer colors). Astrophysicists used the spacing between these variations to calculate a new estimate for the universe’s age.
Image courtesy of ACT Collaboration

The age of the universe also reveals how fast the cosmos is expanding, a number called the Hubble constant. The Atacama measurements suggest a Hubble constant of 67.6 kilometers per second per megaparsec. This result agrees almost exactly with the previous estimate of 67.4 by the Planck satellite team, but it’s slower than the 74 inferred from the measurements of galaxies.

“Making this independent measurement is really exciting because there’s a mystery in the field, and this helps us sharpen our understanding of that mystery,” said Jeff McMahon, an associate professor of astronomy and astrophysics at the University of Chicago who led the design of the detectors and other new technologies used to make this measurement. “This confirms the ongoing discrepancy. And we still have much more data to analyze, so this is just the beginning.”

The close agreement between the Atacama Cosmology Telescope and Planck results and the standard cosmological model is bittersweet, Aiola said: “It’s good to know that our model right now is robust, but it would have been nice to see a hint of something new.” Still, the disagreement with the 2019 study of the motions of galaxies maintains the possibility that unknown physics may be at play, he said.

Like the Planck satellite and its earthbound cousin the South Pole Telescope, the Atacama Telescope peers at the afterglow of the Big Bang. This light, known as the cosmic microwave background, or CMB, marks a time 380,000 years after the universe’s birth, when protons and electrons joined to form the first atoms. Before that time, the cosmos was opaque to light.

If scientists can estimate how far light from the CMB traveled to reach Earth, they can calculate the universe’s age. That’s easier said than done, though. Judging cosmic distances from Earth is hard. So instead, scientists measure the angle in the sky between two distant objects, with Earth and the two objects forming a cosmic triangle. If scientists also know the physical separation between those objects, they can use high school geometry to estimate the distance of the objects from Earth.

Subtle variations in the CMB’s glow offer anchor points to form the other two vertices of the triangle. Those variations in temperature and polarization resulted from quantum fluctuations in the early universe that got amplified by the expanding universe into regions of varying density. (The denser patches would go on to form galaxy clusters.) Scientists have a strong enough understanding of the universe’s early years to know that these variations in the CMB should typically be spaced out every billion light-years for temperature and half that for polarization. (For scale, our Milky Way galaxy is about 200,000 light-years in diameter.)

The Atacama Cosmology Telescope measured the CMB fluctuations with unprecedented resolution and sky coverage, taking a closer look at the polarization of the light. “The Planck satellite measured the same light, but by measuring its polarization in higher fidelity, the new picture from Atacama reveals more of the oldest patterns we’ve ever seen,” said Suzanne Staggs, the telescope’s principal investigator and the Henry deWolf Smyth Professor of Physics at Princeton University.

This measurement was possible thanks to new technology designed and built by McMahon’s team. “Basically, we figured out how to make the detectors measure two colors and to pack as many into each camera as possible,” McMahon said. “Then we developed new lenses out of metamaterials.” (Metamaterials are a type of material that’s engineered to produce properties that don’t exist naturally.)

From conception to deployment at the telescope to analysis, the process has spanned nearly 10 years, McMahon said. “Working with this amazing team to develop this project all the way from concept sketches to producing results at the forefront of cosmology, has been absolutely fantastic.” 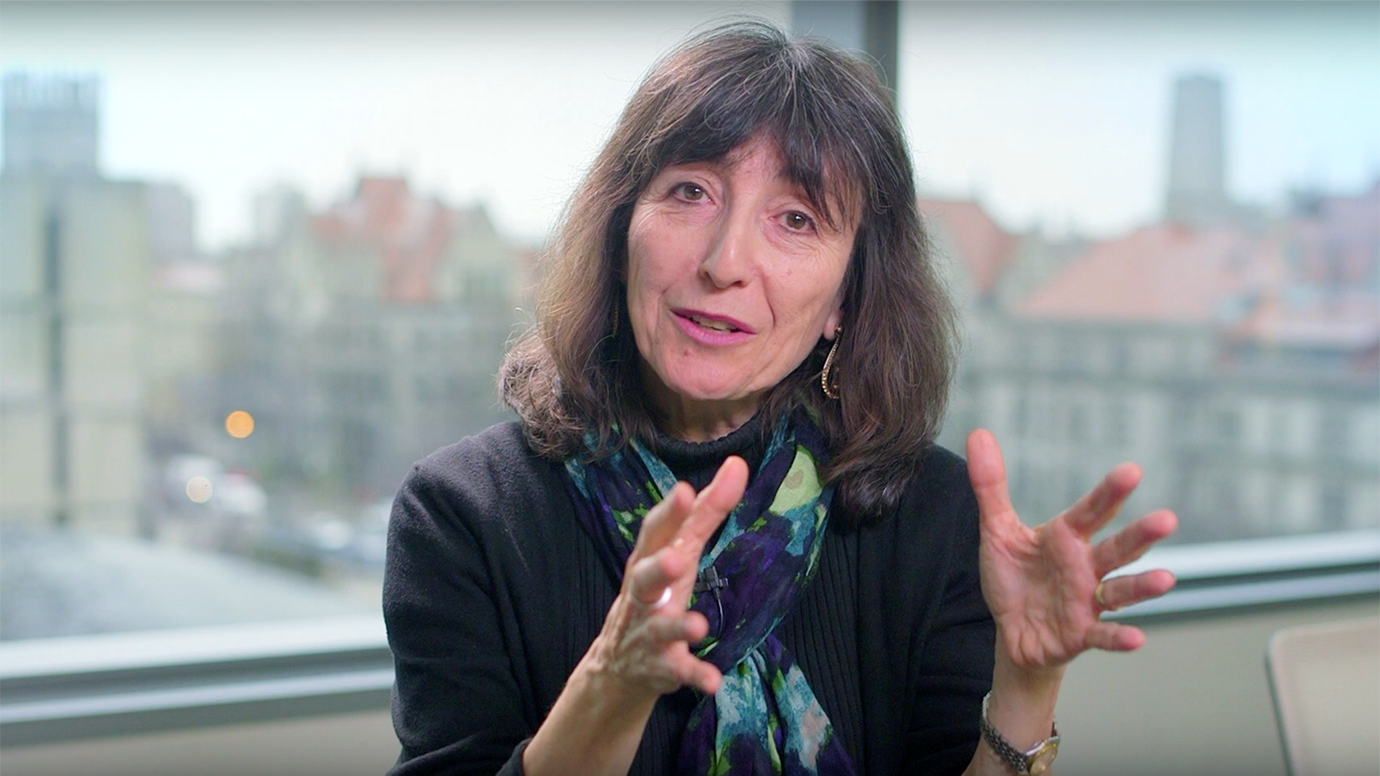 2:11
Prof. Wendy Freedman explains a new method for measuring the expansion of the universe.
Video by UChicago Creative

As the Atacama Cosmology Telescope continues making observations, astronomers will have an even clearer picture of the CMB and a more exact idea of how long ago the cosmos began. The team will also scour those observations for signs of physics that doesn’t fit the standard cosmological model. Such strange physics could resolve the disagreement between the predictions of the age and expansion rate of the universe arising from the measurements of the CMB and the motions of galaxies.

“We’re continuing to observe half the sky from Chile with our telescope,” said Mark Devlin, the telescope’s deputy director and the Reese W. Flower Professor of Astronomy and Astrophysics at the University of Pennsylvania. “As the precision of both techniques increases, the pressure to resolve the conflict will only grow.”

“I didn’t have a particular preference for any specific value — it was going to be interesting one way or another,” said Cornell University’s Steve Choi, first author of the other paper posted to arXiv.org. “We find an expansion rate that is right on the estimate by the Planck satellite team. This gives us more confidence in measurements of the universe’s oldest light.”

The ACT team is an international collaboration, with scientists from 41 institutions in seven countries. The telescope is supported by the National Science Foundation and contributions from member institutions.