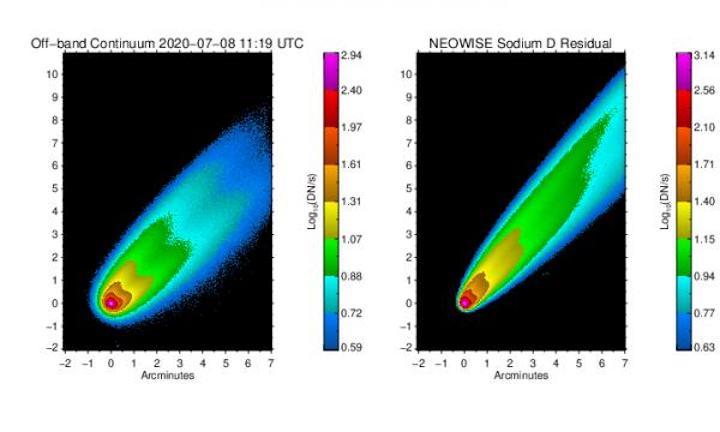 Comets are "icy dirtballs" and their tails are made of dust, gas and plasma (ionized gas). As comets approach the Sun on their highly elliptical orbits, heat from sunlight causes the ice to turn into gas (sublime) which drags material (generically called "dust") from the surfaces of the comet as it escapes. As sunlight reflects off of tiny particles of dust, they get a kick of momentum and drift away from the Sun. Heavier bits of dust are harder to push and drift more slowly. These forces affect the shape of the dust tail, very similar to the appearance of the comet to the naked eye, shown on the left.

"Atomic sodium responds to sunlight in a similar way to cometary dust, but its momentum kick comes from a very particular wavelength of yellow light – the same color seen in sodium vapor street lamps," Morgenthaler said.

This light is then re-emitted in a random direction, which allows us to see it here on Earth. “Thanks to acceleration by intense sunlight, the sodium tail takes on a different shape than the tail seen in off-band filtered images, which are dominated by reflected light from dust. In comparison, the sodium tail is narrower, longer and points directly away from the Sun,” Schmidt said.

Since the push on sodium atoms is stronger than on the dust and other gas that comes off of comets, it provides a different perspective on conditions close to the comet's surface. “Sodium tails have only been observed in very bright comets, such as Hale-Bopp and the sungrazer ISON," Morgenthaler said. While the element has been found in spectra of comets near the Sun, images of the emission are relatively rare, since the glare of the Sun makes this a challenging observation.

In early July, Comet NEOWISE approached the Sun for the first time in nearly 4,500 years. For observers in the northern hemisphere it is now faintly visible just before dawn. By next week it will be visible at dusk as well. Although it is growing fainter, when viewed through binoculars its showy tail should continue to dazzle through at least July 22, when it passes a mere 100 million kilometers from Earth. Morgenthaler and Schmidt plan to monitor the comet’s evolution as it races away from the Sun. The team are now using Monte-Carlo computer models to simulate the comet’s sodium tail in order to understand the outgassing rates and speeds.

IoIO was built with the support of an NSF grant to PSI to study the effect of Io's volcanic material on Jupiter's magnetosphere (http://www.psi.edu/news/iosodium). The observatory has also observed Mercury's sodium tail (https://www.psi.edu/news/cover-pages/2018/mercurys-sodium-tail).