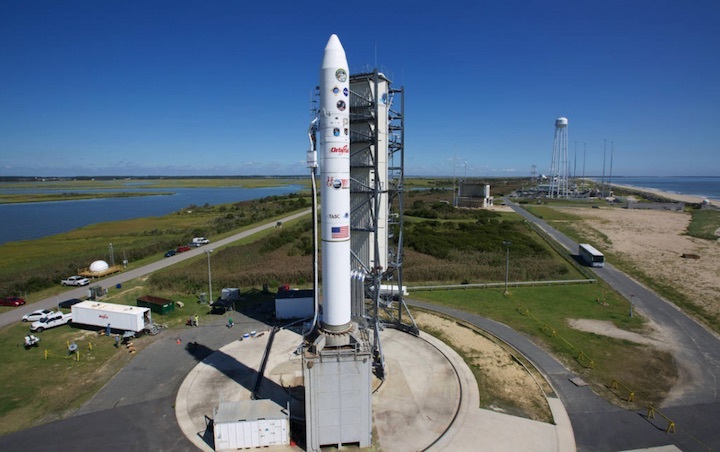 For the first time in its 10-year flight history, the Minotaur IV rocket is preparing to make its inaugural launch from the Mid-Atlantic Regional Spaceport, MARS, on Wallops Island, Virginia.

The classified mission from the National Reconnaissance Office, known as NROL-129, will launch sometime within a launch window that opens at 09:00 EDT (13:00 UTC) on Wednesday, 15 July 2020.

Overall, the Minotaur IV has a 10-year launch history spanning six missions to date, with next week’s being the seventh.  All missions have been successful, giving the rocket a coveted and undisputed 100% success rating.

At present, it has launch locations at Vandenberg Air Force Base, California, Kodiak Island, Alaska, Cape Canaveral Air Force Station, Florida, and the Mid-Atlantic Regional Spaceport, Virginia — making it one of the most versatile rockets in terms of launch locations in the U.S. fleet.

The rocket itself is an expendable, all solid propellant vehicle derived from the LGM-118 Peacekeeper intercontinental ballistic missile (ICBM).  It is overall part of a Minotaur family of launch vehicles and is the variant from which the Minotaur V is derived.

Preparation for Minotaur IV’s first launch from MARS began in earnest in June with delivery of the propellant segments that will make up the vehicle.

In a one-on-one interview with NASASpaceflight, Kurt Eberly, Program Director Small and Medium Space Launch, stated “The motors were delivered in June, same with the Orion 38.  They were transported from Vandenberg out to Wallops, and then we stacked on 10 June.  Stage one went first, and then stages two and three [went independently on the same day].”

The three motors that will be used in next week’s orbital launch were cast between 1988 and 1990 as part of the Peacekeeper ICBM program.  They have undergone numerous acceptance checkouts and non-destructive evaluations by the Air Forcethrough the Aging Surveillance Program to ensure they meet all safety guidelines for use, noted Mr. Eberly.

“There is an Aging Surveillance Program that the Air Force does with these motors, so they have all sorts of things to inspect them.  And then we fire them pretty regularly on Minotaur.  And so they collect a bunch of information … based on the data we telemeter down during the flights.

“And then the Air Force and their contractors analyze all that data, and they’re able to update their models of how the propellant ages and any concerns they have via non destructive inspection techniques.”

After casting, the motors were stored in humidity and temperature controlled buildings at Hill Air Force Base, Utah, before being transported to Vandenberg Air Force Base where integration and test personnel prepared them for flight.

“We actually have the Air Force deliver them out to Vandenberg where all the logistics are in place because they’ve done all the test shots of these things from Vandenberg,” said Mr. Eberly.

After those checkouts are done, Northrop Grumman takes over, routing cables, performing tests of their own, adding ordinance, and doing checkouts on the Thrust Vector Control system before the motors are shipped to their launch location.

The classified payload itself was encapsulated in late-June and transported to the launch site on 2 July, where it was hoisted atop the vehicle to complete overall integration.

The payload was processed at the new Payload Processing Facility located on Wallops Island, and was a collaboration between Virginia Space and the NRO.

“It is a world-class, nice, payload processing facility on Wallops Island,” said Mr. Eberly.  “It was a really smooth operation to have the customer come in and integrate their spacecraft and do a little check out, and then we encapsulated them inside the fairing.”

Where are launch preps now?

With integration complete, the teams have already completed the Range Interface Test, which saw the rotating service structure pulled back from the rocket to expose all the communication antennas and verify good connectivity with the Range at Wallops.

This test also involved flowing telemetry and practicing data flow path routing as well as conducting a communication test with NASA’s Tracking and Data Relay Satellite (TDRS) system in orbit — which will be vital for downrange communications.

Minotaur IV’s overall mission duration is quite long for this flight, and by the time the fourth stage ignites, the rocket will already be out of range of the tracking sites at Coquina, North Carolina, and on the island of Bermuda.

Yesterday, the teams performed the “green card rehearsal”, which is where communications for off-nominal conditions and decision-making are practiced.

The final major outstanding pre-launch milestone will come tomorrow, Friday 10 July, when the entire launch team with Northrop Grumman and the NRO will gather on console and perform a full mission dress rehearsal.

The team times this practice to coincide with the actual launch timeline, coming on console Friday morning at 04:00 EDT (08:00 UTC) and heading for a targeted, simulated T0 and liftoff at the opening of the window at 09:00 EDT (13:00 UTC).

For the launch of NROL-129, Northrop Grumman will be using the Mission Operations Control Center, or MOCC, at Wallops.  The facility made its debut for launch operations last year, and has already been used for previous Antares launches, including this year’s NG-13 Antares/Cygnus launch.

Due to the COVID-19 pandemic, Northrop Grumman is socially distancing their launch operations by using more than one control room. “Typically, we use only one on the MOCC grounds and then the range and management would be in the RCC [Range Control Center].  This time we’re going to occupy three control rooms, two in MOCC and then the RCC,” said Mr. Eberly.

In addition, an engineering backroom at Northrop Grumman’s facility in Chandler, Arizona, will allow engineers to monitor graphical telemetry and the communication net.

“It’s the same paradigm we use on Pegasus and Antares launches to have that remote telemetry distribution and the remote comms connections… that’s helped us quite a bit actually to reduce the density and not have people sitting elbow-to-elbow like you typically would see in a control room,” added Mr Eberly.

But the launch team itself isn’t the only element altered due to COVID-19.

According to Mr Eberly, Northrop Grumman has “developed a process where we tell folks, ‘You need to be six feet away from each other to do everything, but tell us if you need to be closer and we’ll go take a look at it.'”

All personnel involved in processing operations wear a mask and either goggles or a face shield.  Gloves are also used both due to COVID-19 and to prevent Foreign Object Debris (FOD).

However, tasks that include hazardous operations — like ordinance — still require two people at a minimum.

“So our whole approach is … we can’t succeed unless we keep our workforce healthy and safe,” said Mr Eberly.

“And so where we need people to be close together, such as a crane operation where people need to be guiding something down and they need to be in the same area, then we will go through a review board where we [look at] those operations with our senior personnel.

“[And we’ll] make suggestions saying ‘Hey, if you took 15 more minutes, could you do things linearly instead of in parallel to space out more?’ And then if we determine we actually do need to be closer than six feet to do an operation, then we decide what kind of personal protective equipment we need to mandate to keep our workers safe as well as time limits for how close they can be in proximity to each other.”

Because MARS is on the NASA-owned Wallops Range, Northrop Grumman’s procedures for close-quarters work in the COVID-19 era must match or be approved by NASA.

“All of our procedures are reviewed by Range Safety as usual.  And we haven’t seen any difference between our planning and our operations versus what NASA’s requirements are for working on their base,” added Mr. Eberly.  “So that’s been good overall because we’re all thinking the same thing and operating under the same guidance.” 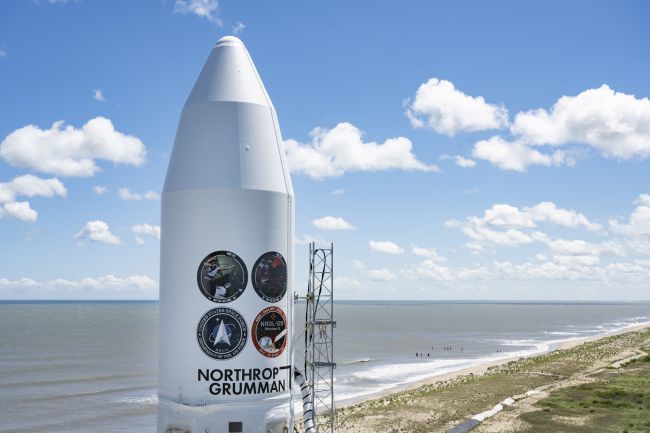 The U.S. Space Force will launch four top secret reconnaissance satellites into orbit from Virginia's Eastern Shore Thursday (July 15) and you can watch it live online.

A Northrop Grumman Minotaur IV rocket is expected to launch the mission, called NROL-129, for the U.S. National Reconnaissance Office from NASA's Wallops Flight Facility on Wallops Island, Virginia at 9 a.m. EDT (1300 GMT). It is the first Space Force launch from Wallops, one of the oldest launch sites in the U.S., since the military branch formed in December.

You can watch the NROL-129 launch here, courtesy of NASA, beginning at 8:30 a.m. EDT (1230 GMT). You can also watch the launch directly from NASA on the Wallops Flight Facility's YouTube page here. The NROL-129 satellites will launch from Pad-0B at the Mid-Atlantic Regional Spaceport at the Wallops facility.

"This will be our first U.S. Space Force mission and the first dedicated NRO mission from Wallops," said the Space Force's Lt. Col. Ryan Rose, chief of Launch Small Launch and Targets Division at the Space and Missile Systems Center, in an Air Force statement. "We look forward to continuing to launch national priority satellites for our NRO partner."

As this is a classified mission, the exact launch time has not been officially released, but it is targeted in a window that opens at 9 a.m. EDT (1300 GMT) and closes at 1:45 p.m. EDT (1745 GMT), according to a Notice to Airman advisory from the Federal Aviation Administration. There is a 90% chance of good weather for the launch,

The launch may even be visible to some spectators along the Mid-Atlantic East Coast with clear, cloud-less skies and an unobstructed view. It will follow a southeastern trajectory away from Virginia as it heads to orbit, according to NASA.

This is the first launch of a Minotaur IV rocket from NASA's Wallops Flight Facility in seven years. The four-stage, 78-feet-tall (24 meters) last flew from Wallops in 2013 to launch NASA's LADEE mission to the moon to study lunar dust.

Minotaur IV rockets are solid-fueled boosters made up of former intercontinental ballistic missile parts. Its first three stages are solid-fuel motors from decommissioned Peacekeeper missiles, with a commercial solid rocket motor serving as the upper stage to deliver payloads into orbit.

The U.S. Air Force awarded the NROL-129 launch contract, valued at $38 million, to Northrop Grumman in early 2019, according to Spaceflight Now.  The mission is managed by the Space and Missile Center's Rocket Systems Launch Program and was awarded under the center's Orbital/Suborbital Program 3 Lane 1 project. 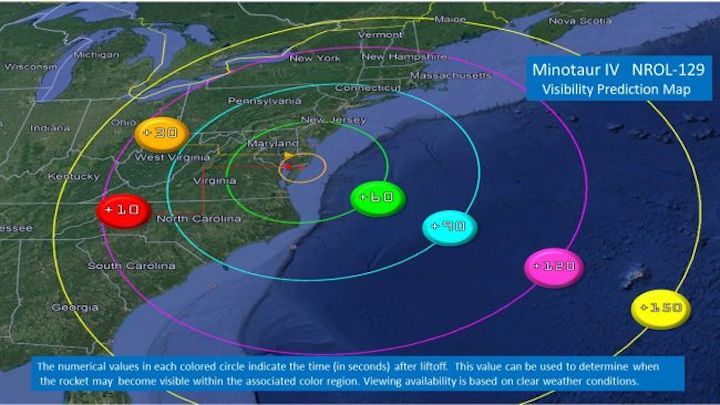 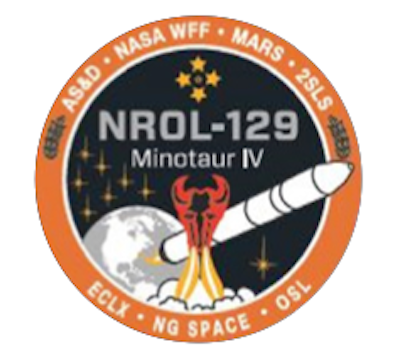 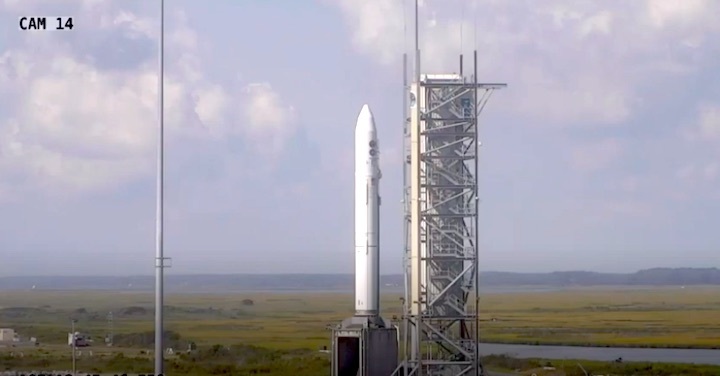 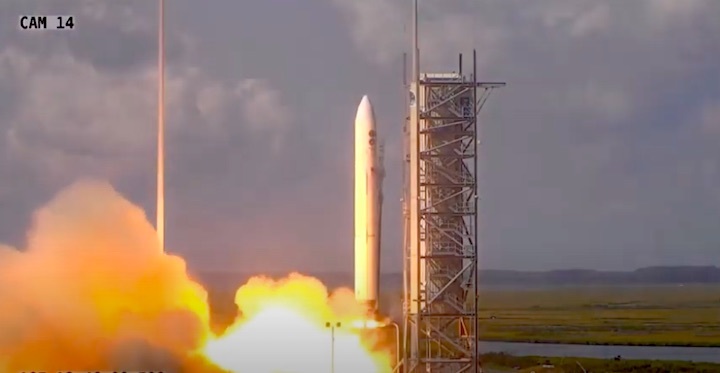 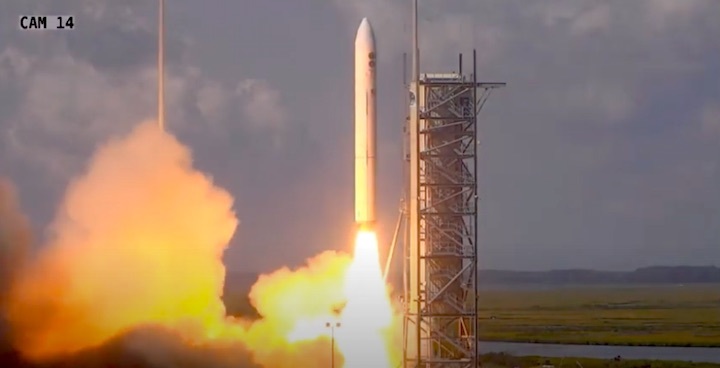 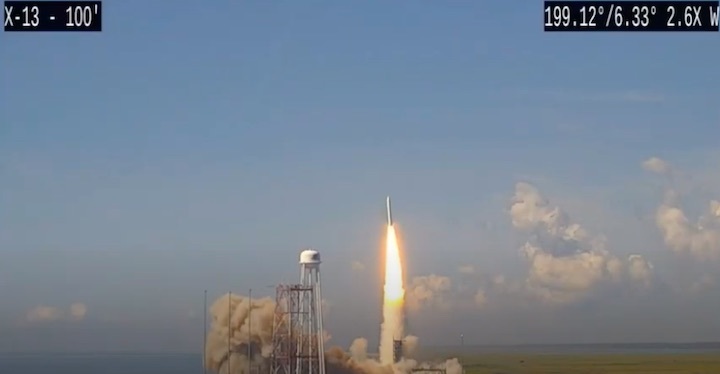 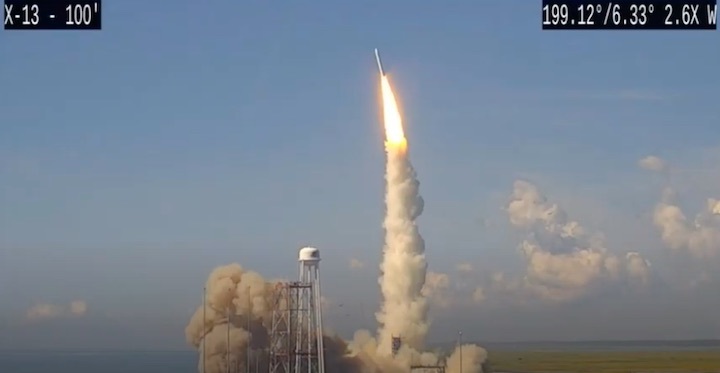 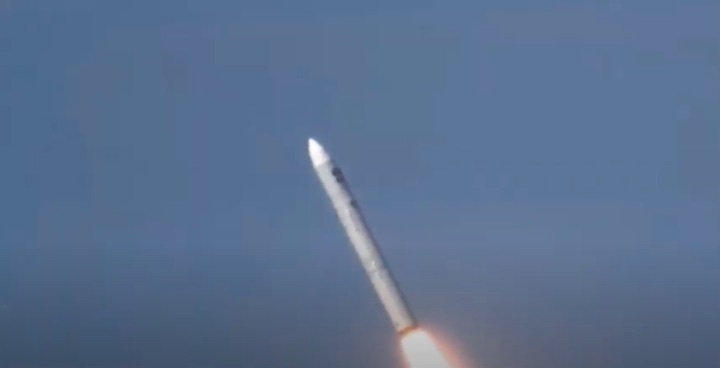 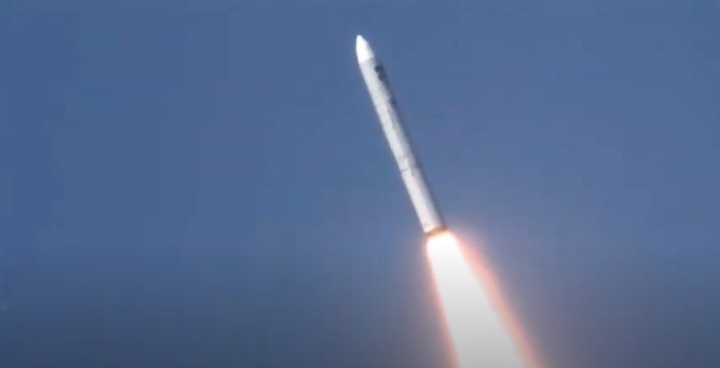 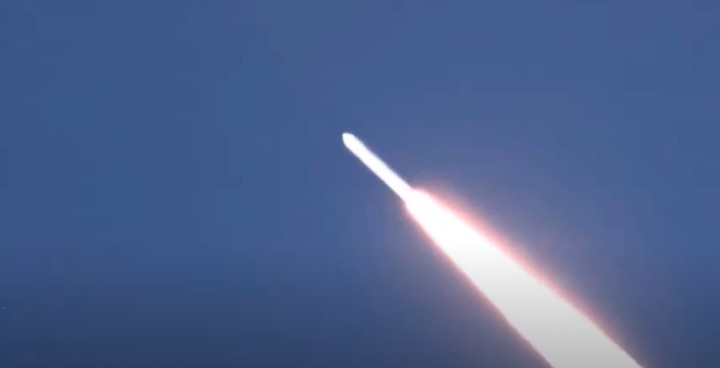 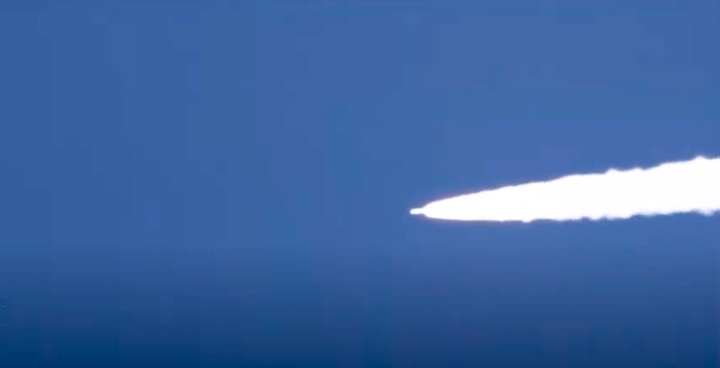 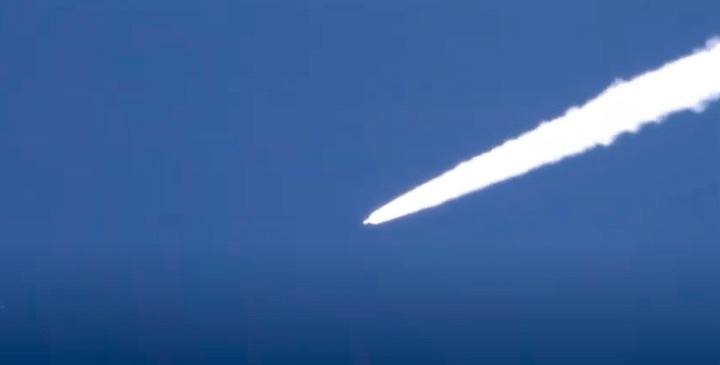 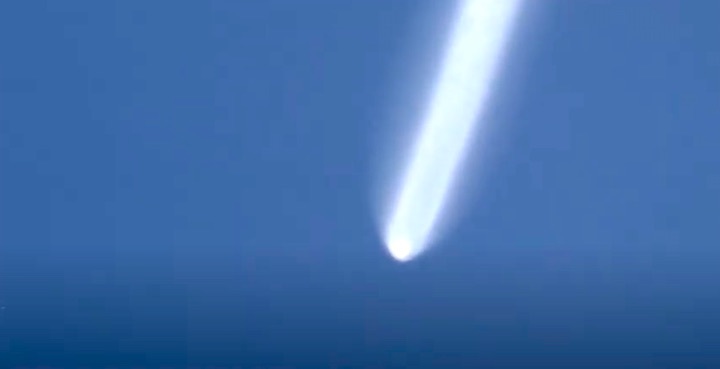 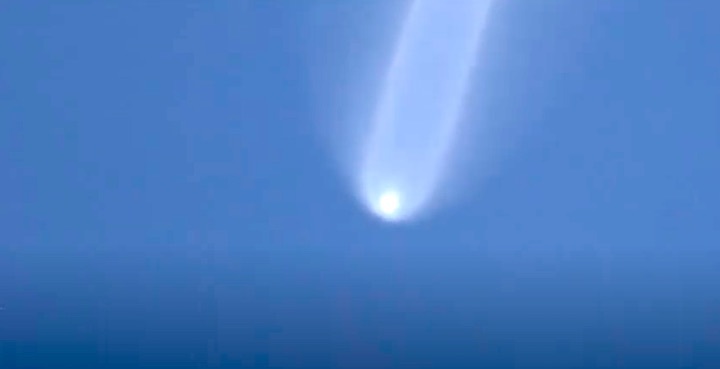 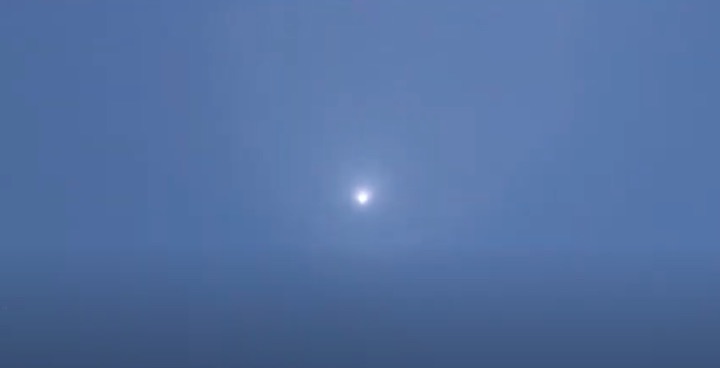 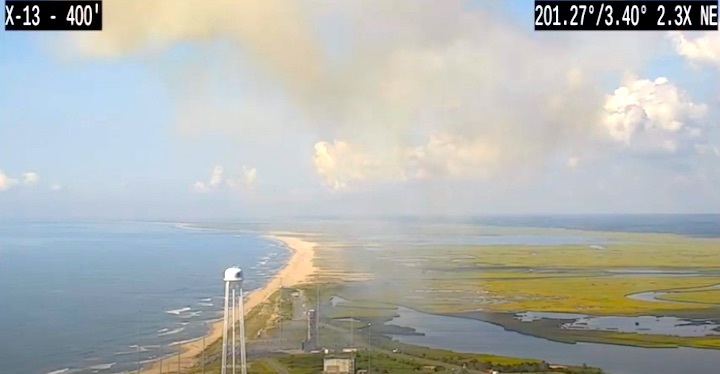