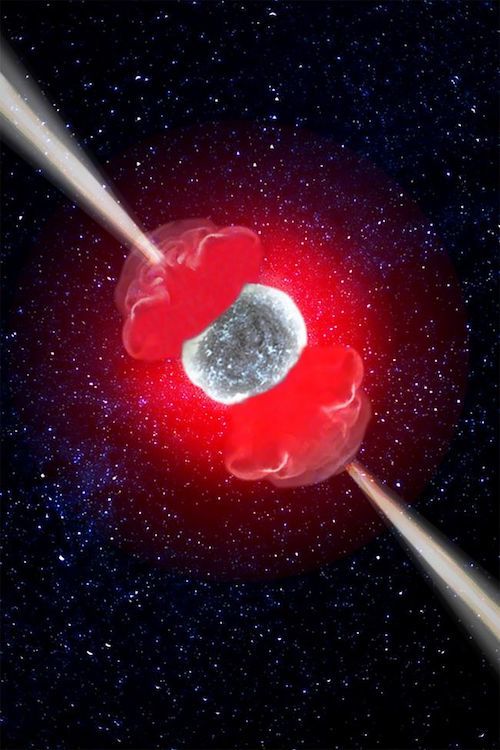 How would you make a hypernova?

But while hypernovae are undoubtedly ferocious, they are also incredibly rare and we’ve only seen a few dozen examples in surveys of the cosmos completed over the past few decades. There are so few known that astronomers even have a tough time even classifying them, sometimes calling them hypernovae, sometimes superluminous supernovae and sometimes referring to them as various subclassifications of regular supernova. With so little information, scientists even struggle to understand how they form and what makes them so powerful.

Here are a few ways that scientists think these brilliant, ferocious explosions can form:

When massive stars die, they go out with a serious bang. In the last few minutes of their lives, they form a core of dense iron and nickel. Unlike lighter elements, the fusion of iron saps energy, rather than releasing it. With no energy to support against the crushing weight of the star’s own atmosphere, catastrophic collapse sets in.

But in the star's last moments, its squashed up core converts itself into a ball of almost pure neutrons, which briefly halt its downfall, triggering a big bounce followed by a spectacular explosion — a supernova.

Sometimes that remnant core survives, transitioning to a quiet eons-long retirement as a neutron star. But sometimes, when the star is 40 times the mass of the sun or more, that dense ball of neutrons is helpless against the overwhelming crush of gravity, and it doesn’t even get the chance. Other times, for smaller stars, when the conditions are just right, there is enough material and it collapses back onto the newborn neutron star after the initial explosion.

In either case, the neutron star folds in on itself, with nothing able to stop gravity from doing what it does best: make things smaller. And in this case, the ultimate source of unstoppable gravity sets in: a black hole is born.

If that star was rapidly spinning, tons upon uncountable tons of material swirling and flowing into the emergent black hole would whip up forces of electricity and magnetism into a frenzy, creating the right conditions to launch jets of material, blasting away from the black hole at a nearly the speed of light. Those jets would then slam into any dithering ejecta from the initial explosion, reigniting it in a fiery burst and perhaps forming some of the hypernovae that we see in our skies.

Pulling the rug out

While the “collapsar” model is able to explain some hypernova behavior, it can’t explain it all. Another potential source of these tremendous explosions may come from the hearts of the stars themselves.

Inside the cores of giant stars, elements fuse to release energy in the form of radiation. This radiation pushes on the surrounding gas, propping it up from gravitational collapse. This is all well and dandy and can keep the star going for millions or even billions of years.

But you know how you can combine an electron with its anti-particle, called a positron, and release a bunch of pure energy? That energy comes in the form of a gamma ray, a bit of high-energy radiation.

Well, that process can actually happen just as easily in reverse: if you have a high-energy gamma ray, it can one day decide to spontaneously turn into a pair of particles, an electron and a positron.

So, in the raging inferno at the center of a star, this “pair production” happens all the time. And the electrons and positrons quickly find each other, becoming radiation again, and allowing the star to support itself. But if the cycle gets out of balance by even a tiny bit, too many pairs of particles can form. If that happens, in the ultra-brief window before the particles become gamma rays again, the star can lose its support.

In less than a heartbeat, the rug gets pulled out from underneath the star, and the whole shebang (a star tens of times more massive than the sun) collapses in on itself in a sped-up trainwreck of a supernova explosion, releasing far more energy than it normally would, thus resulting in a hypernova.

Sometimes one star in a pair explodes and leaves behind a neutron star. Then its stellar sibling will also kick the bucket, detonating in its own blaze of glory.

If conditions are just right, the exploding star can dump enough material onto its neutron star neighbor to trigger a runaway nuclear reaction. This is the same process that ignites Type 1a supernovae, just scaled up.

In other words, a hypernova.

Astronomers aren’t sure which mechanism is the most common, but however nature makes these monsters, she means business.

Astronomie - How to make a hypernova
224 Views
Created with page4