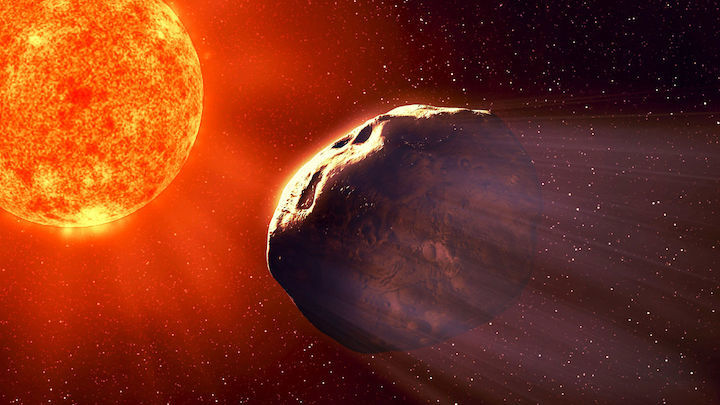 Earlier this year, astronomers discovered an oddball asteroid inside the orbit of Venus—the first member of a predicted flock near the Sun. No bigger than a small mountain, the asteroid has now gained another distinction: It appears to be rich in the mineral olivine, which makes up much of Earth’s deep rock. Some astronomers think that is a clue to a larger set of asteroids, never properly accounted for, that was forged early in the formation of the Solar System.

“It’s improbable that we look at this new population and an olivine-dominated object is the first type we see,” says Francesca DeMeo, an asteroid hunter at the Massachusetts Institute of Technology who was not part of the discovery team. “That’s what makes this a cool result.”

Most of the nearly 1 million known asteroids lie in a belt beyond Mars, shepherded by Jupiter’s gravity. Just 23,000 Atira asteroids—named after a Native American goddess—have been found within Earth’s orbit, because interactions with the inner planets upset their orbits and eventually send them crashing into a planet or the Sun. But astronomers have long suspected the existence of an even smaller population of short-lived objects within the orbit of Venus, informally called Vatiras.

They’re hard to spot. Like Venus, these objects would appear low on the horizon at dawn and dusk, barely visible against the glare of the Sun. Yet on 4 January, astronomers using a small survey telescope at the Palomar Observatory in California found one: 2020 AV2, a 1.5-kilometer-wide asteroid in a 151-day orbit around the Sun.

To find out what 2020 AV2 is made of, Marcel Popescu, a researcher at the Astronomical Institute of the Romanian Academy, and his colleagues used telescopes on the Canary Islands to prise apart the asteroid’s reflected light, revealing absorption lines that are clues to chemical composition. They identified the fingerprint of olivine, a major mineral in the mantle of Earth and other planets, Popescu and his colleagues reported on 18 June in the Monthly Notices of the Royal Astronomical Society. “We’re not able to say definitely that it is an olivine-dominated asteroid, but olivine is abundant at its surface,” Popescu says.

Separate studies of the object’s trajectory by Carlos and Raul de la Fuente Marcos, brothers who are researchers at the City University of Madrid and were also co-authors on the discovery paper, revealed that 2020 AV2 likely originated in the main asteroid belt. Gravitational interactions with Jupiter would have flung it, and potentially some neighbors, toward Earth. There, a gravitational dance with the terrestrial planets probably nudged its orbit inside Venus over millions of years. That path, along with its small size, suggests to Popescu a way to solve a decades-old “missing mantle” puzzle for asteroids.

The same separation into core, mantle, and crust that took place in rocky planets soon after they formed is also thought to have occurred in small planetary embryos 4.56 billion years ago. Heat from the decay of short-lived radioactive aluminum-26 caused iron and nickel-rich rocks in these embryos to sink into their cores while olivine-rich rocks rose into a mantle and the lightest minerals formed a thin crust. Subsequent collisions shattered these embryos into asteroids.

Yet although plenty of metal-rich asteroids have been identified, the olivine-rich mantle asteroids are few and far between. “When you fragment differentiated bodies, you should get a lot of mantle out,” says Marco Delbo, of the Côte d’Azur Observatory in Nice, France. “But we don’t see many of these asteroids in the main belt.” In 2019, DeMeo reported finding 21 new olivine-rich asteroids in the main belt, bringing the total to 36. But that’s still not enough to account for all the missing mantle material.

One idea is that astronomers just can’t see small enough. The olivine-rich asteroids are more easily pulverized than their harder iron cousins, suggesting most of the missing mantle sits in small pieces—a “battered-to-bits” model first proposed in the 1990s. 2020 AV2 could be a far-flung representative of a hidden population of even smaller, olivine-rich objects in the main belt that are hard to see because they’re farther from Earth, Popescu says. “As soon as we are able to observe smaller objects, it is expected that we will find these objects,” he says.

Other researchers are skeptical. In her 2019 study, DeMeo searched for olivine-rich objects nearly as small as 2020 AV2 and found only a handful—not enough to hint at a hidden smaller population. Moreover, she says, the Vatiras are likely to hail from the inner part of the asteroid belt, where olivine-rich bodies are slightly more common. That makes 2020 AV2’s composition a little less surprising, she says. The discovery “definitely adds to our body of knowledge,” she says. “I just don’t think it clinches any final conclusions.”

Meanwhile, Popescu wants to observe the asteroid again and look for signs of another mineral, pyroxine, which would firm up its identity as a “mantle” asteroid. And he hopes ongoing surveys will spot more close-in asteroids. “It’s a very interesting object, a peculiar one—the first of its kind,” Popescu says. “I want to see if there will be others.”