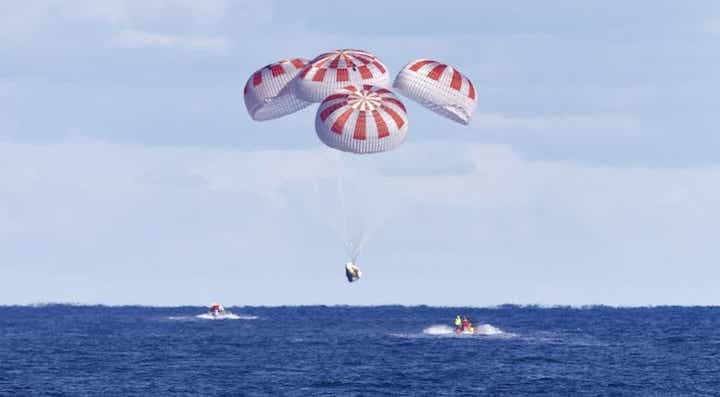 A SpaceX Crew Dragon spacecraft descends under its parachutes at the end of the Demo-1 test flight in March 2018.
NASA / Cory Huston

Astronauts Bob Behnken and Doug Hurley have been busy putting the SpaceX Crew Dragon capsule through its paces since their historic flight to the International Space Station in May as the first NASA astronauts aboard a commercial rocket and capsule.

Now NASA says they may be returning to Earth as early as August 2. NASA and SpaceX have identified three potential landing zones in the Atlantic Ocean near Jacksonville and Cape Canaveral and one in the Gulf of Mexico off the coast of Pensacola.

Weather and other factors will determine which site is chosen for the historic splash landing in the ocean which hasn't been done with astronauts aboard since the Apollo era.

NASA astronauts Bob Behnken and Doug Hurley perform a rehearsal on Saturday, May 23, 2020, for the launch of SpaceX's Demo-2 mission, its first launch of astronauts to the International Space Station.
NASA

But before the Dragon capsule splashes down there is still some work to do in space.

Then around the July 4 holiday the crew will test the Dragon capsule’s ability to support four crew members – a critical step for the success of the upcoming Crew-1 mission later this year.

“We’ll bring the crew over and look at how we might sleep in Dragon and how we might use the other systems with four crew so that’s an important demonstration for us,” Commercial Crew Program Manager Steve Stich said during a press conference Wednesday.

If Behnken and Hurley return in early August, Stich says the next launch of astronauts on the SpaceX Crew-1 mission could happen in September.  NASA has determined they need at least 6 weeks between the landing of the Demo-2 Dragon capsule and the launch of the Crew-1 Dragon spacecraft which will take NASA astronauts Victor Glover, Mike Hopkins, Shannon Walker and Japanese astronaut Soichi Noguchi to the space station.

The Dragon Crew1 vehicle is at the SpaceX Hawthorne facility in California now undergoing checkouts of the propulsion system and it will ship to Kennedy Space Center by the end of July.