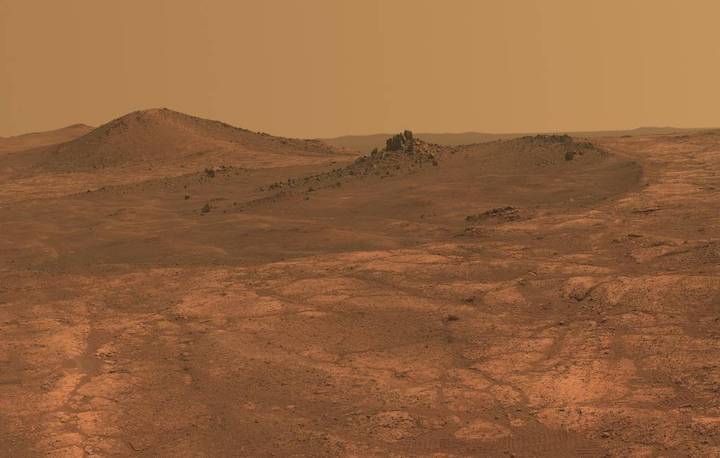 In The Martian, the 2015 film directed by Ridley Scott, astronaut Mark Watney (Matt Damon) is accidentally abandoned alone on Mars by his crewmates after an emergency evacuation, without enough food to survive. Mars is a tricky prospect for even the most red- fingered gardener: there’s almost no air, the “soil” has few nutrients and lots of heavy metals, and the temperature is typically around -60C. “I’m going to have to science the shit out of this,” Watney, a botanist, declares. He decides to grow potatoes, jerry-rigging a climate-controlled dome, burning hydrazine to make water and creating a growth medium from Mars dust supplemented by his crewmates’ faeces.

In Star Trek they just replicate food out of pure energy

One might expect proper scientists who are actually trying to work out how to grow food on Mars, with a view to supporting human life there at some point in the not-so-distant future, to be sniffy about such far-fetched speculation. “The Martian? That’s my favourite movie!” exclaims Dr Wieger Wamelink, a senior ecologist at Wageningen University in the Netherlands, who has been conducting experiments on cultivating plants in space since 2013. “It’s the only sci-fi movie where growing food is very important.”

When Wamelink started his experiments, many people thought his work was left-field and then some. Now, thanks to The Martian, originally a 2011 novel by the American writer Andy Weir, at least they understood what he was trying to achieve. “The movie helped tremendously,” Wamelink says. It also, counterintuitively, supplied hypotheses he can test. “The journey to Mars takes half a year,” he tells me on a video call from his garage in Wageningen, an attractive town on the Rhine, not far from Arnhem. “So store all your poo and pee. That’s your starter kit, what you need to get started in the soil. Actually, The Martian is totally correct there. It may be smelly, but it’s so important.”

The 53-year-old Wamelink, who has a goofy sense of humour and, coincidentally, a passing resemblance to Matt Damon, has a background in plant breeding. Until recently, he had a conventional academic career at the university, which is world-renowned for its work on agriculture and forestry. However, Wamelink kept on being passed over for research grants: he was told once that his proposals were “not innovative enough”.

In the shower one day, Wamelink began to ponder the idea of food production in space. A fanatical Trekkie (“but I don’t go to conventions and I don’t wear costumes”), he found that his immediate point of reference was sci-fi. “In Star Trek, it’s easy: they just replicate food out of pure energy,” says Wamelink. “If you look at Deep Space Nine, Commander Sisko likes to cook and he uses fresh vegetables. But they never show where they come from.” Only in the original Battlestar Galactica series from the late 1970s, in which the fleet was followed by vast “agro ships”, was there a nod to the practicalities of life away from Earth.

Wamelink drew up a new proposal: a theoretical study into growing plants on the Moon and on Mars. He was given €25,000. Wamelink then discovered that you could buy Nasa-endorsed “regolith simulant”, essentially soil from Earth that has many of the properties of that found in space: the “moon” soil came from a desert in Arizona, and the Mars simulant from the side of a volcano on Hawaii, which is then cleaned and rolled to make it more dusty. Wamelink decided to make his experiments practical: what could he actually grow in these weird, nutrient-poor soils?

In a greenhouse, Wamelink began with garden cress, which he planted on 1 April, 2013. “Not a very handy day,” he reflects now, “because nobody believed us when we started it, especially journalists.” Wamelink did not have especially high expectations. He was particularly concerned that lead, mercury and zinc in the soil would end up in the water that the plants absorbed and that they would then be toxic to eat.

But, to Wamelink’s surprise, the cress grew and, crucially, the plant did not take up the heavy metals. In the years since, Wamelink has refined the process. By adding organic matter (leaves and roots from the previous harvest) to the soil and earthworms to break it down, he has radically increased the size and quantity of the plants. He has also expanded the variety of crops: not just cress and salad leaves but tomatoes, peas, radishes and root vegetables such as carrots and potatoes. “Mars will come to fear my botany powers,” Mark Watney predicts in The Martian – and Wamelink intends to make good on the promise.

Moreover, Wamelink’s research suddenly seems much less wacky. Against expectations, a 21st-century space race is under way, driven by national governments and hyper-wealthy private individuals such as Richard Branson and Elon Musk, who created his aerospace company SpaceX from a dream to grow a rose on Mars. Donald Trump wants US astronauts back on the Moon by 2024. The idea of establishing a base there, probably in advance of onward travel to Mars, is clearly on some minds. In January 2019, China’s Chang’e-4 probe became the first spacecraft from any nation to land on the Moon’s far side. The mission took a few seeds, including cotton and potato. A cotton seedling even sprouted for a short period before dying in the harsh cold of the lunar night.

“When I started the experiment I was in contact with Nasa and other space agencies, but the general idea was: ‘Food? Yeah, you just bring it along,’” recalls Wamelink. “It’s boys and toys I always say, so rockets, satellites – things that cost lots of money that you can tinker on. It’s those things they are working on. And well, that’s changed.”

It’s not exactly correct to say that food in space has always been an afterthought. In 1979, Soviet cosmonauts aboard Soyuz 32 took eggs from Japanese quail: there were hopes that the fertilised eggs – a valuable source of lysozyme – could hatch in space and supplement the cosmonauts’ diet with further eggs and meat. It was more complicated than they anticipated and it was not until 1990 that healthy quail chicks hatched (though they struggled especially with feeding in zero gravity and required tiny harnesses). Nasa tried similar experiments with chicken eggs in the 1980s. The Japanese have sent live fish to the International Space Station, and also looked into crop growth and edible insects. However, there’s a new urgency to the research.

“If you’re on the space shuttle for just a week or two, of course, you’re going to take everything with you,” says Dr Gioia Massa, a plant scientist at Nasa’s Kennedy Space Center in Florida. “It’s like a camping trip, you’re not going to do agriculture on short-duration trips. But we’re finally getting to the point where we see going back to the Moon by 2024, we see going on to Mars in the future. These things that were really far out are now coming closer. And you can’t just turn these things on overnight. You have to start testing in advance for when we go there.”

Massa works on Nasa’s Vegetable Production System, known informally as Veggie, which since 2014 has been cultivating plants in and for the International Space Station. The project has had success growing three types of lettuce, Chinese cabbage, red Russian kale, mizuna mustard and zinnia flowers in space. The astronauts are allowed to eat some of what they propagate (the rest comes back for testing), and it supplements their diet of 180 long-life foods, plus around 20 condiments and beverages that they consume on an eight-day cycle. In March, Massa published research that found space lettuce was not only safe to eat, but as nutritious as the crops the Veggie team was producing on Earth.

Like Wamelink, Massa is a sci-fi fan. “Science fiction had a huge impact on me – and still does,” she says on the phone from Florida. “My husband actually teaches science fiction and fantasy at a local university in Orlando. So he’s imagining things and I’m trying to take those imaginings and make them real.”

The Veggie programme, though, differs from Wamelink on how best to grow the crops. Instead of using an approximation of the soil found on the Moon and Mars, Massa and her team have a system she calls “modified hydroponics”: because of the complications of microgravity, the plants are grown in a solid substrate of baked, porous clay, which keeps water and oxygen around the roots. A time-release fertiliser supplies nutrients, light comes from LEDs and the astronauts add water.

It’s not a perfect set-up, Massa concedes. “Veggie is a passive system, and it requires a lot of astronaut time to add water and guessing how much water to add,” she says. “So we’re walking this tightrope between a flood and a drought, and we fall off a lot.” Still, for now, Massa believes that Veggie’s modified hydroponics system has the most potential for supplying astronauts with fresh food in space that is certifiably safe to eat. For example, Martian soil is known to contain perchlorates, a toxic chemical (not present in the simulant soil used by Wamelink) that is poisonous to humans even in very small amounts.

Both Massa and Wamelink agree that if we are to solve the problem of how to grow plants in space, we need to pursue multiple strands of investigation. And no ideas are too outlandish to rule out. Recently, Wamelink has been mulling over how you could get pollinators to Mars: he likes bumblebees (which could hibernate for the six-month journey) and flies, which could also be a source of protein if you are happy to eat the larvae. He’s even been looking into human urine, purified, as a potential source of fertiliser. To get enough raw material to test, Wamelink approached festival organisers in the Netherlands.

Wasn’t he worried about the alcohol concentration? “Yes or even worse! It’s in Amsterdam so…” he replies. “But they do some checks on it and there’s no THC and all those things you get into pee if you smoke some dope. And that’s important because you don’t want to get the people over on Mars sick.”

This all might seem a little esoteric for the regular gardener, but both Massa and Wamelink believe their work will also have an impact on Earth, even in our humble gardens and allotments. Massa points out that Nasa funded the research group that came up with LEDs for plant growth in the 1980s, a technology that is now widely used. The space agency has also invested in Florikan, a controlled-release fertiliser that could help reduce the environmental problem of fertiliser run-off in waterways and estuaries. “Things like urban agriculture, vertical farming, factory farming, we share a lot of information between these groups,” Massa says. “We learn from them, they learn from us.”

Covid-19 has slowed down some of the research, but not for long. Massa can go to the Kennedy Space Center for “mission-essential work” and the Veggie units on the space station continue unhindered. She’s particularly excited that Nasa’s unmanned Perseverance rover is still due to leave for Mars on 17 July, expecting to land in February 2021.

As for Wamelink, he aims to do one major experiment a year and he’s already achieved that in 2020. He is also using the time for reflection and idea generation. “At home, I’ve got a pond and some fruit trees and my own vegetable garden,” he says, looking out of his window. “Really, it’s like being on Mars.”

Mars-Chroniken - Gardens of the galaxy: can you grow vegetables on Mars?
373 Views
Created with page4