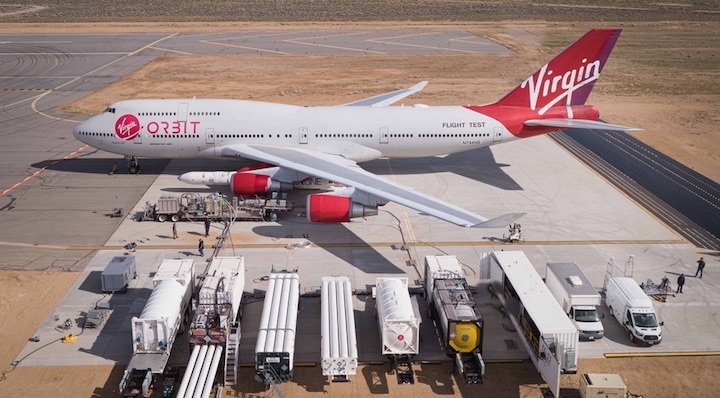 WASHINGTON — Virgin Orbit and the British government are continuing efforts to begin flights of the company’s air-launch system from an English airport by early 2022 despite challenges on both sides of the Atlantic.

Virgin Orbit and the U.K. Space Agency, along with Spaceport Cornwall, held an online suppliers conference June 4 to provide an update about the company’s plans to operate from the southwestern England spaceport, also known as Cornwall Airport Newquay, using its LauncherOne rocket and modified Boeing 747 carrier aircraft.

“We’re confident that we can get to that end goal of that launch towards the end of ’21 or early ’22,” said Miles Carden, spaceport director for the Cornwall Council, which has helped fund infrastructure improvements to the airport in partnership with Virgin Orbit and the U.K. Space Agency.

The main purpose of the meeting was to discuss Virgin Orbit’s procurement of some of that launch infrastructure from British companies. The company will issue a request for proposals in July for a transportable ground operations system, or TGOS, a collection of tanks, generators and other systems used to fuel and prepare the LauncherOne rocket.

The new TGOS, to be manufactured in Britain, will be a portable version of Virgin Orbit’s existing ground support equipment in California that is too large to transport by air. Company officials said at the meeting that TGOS is designed to fit into a cargo version of a 747 with a front-loading door, with enough room to also accommodate two LauncherOne rockets and payloads.

Virgin Orbit expects to select a prime contractor for TGOS by late September, with the goal of having the system certified for use on LauncherOne missions a year later. The company, though, didn’t commit to a specific date for a first launch from Cornwall.

Development of LauncherOne continues after the company’s first launch failed to reach orbit May 25. The LauncherOne rocket successfully separated from the 747 and ignited its engine, but the engine shut down several seconds into flight.

“About 9 seconds after drop, something malfunctioned, causing the booster stage engine to extinguish, which in turn ended the mission,” the company said in a May 27 statement about the launch. “We cannot yet say conclusively what the malfunction was or what caused it, but we feel confident we have sufficient data to determine that as we continue through the rigorous investigation we’ve already begun.”

Company officials didn’t offer new details about the malfunction at the supplier meeting. “We learned a lot, and we’re continuing to learn as we review the data,” said Derrick Boston, chief administrative officer and general counsel of Virgin Orbit, noting that the next LauncherOne rocket is “nearing completion” with several more in various stages of production.

Enabling Virgin Orbit launches from Cornwall also requires work on U.K. launch regulations. During the meeting, participants noted that draft legislation that would allow horizontal launch systems like Virgin Orbit’s was due in March but has yet to be released.

Ian Annett, deputy chief executive of the U.K. Space Agency, said discussions are ongoing with various government agencies, including the Department for Transport. “Clearly, the government’s focus for the moment is on resolving the current pandemic, and therefore legislation that is passing through Parliament is predominantly related to the pandemic, and also, of course, to the E.U. transition,” he said, a reference to the U.K.’s departure from the European Union.

Annett said the U.K. Space Agency was continuing to work with other agencies on the legislation, but didn’t commit to a specific date when it would be released. “My sense is that it’s not a critical path item at the moment,” he said.