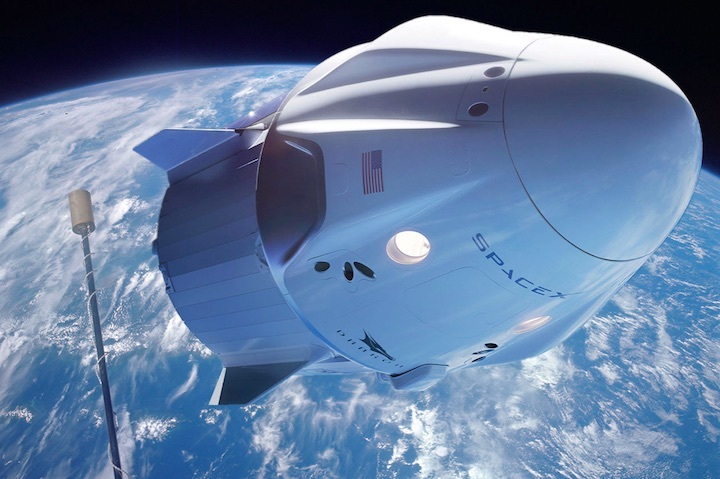 For the first time in nearly nine years, humans will launch from American soil — a feat last seen during the days of the space shuttle, which retired in 2011.

This time, though, they won't be flying on a NASA vehicle. Instead they will be carried in a SpaceX capsule launched atop a SpaceX rocket.

This will make SpaceX the first private company to launch humans to orbit, something previously accomplished by only the government space agencies from the United States, Russia and China.

NASA astronauts Bob Behnken and Doug Hurley will embark on the spaceflight of a lifetime: heading over 250 miles above Earth's surface on an entirely new vehicle that has never been flown by humans before.

SpaceX's Crew Dragon capsule — a modified version of its cargo Dragon capsule that has delivered cargo and supplies to the ISS since 2012 — is unlike any other previous space vehicle.

Here's the difference between Crew Dragon and the now extinct space shuttle and the Russian Soyuz capsule — the only spacecraft currently capable of launching humans to the International Space Station.

Going back to capsule

Unlike the space shuttle, which resembled a plane, Crew Dragon is a teardrop-shaped capsule. Much like the Mercury, Gemini and Apollo capsules during the 1960s and '70s, or the Soyuz capsule that currently launches humans to space.

"A capsule design is a pretty tried and true design, it's a pretty safe design with different onboard capabilities from the pad all the way up into space, which the space shuttle didn't have that capability," Behnken told reporters during a media teleconference May 1 from Houston. "I think from that perspective, it's a reliable design."

Yet despite returning to a capsule, SpaceX's spacecraft is very different from any other previously designed capsule or even Boeing's Starliner, which is being developed under the same NASA contract as the Crew Dragon.

For one thing, Crew Dragon will have a touchscreen for the astronauts to operate instead of a lever, something Behnken and Hurley, who were military test pilots before becoming astronauts, were not accustomed to.

"Growing up as a pilot my whole career, having a certain way to control the vehicles, this is currently different, but you know we went into it with a very open mind," Hurley said during the teleconference. "The difference is that you've got to be very deliberate when you're putting an input with a touchscreen relative to what you would do with a stick because when you're flying an airplane, for example, by pushing (the stick) forward, it's going to go down, (but now) I actually have to make a concerted effort to do that with a touchscreen."

"This spacecraft, Crew Dragon, is SpaceX's design, start to finish and make no mistake of that," Behnken said.

Demonstration Mission 2, or Demo-2, as this mission is dubbed, will also be the first time astronauts fly a commercial space vehicle.

Instead of relying on NASA to own, operate and maintain its own spacecraft, the space agency will instead buy seats on capsules built by private companies. NASA currently pays $86 million per seat to fly astronauts to the ISS on the Soyuz capsule.

Unlike the Soyuz capsule that only takes approximately six hours to head to the ISS when it lifts off the pad at Baikonur Cosmodrome Kazahkstan, Crew Dragon's trip to the space station will last about19 hours from the time it lifts off Kennedy Space Center.

This is due to orbital mechanics, explained Benji Reed, SpaceX director of crew mission management.

That means Dragon could have had a shorter mission if SpaceX and NASA had opted for a different launch date. But like NASA's Commercial Crew Program manager, Kathy Lueders told reporters, this mission's main focus is to test out the capsule with humans onboard. Therefore, teams want to ensure Behnken and Hurley can complete all the criteria and tasks needed on Dragon in order to certify it for crewed flights.

Furthermore, the Soyuz capsule has been operating for decades and it was only in the last few years that it's flight path to the space station shortened, ISS's Program manager, Kirk Shireman told reporters.

But Shireman expects SpaceX to have Dragon also shorten its travel time in the coming years.

"I'm counting on SpaceX to accelerate the time in the next 20 years," he said.