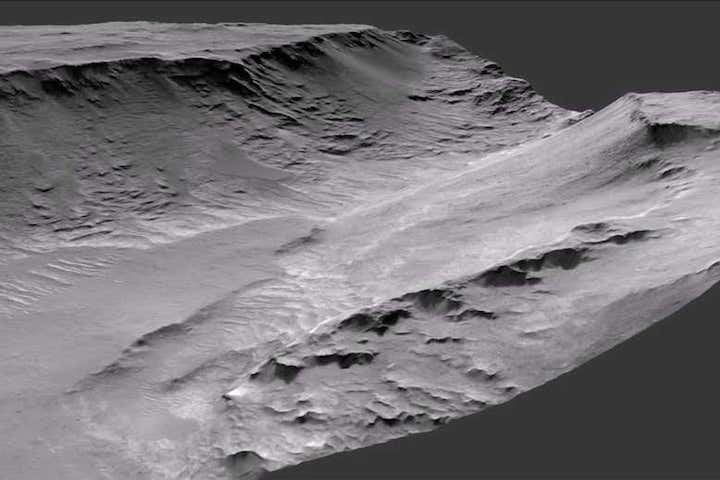 We know from images of Mars’s surface that the planet once had plenty of flowing water, but now we’ve found the first evidence of a river that was there for more than 100,000 years.

Francesco Salese at Utrecht University in the Netherlands and his colleagues discovered a high rocky cliff in the north-western rim of Mars’s Hellas basin that seems to have been formed gradually by the flow of an ancient river.

As rivers moves, they deposit sediment that builds up in layers. The rocky outcrop is 200 metres high – about twice the height of the White Cliffs of Dover – and 1.5 kilometres wide. The sedimentary rocks of the cliff are an estimated 3.7 billion years old. For something of this size to form, it would have required a river that was active for at least 100,000 Earth years.

The team found the outcrop using satellite data from the HiRISE camera aboard NASA’s Mars Reconnaissance Orbiter, which captures imagery of Mars at a resolution of 25 centimetres per pixel.

Satellite pictures of Mars are usually limited to the bird’s eye view, so we only get a snapshot of the top layer of sediment, says Salese.

“We were lucky because this cliff was exposed in the right way,” he says. That allowed the team to analyse the underlying rock layers. The researchers then developed 3D-reconstructions of the area.

“To form these 200-metre-thick deposits we needed conditions that would have required an environment capable of maintaining significant volumes of liquid water,” says Salese. That means the water would have flowed year round, which suggests that Mars once had a water cycle driven by precipitation, similar to that of Earth.

The Hellas basin, in the southern hemisphere of Mars, once hosted a large lake and a network of rivers and deltas. “These geological areas are crucial in our search for evidence of ancient life on Mars,” says Salese.

The NASA Perseverance rover, which is due to fly to Mars in July or August, will investigate similar kinds of rock deposits in other areas of the planet, he adds.