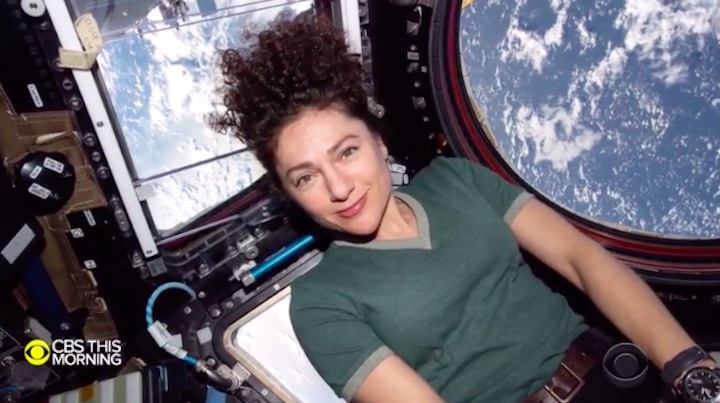 From 250 miles above Earth, NASA astronaut Jessica Meir practiced what you could call extreme social distancing. Down below, a planet grappled with the coronavirus pandemic.

"There were only three people on the space station ... and it was difficult for us to understand: Wow, of the 7.5 billion humans on Earth right now, we are really the only three people that aren't affected by this," Meir told CBS News correspondent Mark Strassmann.

But, that changed a week ago. A Soyuz capsule brought Meir and two crewmates back to Kazakhstan. They landed on a planet in some ways unrecognizable from the one they left.

"We came back to all these masked faces," Meir said. "The people pulling us out of the capsule, they were already wearing masks, so that was really the first human that we saw."

While in orbit, Meir achieved a space milestone. She and astronaut Christina Kochperformed the first all-female spacewalk last October.

But long-duration space missions compromise an astronaut's immune system, so when Meir got back to Houston, she went into quarantine and Koch had to keep back.

"From a distance, we kind of could do a virtual hug," Meir said. "It's quite difficult for me. I'm a hugger, and now I've been up there for seven months and I can't even hug people, so it's pretty difficult."

NASA hopes its mission next month will leave the virus behind. SpaceX will send two NASA astronauts, Doug Hurley and Bob Behnken, to the International Space Station.

They'll become the first Americans launched from U.S. soil since 2011, when the space shuttle retired. But the coronavirus threat may block their families from watching in person.

"I would've said emphatically yes a few weeks ago, but I think we're all just kind of one-day-at-a-timing-it at this point," Hurley said. "And if not, they'll have to watch it from home potentially. I honestly don't know."

Jim Bridenstine, NASA's administrator, said this launch will be different.

"Instead of descending on the Kennedy Space Center, ... this time what we're asking people to do is tune in. Watch it on TV. Watch it on the internet. Stay at home," he said. "This is a moment in time when all of America can come together in the midst of a pandemic and celebrate something positive."

As for Meir, her quarantine has ended and she gets to sleep in her own bed Friday night, but, she said she feels more isolated now than she did in space.

"I think that will come out even more once I do go home. On the space station, you're expecting that kind of isolation. That's just part of the experience. We trained for it. We know it's there," she said. "Here on Earth, we're not used to that."