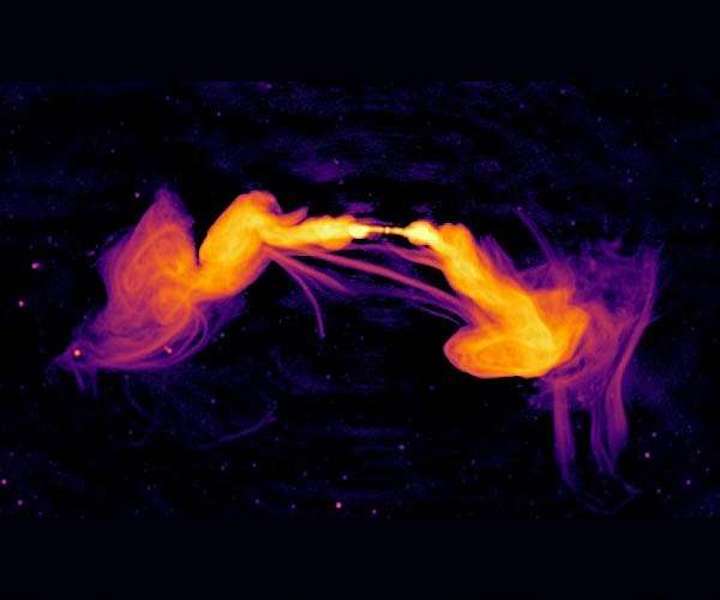 Launched in 2018, the South African MeerKAT radio telescope is a precursor to the Square Kilometre Array (SKA), which aims to answer fundamental astrophysical questions about the nature of objects in the Universe.

ESO 137-006 is a fascinating galaxy residing in the Norma cluster of galaxies, and one of the brightest objects in the southern sky at radio wavelengths.

The classical picture of a radio galaxy consists of an active galactic nucleus (AGN, hosting a growing supermassive black hole), shooting out two jets of plasma filled with particles that move at speeds close to the speed of light. The material within the jets eventually slows down and billows out, forming large radio lobes. ESO 137-006 is characterised by two such lobes of very bright radio emission.

"New features have been uncovered in this galaxy in the form of multiple, extremely collimated threads of radio emission connecting the lobes of the galaxy. The radio emission from the threads is likely synchrotron radiation caused by the high-energy electrons spiralling in a magnetic field," explains Mpati Ramatsoku, a Research Fellow at Rhodes University and lead author of the study.

According to the team that made this discovery, which is composed of collaborators from South Africa and Italy and is partly funded by the European Research Council, further observations and theoretical efforts are required to clarify the nature of these newly discovered features.

Ramatsoku points out that understanding the nature and the physics of these collimated synchrotron threads (CST) could open a new science case for sensitive radio interferometers like MeerKAT and, in the future, the SKA.

"This is exciting because we did not expect it at all," says Professor Oleg Smirnov, Head of the Radio Astronomy Research Group at SARAO. "Such serendipitous discoveries are very important for MeerKAT because it highlights its incredible capacity for finding the 'unknown unknowns' in our Universe," he continues.

An international team of astronomers has uncovered unusual structures and a probable magnetic connection between the two lobes of the radio galaxy ESO 137-006 using the MeerKAT telescope, a precursor to the Square Kilometre Array (SKA). The study, led by Mpati Ramatsoku, was published in the Astronomy and Astrophysics journal

ESO 137-006 is a fascinating galaxy residing 250 million light-years away from us, in the Norma cluster of galaxies, and one of the brightest objects in the southern sky at radio wavelengths. It is characterised by two very bright and bent lobes of radio emission formed by the active galactic nucleus (AGN) of ESO 137-006, which hosts a growing super-massive black hole at its centre. “New features have been uncovered in this galaxy in the form of multiple, extremely collimated threads of radio emission connecting the lobes of the galaxy,” explained the lead author of the study, Mpati Ramatsoku, a Research Fellow at Rhodes University and Associate at INAF, the Italian National Institute for Astrophysics. 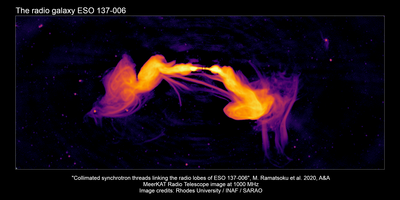 The newly discovered features are providing astronomers with fascinating new insights into the radio galaxy phenomenon. "We were surprised to observe such collimated threads, as these were totally unexpected from what we knew about this class of radio-loud AGNs", said Matteo Murgia a co-author of the study from the INAF - Cagliari Astronomical Observatory. “The properties of these stunning threads are of challenging interpretation. Their emission is likely synchrotron radiation, where radio waves are produced by high-energy electrons spiralling in a magnetic field. These new synchrotron threads show that the radio lobes of radio-loud AGNs could be magnetically connected and that particles could flow into these magnetic channels. However, at present, we have no idea why and when these threads formed nor why they are so collimated and uniform.” 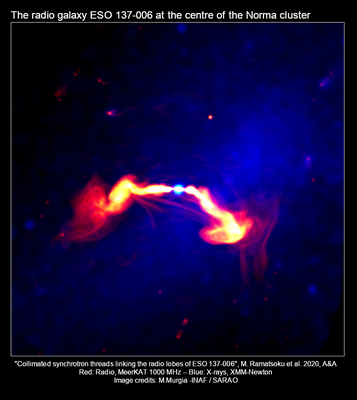 Understanding the nature and the physics of the collimated synchrotron threads (CST) discovered as part of this collaboration could open a new science case for the next generation of sensitive radio interferometers like the SKA and, overall, the next generation on young astronomers involved in solving the great questions already open about our Universe. 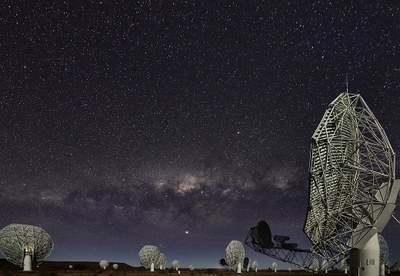 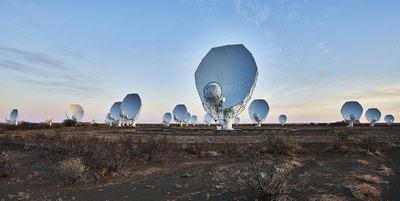 This exciting discovery is the most recent result of the prolific collaboration — partly funded by the European Research Council — between astronomers at INAF, the Rhodes University and the South African Radio Astronomy Observatory (SARAO) which operates MeerKAT. This 64-telescope array was launched in 2018 as a precursor of the Square Kilometre Array, which will be built both in South Africa and Australia in the coming years and involves to date more than 100 organisations in 20 countries, all working together on the biggest project of radio astronomy ever undertaken.