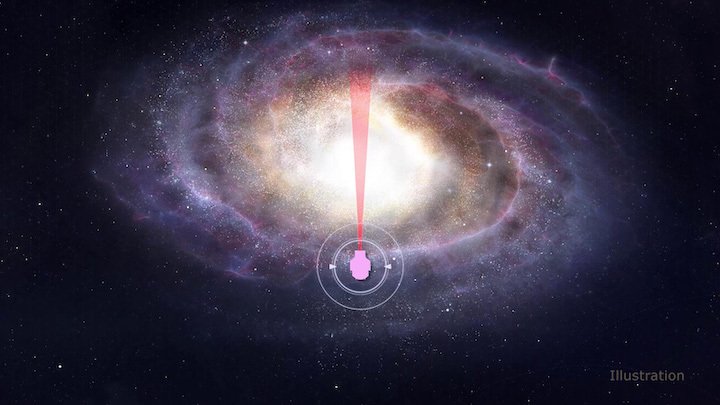 WFIRST will make its microlensing observations in the direction of the center of the Milky Way galaxy. The higher density of stars will yield more exoplanet detections. Credit: NASA's Goddard Space Flight Center/CI Lab

The NASA mission will identify planets with large orbits, similar to our solar system's far-flung giants, Uranus and Neptune.

NASA's Wide Field Infrared Survey Telescope (WFIRST) will search for planets outside our solar system toward the center of our Milky Way galaxy, where most stars are. Studying the properties of exoplanet worlds will help us understand what planetary systems throughout the galaxy are like and how planets form and evolve.

Combining WFIRST's findings with results from NASA's Kepler and Transiting Exoplanet Survey Satellite (TESS) missions will complete the first planet census that is sensitive to a wide range of planet masses and orbits, bringing us a step closer to discovering habitable Earth-like worlds beyond our own.

To date, astronomers have found most planets when they pass in front of their host star in events called transits, which temporarily dim the star's light. WFIRST data can spot transits, too, but the mission will primarily watch for the opposite effect - little surges of radiance produced by a light-bending phenomenon called microlensing. These events are much less common than transits because they rely on the chance alignment of two widely separated and unrelated stars drifting through space.

"Microlensing signals from small planets are rare and brief, but they're stronger than the signals from other methods," said David Bennett, who leads the gravitational microlensing group at NASA's Goddard Space Flight Center in Greenbelt, Maryland. "Since it's a one-in-a-million event, the key to WFIRST finding low-mass planets is to search hundreds of millions of stars."

In addition, microlensing is better at finding planets in and beyond the habitable zone - the orbital distances where planets might have liquid water on their surfaces.

This effect occurs when light passes near a massive object. Anything with mass warps the fabric of space-time, sort of like the dent a bowling ball makes when set on a trampoline. Light travels in a straight line, but if space-time is bent - which happens near something massive, like a star - light follows the curve.

Any time two stars align closely from our vantage point, light from the more distant star curves as it travels through the warped space-time of the nearer star. This phenomenon, one of the predictions of Einstein's general theory of relativity, was famously confirmed by British physicist Sir Arthur Eddington during a total solar eclipse in 1919. If the alignment is especially close, the nearer star acts like a natural cosmic lens, focusing and intensifying light from the background star.

Planets orbiting the foreground star may also modify the lensed light, acting as their own tiny lenses. The distortion they create allows astronomers to measure the planet's mass and distance from its host star. This is how WFIRST will use microlensing to discover new worlds.

"Trying to interpret planet populations today is like trying to interpret a picture with half of it covered," said Matthew Penny, an assistant professor of physics and astronomy at Louisiana State University in Baton Rouge who led a study to predict WFIRST's microlensing survey capabilities. "To fully understand how planetary systems form we need to find planets of all masses at all distances. No one technique can do this, but WFIRST's microlensing survey, combined with the results from Kepler and TESS, will reveal far more of the picture."

More than 4,000 confirmed exoplanets have been discovered so far, but only 86 were found via microlensing. The techniques commonly used to find other worlds are biased toward planets that tend to be very different from those in our solar system. The transit method, for example, is best at finding sub-Neptune-like planets that have orbits much smaller than Mercury's. For a solar system like our own, transit studies could miss every planet.

WFIRST's microlensing survey will help us find analogs to every planet in our solar system except Mercury, whose small orbit and low mass combine to put it beyond the mission's reach. WFIRST will find planets that are the mass of Earth and even smaller - perhaps even large moons, like Jupiter's moon Ganymede.

WFIRST will find planets in other poorly studied categories, too. Microlensing is best suited to finding worlds from the habitable zone of their star and farther out. This includes ice giants, like Uranus and Neptune in our solar system, and even rogue planets - worlds freely roaming the galaxy unbound to any stars.

While ice giants are a minority in our solar system, a 2016 study indicated that they may be the most common kind of planet throughout the galaxy. WFIRST will put that theory to the test and help us get a better understanding of which planetary characteristics are most prevalent.

Hidden Gems in the Galactic Core

WFIRST will explore regions of the galaxy that haven't yet been systematically scoured for exoplanets due to the different goals of previous missions. Kepler, for example, searched a modest-sized region of about 100 square degrees with 100,000 stars at typical distances of around a thousand light-years. TESS scans the entire sky and tracks 200,000 stars; however their typical distances are around 100 light-years. WFIRST will search roughly 3 square degrees, but will follow 200 million stars at distances of around 10,000 light-years.

Since WFIRST is an infrared telescope, it will see right through the clouds of dust that block other telescopes from studying planets in the crowded central region of our galaxy. Most ground-based microlensing observations to date have been in visible light, making the center of the galaxy largely uncharted exoplanet territory. A microlensing surveyconducted since 2015 using the United Kingdom Infrared Telescope (UKIRT) in Hawaii is smoothing the way for WFIRST's exoplanet census by mapping the region.

The UKIRT survey is providing the first measurements of the rate of microlensing events toward the galaxy's core, where stars are most densely concentrated. The results will help astronomers select the final observing strategy for WFIRST's microlensing effort.

The UKIRT team's most recent goal is detecting microlensing events using machine learning, which will be vital for WFIRST. The mission will produce such a vast amount of data that combing through it solely by eye will be impractical. Streamlining the search will require automated processes.

Additional UKIRT results point to an observing strategy that will reveal the most microlensing events possible while avoiding the thickest dust clouds that can block even infrared light.

"Our current survey with UKIRT is laying the groundwork so that WFIRST can implement the first space-based dedicated microlensing survey," said Savannah Jacklin, an astronomer at Vanderbilt University in Nashville, Tennessee, who has led several UKIRT studies. "Previous exoplanet missions expanded our knowledge of planetary systems, and WFIRST will move us a giant step closer to truly understanding how planets - particularly those within the habitable zones of their host stars - form and evolve."

From Brown Dwarfs to Black Holes

The same microlensing survey that will reveal thousands of planets will also detect hundreds of other bizarre and interesting cosmic objects. Scientists will be able to study free-floating bodies with masses ranging from that of Mars to 100 times the Sun's.

The low end of the mass range includes planets that were ejected from their host stars and now roam the galaxy as rogue planets. Next are brown dwarfs, which are too massive to be characterized as planets but not quite massive enough to ignite as stars. Brown dwarfs don't shine visibly like stars, but WFIRST will be able to study them in infrared light through the heat left over from their formation.

Objects at the higher end include stellar corpses - neutron stars and black holes - left behind when massive stars exhaust their fuel. Studying them and measuring their masses will help scientists understand more about stars' death throes while providing a census of stellar-mass black holes.

"WFIRST's microlensing survey will not only advance our understanding of planetary systems," said Penny, "it will also enable a whole host of other studies of the variability of 200 million stars, the structure and formation of the inner Milky Way, and the population of black holes and other dark, compact objects that are hard or impossible to study in any other way."

The FY2020 Consolidated Appropriations Act funds the WFIRST program through September 2020. The FY2021 budget request proposes to terminate funding for the WFIRST mission and focus on the completion of the James Webb Space Telescope, now planned for launch in March 2021. The Administration is not ready to proceed with another multi-billion-dollar telescope until Webb has been successfully launched and deployed.

WFIRST is managed at Goddard, with participation by NASA's Jet Propulsion Laboratory and Caltech/IPAC in Pasadena, the Space Telescope Science Institute in Baltimore, and a science team comprising scientists from research institutions across the United States.