"They got names like superheroes, bigger than The Beatles or I could ever be." 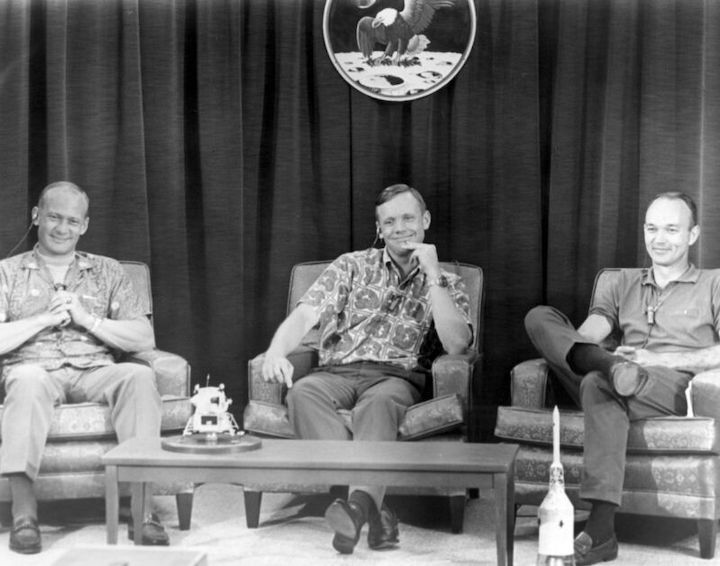 Neil Armstrong was the first human to walk on the Moon. Buzz Aldrin soon followed him onto the lunar surface. And Michael Collins? Well, he remained behind, in lunar orbit. Alone.

For 50 years, he was portrayed by the media as the lonely astronaut. "The emphasis in the press was 'Wasn't I the loneliest person in the whole lonely world in the whole lonely orbit around some lonely thing?'" he recalled during an Explorer's Club event in New York City last year.

Collins insists he was not lonely. After being confined in the small Command Module with Armstrong and Aldrin for a few days, he enjoyed the respite while tracking their activities on the Moon's surface.

But what really happened during those 21 hours? What was really going through Collins' mind as his two colleagues were down on the surface making history?

A co-founder of the band Weezer, US musician Matt Sharp, began to wonder that when reading Collins' Flying to the Moon memoir. That experience set Sharp to writing a song about Collins.

"When friends would ask if I had read anything good recently, I would tell them I was reading about Michael’s extraordinary life and whomever I was talking with would simply ask, 'Who is Michael Collins?'" Sharp said. "And then again, when I was previewing early arrangements of the song for friends, I would tell them that lyrics were being sung from Michael’s perspective, and they would, without exception, hit me with that exact same question, 'Who the hell is Michael Collins!?'"

Much of America would probably ask the same thing, as Collins has neither the fame nor notoriety of Armstrong, the first person on another world, nor Aldrin, who has led a colorful and public life. Collins has remained very much in the background—a sober, graceful, intellectual figure.

Today, Sharp's band, The Rentals, is releasing his song about Collins, titled Forgotten Astronaut. I'm no music critic, but the song's melody and lyrics seem wistful and appropriate for the man and his moment inside a spacecraft above the Moon:

Oh, I know, what I know and I know it's just jealousy
But I feel what I feel, and I feel it endlessly

ollins did actually have a chance to walk on the Moon, but he didn't take it. In his autobiography, chief astronaut Deke Slayton wrote of Collins that he had assigned him to be backup commander of Apollo 14 even before the first Moon landing. That would have put Collins in line to command Apollo 17.

"I brought up the idea with him on a T-38 flight to the Cape," Slayton wrote in Deke!. "He thanked me for the offer, but said that if Apollo 11 went well, he wanted to get out of the astronaut business. He was tired of the grind."

Raumfahrt-History -Michael Collins didn’t land on the Moon, but he got this song written about him
622 Views
Created with page4