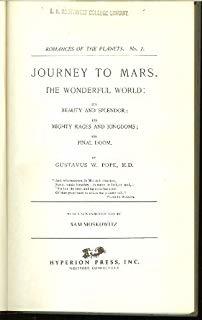 People visiting and living on Mars have been the subjects of science fiction stories, engineering studies and tourist proposals since Gustavus Pope's adventure story, "Journey to Mars" in 1894. Mission plans have included landing humans on Mars for exploration at a minimum, and with the possibility of sending settlers and terraforming the planet.

Serious mission design activities have been ongoing for the past 70 years. The list of crewed mission plans is extensive. For example, scientific expeditions which involve small groups might visit Mars for a period of up to a year, and this might later lead to permanent colonies.

Most recently, space agencies in the US, Europe and Asia have been developing comprehensive proposals that might lead to Martian visits sometime within the next two decades.

Getting to Mars is not easy. Due to heliocentric orbital geometry and the physics of space flight, the energy needed to transfer from Earth to Mars is at its relative lowest levels at 26-month intervals. In other words, the launch window for a low-energy transfer to Mars opens every 26 months.

To further complicate such missions, due to the eccentricity of Mars' orbit, the energy needed in the low-energy windows is not always the same, but varies on roughly a 15-year cycle. Thus, in the 20th century true minimums occurred in 1969, 1971, 1986 and 1988. The next very-low-energy launch window occurs in 2033.

Low-energy heliocentric transfers from Earth to Mars are known as Hohmann transfers, which involve transit times of approximately 9 months. A minimum-energy return trip to Earth will require spending at least 500 days at Mars until an appropriate launch window opens.

Mission symmetry would then dictate a travel time of about 9 months to return to Earth. Thus, a minimum energy round trip to Mars might require a total of about 35 months. It is possible to shorten the travel time between planets, but at significantly higher energy levels.

Once the planet is reached the heliocentric transfer results in a very high approach speed. In order to land on Mars the spacecraft must decelerate either by using descent rockets or aerocapture techniques. In either case there must be a limit on the maximum force experienced by the crew. Scientific consensus indicates that the maximum allowable deceleration should be 5 times Earth's gravity, or 5 Gs.

In addition to the Martian descent forces there are several other important physical challenges for humans:

In summary, human travel to and from Mars presents extreme challenges, complex technologies and extraordinary crews.