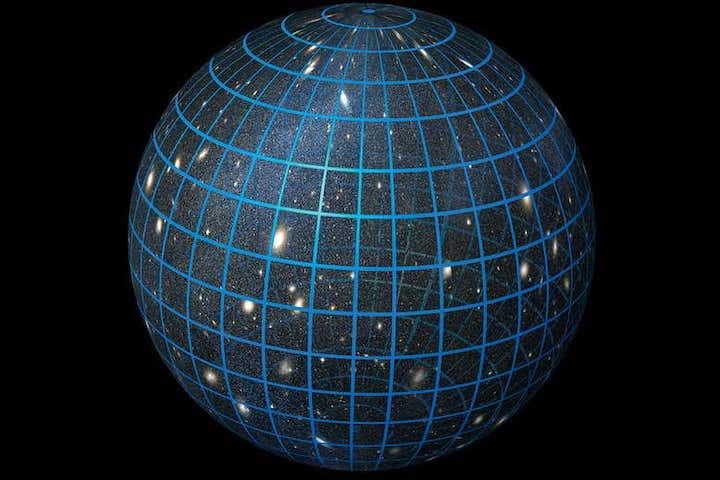 Travel far enough in the universe and you could end up back where you began. Measurements from the Planck space observatory have shown that the universe might be shaped like a sphere rather than a flat sheet, which would change nearly everything we think we know about the cosmos.

The Planck observatory, which operated from 2009 to 2013, mapped the cosmic microwave background, a sea of light left over from the big bang.

One set of observations showed that there was more gravitational lensing – stretching of the light due to the shape of space-time, which can be distorted by heavy matter – than expected. Alessandro Melchiorri at the Sapienza University of Rome and his colleagues calculated that this could be because the shape of the universe is different from what we thought.

All other cosmological data suggests the universe is flat, meaning it has no curvature, similar to a sheet of paper. These Planck measurements indicate that it could be “closed”, or spherical, which would mean that if you travelled far enough in one direction, you would end up back where you started. That is because the extra lensing implies the presence of extra dark matter, which would pull the universe into a finite sphere instead of a flat sheet.

According to these observations, the universe is 41 times more likely to be closed than flat. “This is the most precise cosmological data and it is giving us a different picture,” says Melchiorri.

If the universe is indeed closed, that could be a major problem for our understanding of the cosmos. Another cosmological puzzle is that the nearby universe seems to be expanding faster than it ought to. This is tough to explain with our standard model of cosmology, which includes a flat universe, and the team calculated that this gets even tougher with a spherical universe, along with a few other cosmic mismatches we have yet to explain. It is so bad that they are calling it a “cosmological crisis”.

“In a closed universe, these anomalies are more serious than we thought,” says Melchiorri. “If nothing is in agreement, we have to think hard about our model of the universe and its formation.”

The usual explanation of the universe’s formation includes a period just after the big bang called inflation, when the universe rapidly expanded. Our current models of inflation naturally lead to a flat universe, so if the universe is actually closed, they would have to change.

“We need a new model, and we don’t know what that is yet,” says Melchiorri. Nobody has come up with a way to reconcile these Planck observations with the many cosmological measurements that disagree, which even include some of the other observations from the Planck observatory.

In fact, every other cosmological measurement that we have points to a flat universe. There are no other observations that hint the cosmos may actually be closed, and there is a chance that this Planck measurement is just a statistical fluke.

“If this is true, it would have profound implications on our understanding of the universe,” says David Spergel at Princeton University. “It’s a really important claim, but I’m not sure it’s one that’s backed by the data. In fact, I’d say the evidence is actually against it.”

More data in the next few years will show whether we need to take this anomaly seriously or if it is simply a statistical fluke, says Spergel. The Simons Observatory, which is currently being built in Chile, will be able to measure gravitational lensing even more precisely than Planck, and it should tell us whether or not there really is a cosmological crisis.

Astronomie - Cosmological crisis: We don't know if the universe is round or flat
« Zum vorherigen Eintrag Zum nächsten Eintrag »
1009 Views
Created with page4