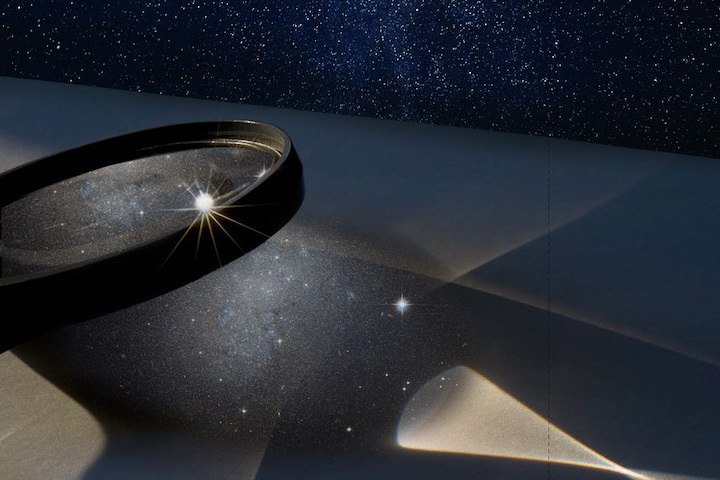 Researchers have for the first time used a massive cluster of galaxies as a huge magnifying lens to detect a small, star-forming dwarf galaxy.

Astronomers at MIT and elsewhere have used a massive cluster of galaxies as an X-ray magnifying glass to peer back in time, to nearly 9.4 billion years ago. In the process, they spotted a tiny dwarf galaxy in its very first, high-energy stages of star formation.

While galaxy clusters have been used to magnify objects at optical wavelengths, this is the first time scientists have leveraged these massive gravitational giants to zoom in on extreme, distant, X-ray-emitting phenomena.

What they detected appears to be a blue speck of an infant galaxy, about 1/10,000 the size of our Milky Way, in the midst of churning out its first stars — supermassive, cosmically short-lived objects that emit high-energy X-rays, which the researchers detected in the form of a bright blue arc.

“It’s this little blue smudge, meaning it’s a very small galaxy that contains a lot of super-hot, very massive young stars that formed recently,” says Matthew Bayliss, a research scientist in MIT’s Kavli Institute for Astrophysics and Space Research. “This galaxy is similar to the very first galaxies that formed in the universe … the kind of which no one has ever seen in X-ray in the distant universe before.”

Bayliss says the detection of this single, distant galaxy is proof that scientists can use galaxy clusters as natural X-ray magnifiers, to pick out extreme, highly energetic phenomena in the universe’s early history.

“With this technique, we could, in the future, zoom in on a distant galaxy and age-date different parts of it — to say, this part has stars that formed 200 million years ago, versus another part that formed 50 million years ago, and pick them apart in a way you cannot otherwise do,” says Bayliss, who will be moving on to the University of Cincinnati as an assistant professor of physics.

He and his co-authors, including Michael McDonald, assistant professor of physics at MIT, have published their results today in the journal Nature Astronomy.

A candle in the light

Galaxy clusters are the most massive objects in the universe, composed of thousands of galaxies, all bound together by gravity as one enormous, powerful force. Galaxy clusters are so massive, and their gravitational pull is so strong, that they can distort the fabric of space-time, bending the universe and any surrounding light, much like an elephant would stretch and warp a trapeze net.

Scientists have used galaxy clusters as cosmic magnifying glasses, with a technique known as gravitational lensing. The idea is that if scientists can approximate the mass of a galaxy cluster, they can estimate its gravitational effects on any surrounding light, as well as the angle at which a cluster may deflect that light.

For instance, imagine if an observer, facing a galaxy cluster, were trying to detect an object, such as a single galaxy, behind that cluster. The light emitted by that object would travel straight toward the cluster, then bend around the cluster. It would continue traveling toward the observer, though at slightly different angles, appearing to the observer as mirrored images of the same object, which in the end can be combined as a single, “magnified” image.

Scientists have used galaxy clusters to magnify objects at optical wavelengths, but never in the X-ray band of the electromagnetic spectrum, mainly because galaxy clusters themselves emit an enormous amount of X-rays. Scientists have thought that any X-rays coming from a background source would be impossible to discern from the cluster’s own glare.

“If you’re trying to see an X-ray source behind a cluster, it’s like trying to see a candle next to a really bright light,” Bayliss says. “So we knew this was a challenging measurement to make.”

The researchers wondered: Could they subtract that bright light and see the candle behind it? In other words, could they remove the X-ray emissions coming from the galaxy cluster, to view the much fainter X-rays coming from an object, behind and magnified by the cluster?

The team tested this idea with observations taken by NASA’s Chandra X-ray Observatory, one of the world’s most powerful X-ray space telescopes. They looked in particular at Chandra’s measurements of the Phoenix cluster, a distant galaxy cluster located 5.7 billion light-years from Earth, which has been estimated to be about a quadrillion times as massive as the sun, with gravitational effects that should make it a powerful, natural magnifying lens.

“The idea is to take whatever your best X-ray telescope is — in this case, Chandra — and use a natural lens to magnify and effectively make Chandra bigger, so you can see more distant things,” Bayliss says.

He and his colleagues analyzed observations of the Phoenix cluster, taken continuously by Chandra for over a month. They also looked at images of the cluster taken by two optical and infrared telescopes — the Hubble Space Telescope and the Magellan telescope in Chile. With all these various views, the team developed a model to characterize the cluster’s optical effects, which allowed the researchers to precisely measure the X-ray emissions from the cluster itself, and subtract it from the data.

They were left with two similar patterns of X-ray emissions around the cluster, which they determined were “lensed,” or gravitationally bent, by the cluster. When they traced the emissions backward in time, they found that they all originated from a single, distant source: a tiny dwarf galaxy from 9.4 billion years ago, when the universe itself was roughly 4.4 billion years old — about a third of its current age.

“Previously, Chandra had seen only a handful of things at this distance,” Bayliss says. “In less than 10 percent of the time, we discovered this object, similarly far away. And gravitational lensing is what let us do it.”

The combination of Chandra and the Phoenix cluster’s natural lensing power enabled the team to see the tiny galaxy hiding behind the cluster, magnified about 60 times. At this resolution, they were able to zoom in to discern two distinct clumps within the galaxy, one producing many more X-rays than the other.

As X-rays are typically produced during extreme, short-lived phenomena, the researchers believe that the first X-ray-rich clump signals a part of the dwarf galaxy that has very recently formed supermassive stars, while the quieter region is an older region that contains more mature stars.

“We’re catching this galaxy at a very useful stage, where it’s got these really young stars,” Bayliss says. “Every galaxy had to start out in this phase, but we don’t see a lot of these kinds of galaxies in our own neighborhood. Now we can go back in time, look in the distant universe, find galaxies in this early phase of their life, and start to study how star formation is different there.”

This research was funded, in part, by NASA, and by the Space Telescope Science Institute.