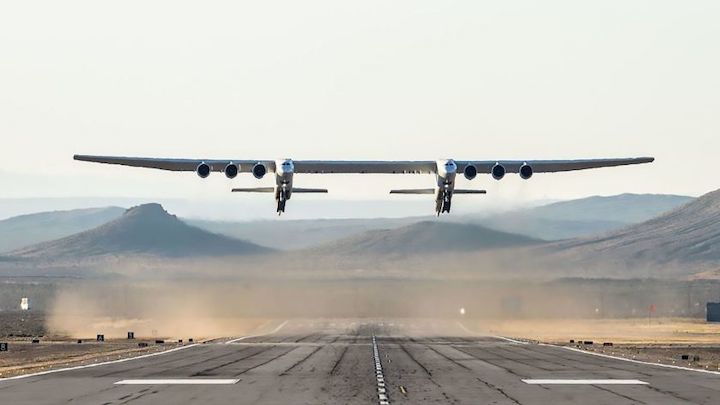 The Stratolaunch plane flies above Mojave, Calif., on April 13 during its first test flight.

Stratolaunch was advertised as a way to make launching satellites as routine as operations at an airport.

Now, just six months after the massive rocket-launching plane finally took its first flight over California’s Mojave Desert — and a year after billionaire founder Paul Allen’s death — the company has a new owner.

Stratolaunch said Friday that it has “transitioned ownership” but will be continuing regular operations. In the near term, the company said in a statement, it will focus on providing rocket-powered testbeds and “associated flight services.”

The company did not say who its new owner is. Two people familiar with the matter said, without providing further specifics, that it is a group of investors.

A spokeswoman for Stratolaunch declined to comment on the date of the sale, terms of the deal or where the new owner is based. Jean Floyd remains chief executive, a role he has held since 2015.

Testing and operation of the massive carrier aircraft will now be done in-house, Stratolaunch said. Previously, Mojave, Calif.-based Scaled Composites, a subsidiary of Northrop Grumman Corp., built and test flew the plane. It’s unclear where Stratolaunch will do that work, but the company put up at least 10 job listings on LinkedIn in the last month for positions including systems safety engineer, test pilot and quality manager. Of those 10 jobs, eight were located in Mojave and two in Seattle.

Stratolaunch was a passion project of Allen’s. He said in 2011 as he unveiled plans for the plane that he hoped it would give future children “something to search for in the night sky and dream about.” After his death, there was much speculation about the project’s future.

The company began to scale back its grandiose plans in January, announcing it would stop development of a rocket engine and two planned satellite-launching rockets, as well as a rocket-powered plane intended to take crews to space. Stratolaunch also reportedly laid off dozens of employees. The Seattle-based company had staff scattered throughout the country, including in Mojave, Huntsville, Ala., and Washington, D.C. Stratolaunch said at the time that it was focusing resources on the plane’s first test flight.

The plane has a wingspan of 385 feet — longer than a football field — and has two fuselages that make it look like conjoined-twin planes. The design allows a satellite-tipped rocket to be carried between the fuselages until the plane reaches an altitude of about 35,000 feet. At that point, the rocket would be released and its own engine would ignite to carry the satellite toward its final destination.

The so-called air-launch platform is seen as a way to give customers more flexibility for where and when they launch. Established launch sites, such as Vandenberg Air Force Base near Lompoc, Calif., and Kennedy Space Center in Florida, could eventually get crowded, and weather issues around the area can often result in scrubs.

With an air-launch platform, satellites could be launched from anywhere with a runway, industry experts have said. There would be less costly launch facilities. And launching rockets closer to the equator, for example, gives better access to many orbital inclinations.

But analysts said Stratolaunch was more a manifestation of Allen’s vision for space ventures than a market-driven project.

Over the years, the company shuffled through several potential rocket suppliers, starting with Elon Musk’s SpaceX. But SpaceX later decided to focus on developing its own Falcon 9 rocket rather than creating a variant for Stratolaunch.

Stratolaunch later teamed with Orbital ATK, but that partnership was shelved after the satellite market evolved and the initial project was no longer able to meet customer needs.

British billionaire Richard Branson’s firm Virgin Orbit is working on a similar concept, with a modified Boeing 747 plane serving a similar function to the behemoth developed by Stratolaunch. The Long Beach-based company is still testing its aircraft.