Our Milky Way is a frugal galaxy. Supernovas and violent stellar winds blow gas out of the galactic disk, but that gas falls back onto the galaxy to form new generations of stars. In an ambitious effort to conduct a full accounting of this recycling process, astronomers were surprised to find a surplus of incoming gas.

"We expected to find the Milky Way's books balanced, with an equilibrium of gas inflow and outflow, but 10 years of Hubble ultraviolet data has shown there is more coming in than going out," said astronomer Andrew Fox of the Space Telescope Science Institute, Baltimore, Maryland, lead author of the study to be published in The Astrophysical Journal.

Fox said that, for now, the source of the excess inflowing gas remains a mystery. 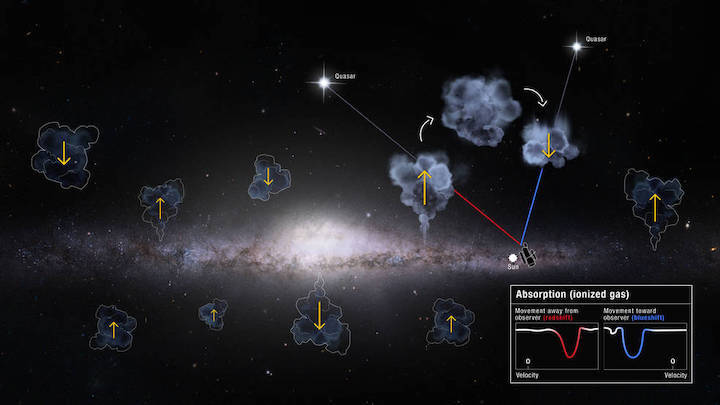 This illustration envisions the Milky Way galaxy's gas recycling above and below its stellar disk. Hubble observes the invisible gas clouds rising and falling with its sensitive Cosmic Origins Spectrograph (COS) instrument. The spectroscopic signature of the light from background quasars shining through the clouds gives information about their motion. Quasar light is redshifted in clouds shooting up and away from the galactic plane, while quasar light passing through gas falling back down appears blueshifted. This differentiation allows Hubble to conduct an accurate audit of the outflowing and inflowing gas in the Milky Way's busy halo — revealing an unexpected and so-far unexplained surplus of inflowing gas.
Credits: NASA, ESA and D. Player (STScI)

One possible explanation is that new gas could be coming from the intergalactic medium. But Fox suspects the Milky Way is also raiding the gas "bank accounts" of its small satellite galaxies, using its considerably greater gravitational pull to siphon away their resources. Additionally, this survey, while galaxy-wide, looked only at cool gas, and hotter gas could play a role, too.

The new study reports the best measurements yet for how fast gas flows in and out of the Milky Way. Prior to this study, astronomers knew that the galactic gas reserves are replenished by inflow and depleted by outflow, but they did not know the relative amounts of gas coming in compared to going out. The balance between these two processes is important because it regulates the formation of new generations of stars and planets.

Astronomers accomplished this survey by collecting archival observations from Hubble’s Cosmic Origins Spectrograph (COS), which was installed on the telescope by astronauts in 2009 during its last servicing mission. Researchers combed through the Hubble archives, analyzing 200 past ultraviolet observations of the diffuse halo that surrounds the disk of our galaxy. The decade's worth of detailed ultraviolet data provided an unprecedented look at gas flow across the galaxy and allowed for the first galaxy-wide inventory. The gas clouds of the galactic halo are only detectable in ultraviolet light, and Hubble is specialized to collect detailed data about the ultraviolet universe.

"The original Hubble COS observations were taken to study the universe far beyond our galaxy, but we went back to them and analyzed the Milky Way gas in the foreground. It's a credit to the Hubble archive that we can use the same observations to study both the near and the more distant universe. Hubble's resolution allows us to simultaneously study local and remote celestial objects," noted Rongmon Bordoloi of North Carolina State University in Raleigh, North Carolina, a co-author on the paper.

Because the galaxy's gas clouds are invisible, Fox's team used light from background quasars to detect these clouds and their motion. Quasars, the cores of active galaxies powered by well-fed black holes, shine like brilliant beacons across billions of light-years. When the quasar's light reaches the Milky Way, it passes through the invisible clouds.

The gas in the clouds absorbs certain frequencies of light, leaving telltale fingerprints in the quasar light. Fox singled out the fingerprint of silicon and used it to trace the gas around the Milky Way. Outflowing and inflowing gas clouds were distinguished by the Doppler shift of the light passing through them — approaching clouds are bluer, and receding clouds are redder.

Currently, the Milky Way is the only galaxy for which we have enough data to provide such a full accounting of gas inflow and outflow.

"Studying our own galaxy in detail provides the basis for understanding galaxies across the universe, and we have realized that our galaxy is more complicated than we imagined," said Philipp Richter of the University of Potsdam in Germany, another co-author on the study.

Future studies will explore the source of the inflowing gas surplus, as well as whether other large galaxies behave similarly. Fox noted that there are now enough COS observations to conduct an audit of the Andromeda galaxy (M31), the closest large galaxy to the Milky Way.

The Hubble Space Telescope is a project of international cooperation between ESA (the European Space Agency) and NASA. NASA's Goddard Space Flight Center in Greenbelt, Maryland, manages the telescope. The Space Telescope Science Institute (STScI) in Baltimore, Maryland, conducts Hubble science operations. STScI is operated for NASA by the Association of Universities for Research in Astronomy in Washington, D.C.