First all appears quiet. Suddenly, a bright flash lights up the telescope. In an instant, jets of super-heated plasma bloom against the blackness of space.

Seen from Earth, solar flares put on an elegant show. But these dancing plasma ribbons are the shrapnel of violent explosions. The energetic process that fuels them, known as magnetic reconnection, doesn't just power flares. Magnetic reconnection shapes the behavior of plasma, or electrified gas, which makes up more than 99% of the observable universe. Yet the antics of magnetic reconnection are only partly understood — and eruptions on the Sun are among the best places to study them.

ESIS will take a 15-minute flight above Earth’s atmosphere to observe eruptions in a layer of the Sun called the transition region. By watching subtle shifts in light, ESIS will trace these explosions back to their source. The goal is to assess if they bloom from a single point, or instead shoot from many disconnected locations. The NASA-funded rocket will launch from the White Sands Missile Range in New Mexico on Sept. 24, 2019.

Solar flares were first documented in 1859, but it was another ninety years before scientists proposed that magnetic reconnection was the trigger.

Magnetic reconnection occurs when two opposing magnetic field lines bump into each other and explosively reconfigure. When it occurs in flares, the result is a bright flash — with effects that can reach Earth. Solar flares emit X-ray light and energetic particles that, if Earth-directed, can endanger astronauts and satellites. 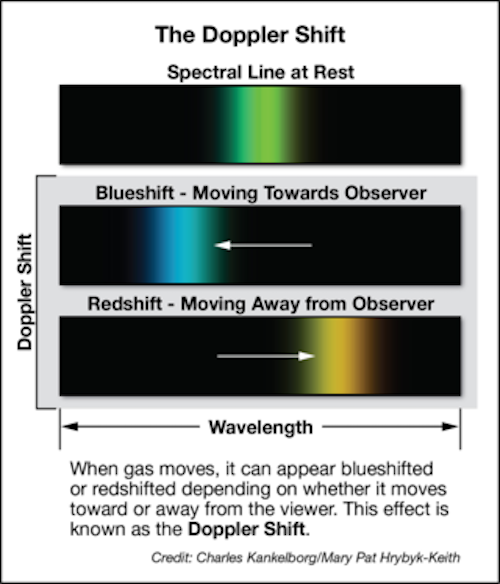 The trouble with using flares to study magnetic reconnection is just how unpredictable they are. “It’s very difficult to schedule a flare during your launch,” said Kankelborg, laughing. “But you can launch at any time and see many explosions in the transition region.”

The solar transition region is sixty-mile thick sliver of Sun sandwiched between two extremes. On one side is the comparatively cool, 10-thousand-degree Fahrenheit solar surface. On the other, the super-heated outer atmosphere some 300 times hotter. The transition region is home to a slew of magnetic eruptions that, though smaller than flares, occur much more often.

From Earth, most of these eruptions are seen dead-on, a less-than-ideal angle that makes them blend in with many other bright spots on the Sun. To find genuine eruptions, the ESIS team uses an oft-used technique known as the Doppler shift, but in a way tailored to explosive events (see sidebar).

They start with the fact that gases at certain temperatures emit unique wavelengths of light, known as their spectral lines. For example, at about 90,000 degrees Fahrenheit, ionized helium — which has lost one of its two electrons — emits light at a wavelength of 30.4 nanometers. That wavelength is like helium's fingerprint, a way of telling its there from afar.

When gases move, their spectral lines move along with them. This is the Doppler shift. When a gas is approaching you, its wavelength gets blueshifted, or scrunched up towards the bluer end of the spectrum. 30.4 nanometers might become the slightly shorter 30.39 nanometers. Light from a source rapidly moving away is stretched out, or redshifted, becoming slightly more red.

The Doppler shift tells scientists if a light source is coming or going. But what happens when it explodes? 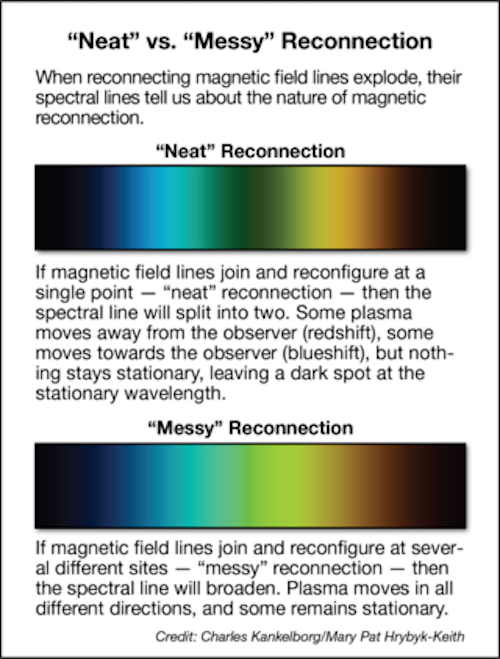 Depending on the shape of the explosion, a spectral line can either split into two, or broaden into one large bump. Which one it does will help the ESIS team answer their primary question: whether magnetic reconnection is neat, or messy (see sidebar).

The evidence so far is mixed. On a previous rocket flight, Kankelborg’s former student Tom Rust observed explosions that split cleanly into two. The results supported the neat model. “But that’s not terribly conclusive, because we were looking at only one wavelength,” said Kankelborg. A more diverse dataset might tell a different story. In fact, the Interface Region Imaging Spectrograph or IRIS satellite, on which Kankelborg is a co-Investigator, has seen evidence for broadening spectral lines, supporting the messy model. Since these were observations of different explosions, making a comparison is difficult.

ESIS’s upcoming flight will be the first chance to straighten out exactly what they’re seeing. The rocket team is coordinating their observations with NASA’s IRIS and the JAXA/NASA Hinode mission to view these explosions from all these observatories at once.

“If we manage to see the same explosive events with all of these instruments, we’ll have an incredibly comprehensive view,” said Kankelborg.

ESIS will launch on a Black Brant IX sounding rocket to an estimated altitude of 160 miles high, for five minutes total observing time. The rocket will observe spectral lines from three different elements at temperatures between 8,500 degrees F and 1.8 million degrees F. After the flight, the payload’s parachute will deploy as it drifts back to the surface for recovery.