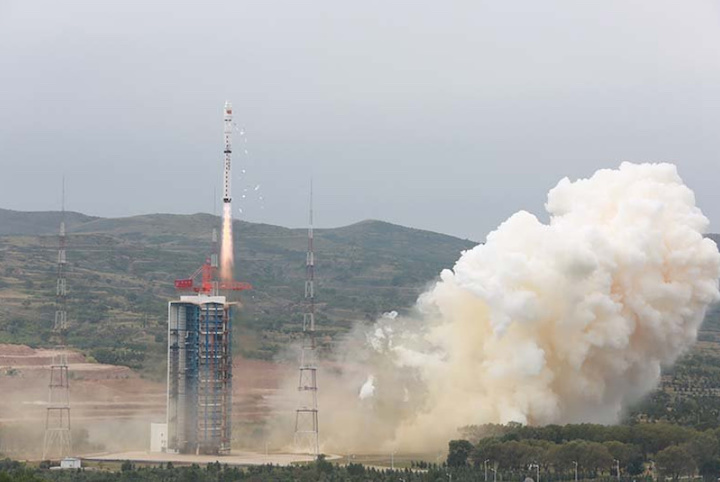 The launch returns the Long March 4 to flight after an issue with “structural resonance” between the third stage and the payload on a Long March 4C led to the loss of the Yaogan Weixing-33 mission on May 22.

Onboard were also the BNU-1 / Jingshi-1 satellite and the small Taurus-1 satellite.

The Ziyuan satellites are remote sensing vehicles capable of obtaining images and other data that can be used for planning, monitoring, crop yield monitoring and monitoring of natural disaster areas, as well as conducting field experiments in space sciences.

Information from various sources in China indicates that cameras aboard the Ziyuan-2 have a higher resolution than cameras used on the Ziyuan-1 / CBERS satellite launched in 1999. Ziyuan-2 vehicles are one of the largest satellites developed by China and its stabilization technology on its three space axes represented one of the biggest advances in Chinese space technology.

However, Western military intelligence sources point out that while China states that the Ziyuan-2 are civilian application satellites, these were the first high-resolution military vehicles under the code name Jian Bing-3 (JB -3).

These satellites can also maneuver in Earth orbit, adjusting it after launch. Chinese scientists have countered these claims by saying that the Ziyuan-2 only has a resolution of 60 – 100 meters and is useless for military purposes.

In fact, the purpose of the Ziyuan-2 may have a dual civil and military application.

The ZY-1 02D satellite is similar to the Chinese-Brazilian CBERS 2B / ZY-1 02B, but only using Chinese instruments, being a follow-on version to the ZY-1 02C satellite launched on December 22, 2011.

The new satellite is equipped with improved imaging systems, using a 9-band visible near-infrared camera and a 166-band hyperspectral camera.

The visible NIR camera has a ground resolution of 5 m with a swath width of 115 km. The camera image has high geometric precision and the image positioning accuracy is better than 50 meters, with high spectral resolution and better image information. The satellite will operate on a circular orbit at 778 km altitude.

It also carries a 166-band hyperspectral camera that can produce 166 pictures with different color bands simultaneously. The camera can capture the reflected light information of various minerals, and be used to analyze complicated mineral compositions and distribution. The satellite can also be used to observe chlorophyll concentration, water transparency and total suspended matter concentration in lakes to help monitor the environment and prevent water pollution.

The satellites were designed and built by the Chinese Academy of Space Technology and were developed indigenously based on the Phoenix-Eye-2 bus.

After a year of design and development, the project will be run by the Southern Marine Science and Engineering Guangdong Laboratory (Zhuhai). As the first test satellite of the system, BNU-1 will conduct all-weather polar climate and environmental observations in Earth orbit.

BNU-1 will completely cover the Antarctic and the Arctic within 5 days and to monitor sea ice drift and ice shelf collapse, which will greatly improve China’s remote sensing capability. The technical dependence makes up for the shortcomings of China’s polar observation data.

According to Mr. Cheng Xiao, the chief scientist of BNU-1, satellite data will also be used to study global climate change, while monitoring the middle and low latitudes to assist in expanding the Arctic shipping route to the Qinghai-Tibet Plateau or the Third Polar Region.

Jinniuzuo-1 is a 3U-CubeSat developed by Shanghai Aerospace Science and Technology Co., Ltd. (Aes Space). The small satellite will test a 2.5 m2 drag sail to accelerate deorbiting and the amateur radio system onboard will provide telecommand, telemetry and an FM to codec2 digital audio V/U repeater with 67Hz PL tone.

The feasibility study of the CZ-4 Chang Zheng-4 began in 1982 based on the FB-1 Feng Bao-1 launch vehicle. Engineering development was initiated in the following year. Initially, the Chang Zheng-4 served as a backup launch vehicle for Chang Zheng-3 to launch China’s communications satellites.

After the successful launch of China’s first DFH-2 communications satellites by Chang Zheng-3, the main mission of the Chang Zheng-4 was shifted to launch sun-synchronous orbit meteorological satellites. On the other hand, the Chang Zheng-4B launch vehicle was first introduced in May 1999 and also developed by the Shanghai Academy of Space Flight Technology (SAST), based on the Chang Zheng-4.

Other modifications were an improved telemetry, tracking, control, and self-destruction systems with smaller size and lighter weight; a revised nozzle design in the second stage for better high-altitude performance; a propellant management system for the second stage to reduce the spare propellant amount, thus increasing the vehicle’s payload capability and a propellant jettison system on the third-stage.

Situated in the Kelan County in the northwest part of the Shanxi Province, the Taiyuan Satellite Launch Center (TSLC) is also known by the Wuzhai designation. It is used mainly for polar launches (meteorological, Earth resources and scientific satellites).

The launch center has two single-pad launch complexes, a technical area for rocket and spacecraft preparations, a communications center, a mission command and control center, and a space tracking center.

The stages of the rocket were transported to the launch center by railway and offloaded at a transit station south of the launch complex. They were then transported by road to the technical area for checkout procedures.

The launch vehicles were assembled on the launch pad by using a crane at the top of the umbilical tower to hoist each stage of the vehicle in place. Satellites were airlifted to the Taiyuan Wusu Airport about 300km away and then transported to the center by road.

The TT&C Centre, also known as Lüliang Command Post, is headquartered in the city of Taiyuan, It has four subordinate radar tracking stations in Yangqu (Shanxi), Lishi (Shanxi), Yulin (Shaanxi), and Hancheng (Shaanxi).

While the speculation continues about the return to flight of the heavy Long March-5 launch vehicle – the major piece for the short medium-term future of its space program – China continues with its surge of launches. Next in line is the launch of two new navigation satellites from the Xichang Satellite Launch Center that will probably take place on September 24 using the Long March-3B/YZ-1 (Y65) rocket.

Also in September, we can expect the launch of multiple satellites (the Zhuhai-1 Group 03 satellites and some Tianyi small birds) using a Long March-11 launch vehicle from the Jiuquan Satellite Launch Center.

China also plans to conduct nine Kuaizhou-1A launches before the end of 2019, with four of them to be launched in sequence in December.