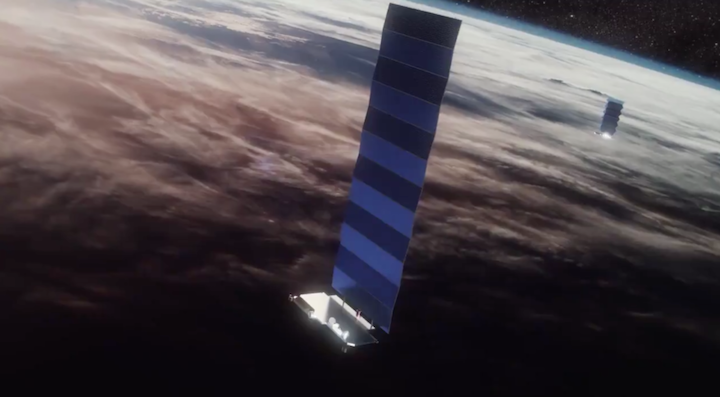 WASHINGTON — The European Space Agency said Sept. 2 it maneuvered one of its Earth science satellites to avoid a potential collision with a SpaceX Starlink satellite, the first time the agency said it’s had to maneuver to avoid a satellite associated with a broadband megaconstellation.

In a series of tweets from its ESA Operations account, the agency said the Aeolus satellite performed a maneuver to avoid a potential close approach to a Starlink satellite, which it identified in one graphic as Starlink 44. 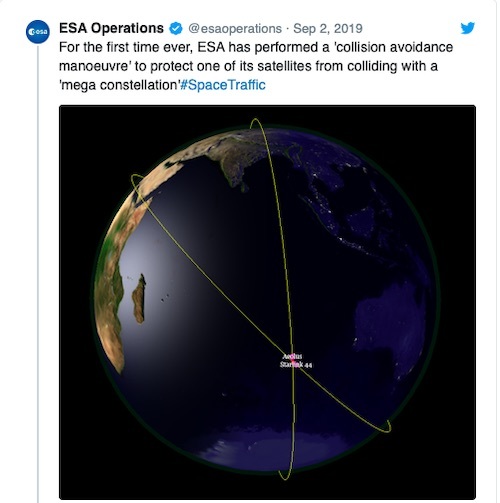 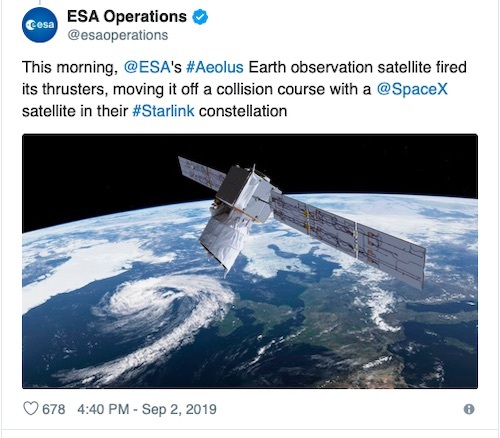 “Experts in our #SpaceDebris team calculated the risk of collision between these two active satellites, determining the safest option for #Aeolus would be to increase its altitude and pass over the @SpaceX satellite,” the agency stated in one tweet. That maneuver took place about half an orbit before closest approach, and the agency confirmed that the spacecraft was operating normally after the time of closest approach.

ESA provided few other details about the circumstances of the potential conjunction, including how close the two spacecraft were predicted to come to each other at the time of closest approach, the probability of a collision and what communications ESA had with SpaceX or others.

Holger Krag, director of ESA’s Space Safety Programme Office, said in a Sept. 3 email that the agency’s conjunction assessment team noticed the potential close approach about five days in advance, using data provided by the U.S. Air Force’s 18th Space Control Squadron. “We have informed SpaceX and they acknowledged,” he said. “Over the days the collision probability exceeded the decision threshold and we started the maneuver preparation and shared our plans with SpaceX. The decision to maneuver was then made the day before.”

SpaceX, in a statement Sept. 3, said it was aware of a potential conjunction Aug. 28 and communicated with ESA. At that time, though, the threat of a potential collision was only about 1 in 50,000, below the threshold where a maneuver was warranted. When refined data from the U.S. Air Force increased the probability to within 1 in 1,000, “a bug in our on-call paging system prevented the Starlink operator from seeing the follow on correspondence on this probability increase,” a company spokesperson told SpaceNews.

“SpaceX is still investigating the issue and will implement corrective actions,” the spokesperson said of the glitch. “However, had the Starlink operator seen the correspondence, we would have coordinated with ESA to determine best approach with their continuing with their maneuver or our performing a maneuver.”

According to a list of conjunctions called the Satellite Orbital Conjunction Reports Assessing Threatening Encounters in Space (SOCRATES), maintained by the Center for Space Standards & Innovation, Aeolus was predicted to have a close approach shortly after 7 a.m. Eastern Sept. 2 with a satellite identified as “Starlink AV” for its international designation, 2019-029AV. The two satellites were predicted to come within about four kilometers of each other, at a relative velocity of 14.4 kilometers per second. However, the SOCRATES data predicted a very low probability of collision — less than one in one million — which ordinarily would be far below the threshold for an avoidance maneuver.

Krag, though, said that while SOCRATES uses publicly available information on spacecraft orbits, known as two-line elements (TLEs), satellite operators like ESA and SpaceX have access to more accurate orbital information provided by the Air Force “about one order of magnitude better than TLEs.” That, combined with operators’ own knowledge of spacecraft positions, yielded a “more credible” collision probability of 1 in 1,000 that led to the decision to perform the maneuver.

Most of the other Starlink satellites, launched into orbits about 450 kilometers high, have since moved into their operational altitudes of about 550 kilometers. SpaceX announced in June that it planned to intentionally deorbit two of the Starlink satellites as test of the spacecraft’s propulsion system, suggesting Starlink AV may be one of those satellites. A source, speaking on background, confirmed that Starlink AV is one of the two spacecraft being deliberately deorbited, and that the spacecraft would have been able to perform an avoidance maneuver if needed.

Krag said this was the first collision avoidance maneuver for Aeolus since its launch a little more than one year ago. Conjunctions are rare at that low altitude, he noted, and in general most conjunctions are with debris, which constitute about 90 percent of the objects currently tracked in orbit. “So a conjunction with an operated spacecraft is quite rare, in particular in this altitude,” he said.

ESA, in its series of tweets about the maneuver, suggested that the “manual” approach to avoiding the potential collision will not be sustainable once more satellites, like those in Starlink and other planned megaconstellations, are in orbit. “These avoidance maneuvers take a lot of time to prepare – from determining the future orbital positions of all functioning spacecraft, to calculating the risk of collision and potential outcomes of different actions,” the agency said.

ESA said it’s looking to rely more on artificial intelligence to decide whether, and how, to perform avoidance maneuvers in the future, and has a proposal to fund such work for the agency’s member states to consider at the Space19+ ministerial meeting in November. That is part of a broader “Space Safety” initiative that also includes improved forecasting of space weather and a planetary defense mission called Hera.

“The case just showed that, in the absence of traffic rules and communication protocols, collision avoidance has to rely on the pragmatism of the involved operators,” Krag said. “This is done today by exchange of emails. Such a process is not viable any longer with the increase of space traffic.” He said that, if the Space Safety initiative is funded, ESA would like to demonstrate automated maneuver coordination by 2023.

SpaceX has also said it plans to use autonomous systems to avoid collisions. “Our satellites automatically maneuver around any orbital debris,” SpaceX Chief Executive Elon Musk said in a call with reporters in May, shortly before the first Starlink launch. Musk said SpaceX would upload tracking data from the Air Force to the satellites, “and they use their thrusters to maneuver automatically around anything that NORAD is tracking.”

While ESA sounded worried about the close approach, others in the industry were nonplussed by the attention it received. “Hmmm. We move our satellites on average once a week and don’t put out a press release to say who we maneuvered around,” tweeted Matt Desch, chief executive of Iridium, which operates a constellation of 75 next-generation satellites in low Earth orbit.

Desch, though, has previously expressed concerns about threats to space sustainability caused from megaconstellations, particularly if those satellites have high failure rates. “We are creating an environment that may make LEO an environment that isn’t sustainable,” he warned at a June forum organized by the Secure World Foundation.

He added then, though, that he was happy that SpaceX decided to place its Starlink satellites in a lower orbit than originally proposed, which means they will stay in orbit for a shorter period even if not deliberately deorbited. “It’s a very responsible decision,” he said. 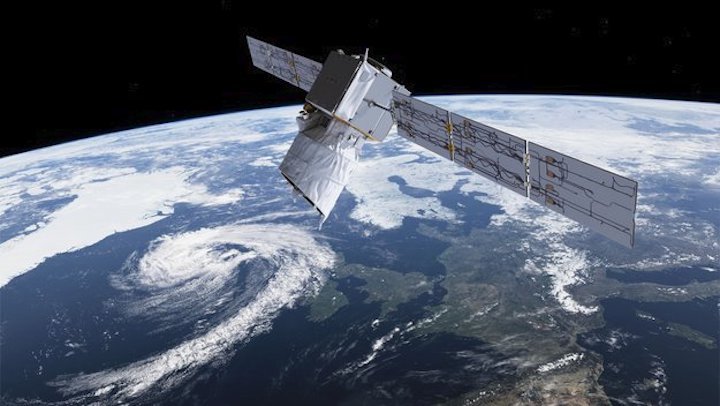 Data is constantly being issued by the 18th Space Control Squadron of the US Air Force, who monitor objects orbiting in Earth’s skies, providing information to operators about any potential close approach.

With this data, ESA and others are able to calculate the probability of collision between their spacecraft and all other artificial objects in orbit.

About a week ago, the US data suggested a potential ‘conjunction’ at 11:02 UTC on Monday, 2 September, between ESA’s Aeolus satellite and Starlink44 – one of the first 60 satellites recently launched in SpaceX’s mega constellation, planned to be a 12 000 strong fleet by mid-2020. Predicted conjunction between Aeolus and Starlink 44 As days passed, the probability of collision continued to increase, and by Wednesday 28 August the team decided to reach out to Starlink to discuss their options. Within a day, the Starlink team informed ESA that they had no plan to take action at this point.

ESA’s threshold for conducting an avoidance manoeuvre is a collision probability of more than 1 in 10 000, which was reached for the first time on Thursday evening.

An avoidance manoeuvre was prepared which would increase Aeolus’ altitude by 350 m, ensuring it would comfortably pass over the other satellite, and the team continued to monitor the situation.

On Sunday, as the probability continued to increase, the final decision was made to implement the manoeuvre, and the commands were sent to the spacecraft from ESA’s mission control centre in Germany. At this moment, chances of collision were around 1 in 1000, 10 times higher than the threshold.

On Monday morning, the commands triggered a series of thruster burns at 10:14, 10:17 and 10:18 UTC, half an orbit before the potential collision.

About half an hour after the conjunction was predicted, Aeolus contacted home as expected. This was the first reassurance that the manoeuvre was correctly executed and the satellite was OK.

Since then, teams on the ground have continued to receive scientific data from the spacecraft, meaning operations are back to normal science-gathering mode.

Contact with Starlink early in the process allowed ESA to take conflict-free action later, knowing the second spacecraft would remain where models expected it to be. Since the first satellite launch in 1957, more than 5500 launches have lifted over 9000 satellites into space. Of these, only about 2000 are currently functioning, which explains why 90% of ESA’s avoidance manoeuvres are the result of derelict and uncontrollable ‘space debris’.

In the years to come, constellations of thousands of satellites are set to change the space environment, vastly increasing the number of active, operational spacecraft in orbit.

This new technology brings enormous benefits to people on Earth, including global internet access and precise location services, but constellations also bring with them challenges in creating a safe and sustainable space environment.

“No one was at fault here, but this example does show the urgent need for proper space traffic management, with clear communication protocols and more automation,” explains Holger.

“This is how air traffic control has worked for many decades, and now space operators need to get together to define automated manoeuvre coordination.”

As the number of satellites in orbit rapidly increases, today's 'manual' collision avoidance process will become impossible, and automated systems are becoming necessary to protect our space infrastructure.

Collision avoidance manoeuvres take a lot of time to prepare – from determining the future orbital positions of functioning spacecraft, to calculating the risk of collision and the many possible outcomes of different actions. ESA is preparing to automate this process using artificial intelligence, speeding up the processes of data crunching and risk analysis, from the initial warning of a potential conjunction to the satellite finally moving out of the way.

Such use of space-based communication links can save precious time when sending manoeuvre commands at the last minute.

Under its Space Safety activities, ESA plans to invest in technologies required to automatically process collision warnings, coordinate manoeuvres with other operators and send the commands to spacecraft entirely automatically, ensuring the benefits of space can continue to be enjoyed for generations to come.