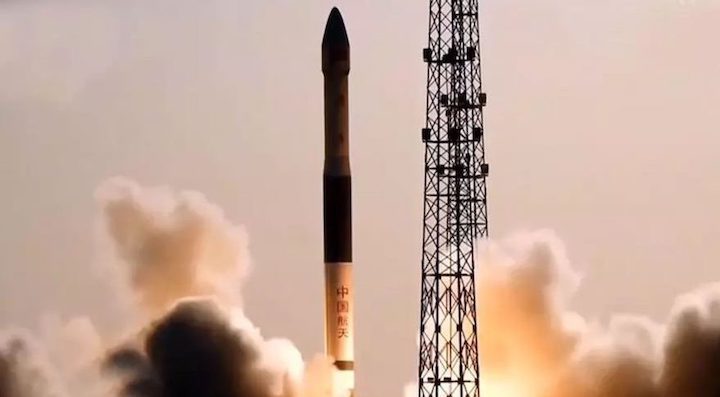 The Kuaizhou-1A launched from a mobile platform at the Jiuquan Satellite Launch Center in northwest China at 7:41 p.m. Eastern, successfully carrying to a microgravity experiment satellite and a commercial technology verification satellite into roughly 600-kilometer altitude orbits inclined by 97.8 degrees.

It was China’s 16th orbital launch of 2019 and the first since the Aug. 19 launch of communications satellite ChinaSat-18, which separated successfully from the launch vehicle but remains in geosynchronous transfer orbit after experiencing ‘abnormalities’.

The Kuaizhou-1A, understood to be derived from missile technology, consists of three solid stages and a liquid propellant upper stage, and is capable of lofting a 200-kilogram payload into a 700-kilometer sun-synchronous orbit (SSO).

The launch vehicle belongs to Expace, a commercial subsidiary of the China Aerospace Science and Industry Corporation (CASIC), a giant defense contractor and missile maker.

Friday was the third launch of the Kuaizhou-1A and follows a spate of Chinese light launch vehicle missions in recent months as the country to develop innovative and low-cost access to space through opening the sector to private capital and a civilian-military fusion national strategy.

The first successful orbital launch by a Chinese private company, iSpace, was carried out in July. This was preceded by attempts by OneSpace in March and Landspace in October last year. Linkspace, another private company launch company, performed a 300-meter hop test with a technology verification rocket Aug. 12.

Expace meanwhile was planning to carry out the first launch of the larger Kuaizhou-11, which may lift as much as 1,000 kilograms to 700-kilometer SSO, before the end of 2018. The new launcher has still not reached the pad.

The main payload for the Friday launch was KX-09, a microgravity experiment for the Chinese Academy of Sciences as part of a pilot phase of a space science strategy. The experiment will pave the way for future fundamental science research, according to CAS.

KX-09 was developed by DFH Satellite Co., a subsidiary of the China Academy of Space Technology (CAST), which designs and manufacturers spacecraft under the aegis of CASC,

Also aboard was Xiaoxiang-1 (07) for commercial satellite firm Spacety. XX-1 (07) is a 6U cubesat which will test spaceborne air traffic control technology during a design lifetime of three years, according to the company.

Xiaoxiang-1 (07) is designated as the eighth mission for Changsha-based Spacety. It is one of the earliest Chinese private satellite companies, having been established in January 2016 following late 2014 government policy shifts opening up the small satellite and launch sectors.