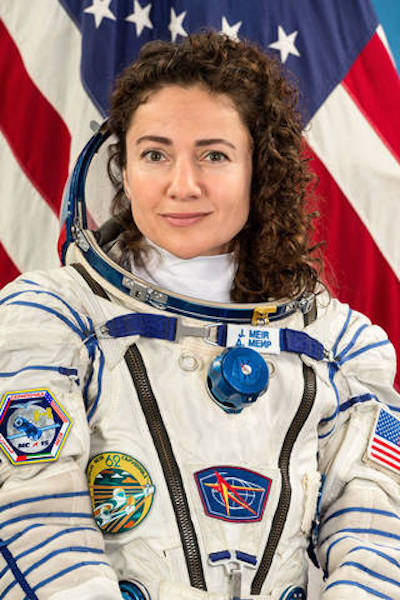 NASA astronaut Jessica Meir will be available from 7 to 8:15 a.m. EDT Wednesday, Sept. 4, for her final live satellite interviews before launching on a six-month mission aboard the International Space Station.

The interviews, originating from Star City, Russia, will air live on NASA Television and the agency’s website, preceded at 6:30 a.m. by video of Meir’s training.

To interview Meir, media must contact Sarah Volkman no later than 5 p.m. Friday, Aug. 30, at 281-483-9071 or sarah.e.volkman@nasa.gov. Media participating in the interviews must tune to the NASA TV Media Channel (NTV-3). Satellite tuning information is available at:

Meir and her crewmates, Oleg Skripochka of the Russian space agency Roscosmos and Roscosmos spaceflight participant Hazzaa Ali Almansoori of the United Arab Emirates’ Mohammed Bin Rashid Space Centre, are scheduled to launch Sept. 25 aboard the Soyuz MS-15 spacecraft from the Baikonur Cosmodrome in Kazakhstan.

They will arrive at the space station about six hours after launch and join six other crew members currently aboard the orbital outpost: NASA astronauts Nick Hague, Christina Koch and Andrew Morgan; ESA (European Space Agency) astronaut Luca Parmitano; and Roscosmos cosmonauts Alexander Skvortsov and Alexey Ovchinin. Meir is scheduled to live and work on the space station until spring 2020.

During Expeditions 61 and 62, Meir and her crewmates will support about 250 research experiments not possible on Earth. These pursuits broaden our knowledge of Earth, space, physical and biological sciences in ways that benefit our everyday lives. They also will help enable long-duration exploration into deep space for future Artemis missions to the Moon and eventually on to Mars. Experiments the crew conduct in space also have practical applications on Earth.

This will be the first expedition into space for Meir, who grew up in Caribou, Maine, and was selected for astronaut training in 2013. She earned a bachelor’s degree in biology from Brown University, a master’s degree in space studies from the International Space University and a doctorate in marine biology from Scripps Institution of Oceanography in San Diego. Before becoming an astronaut, Meir studied the physiology of animals in extreme environments and participated in diving expeditions to the Antarctic and Belize. At the time of her selection as an astronaut, Meir was working as an assistant professor at Harvard Medical School/Massachusetts General Hospital.