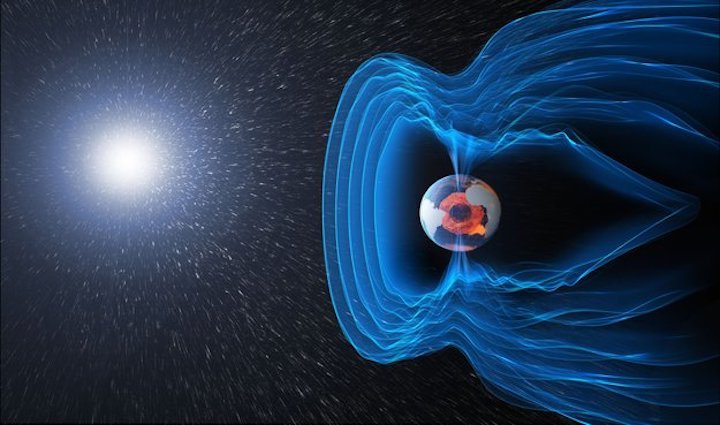 THE RADIATION SHOWSTOPPER FOR MARS EXPLORATION

An astronaut on a mission to Mars could receive radiation doses up to 700 times higher than on our planet – a major showstopper for the safe exploration of our Solar System. A team of European experts is working with ESA to protect the health of future crews on their way to the Moon and beyond.

Earth’s magnetic field and atmosphere protect us from the constant bombardment of galactic cosmic rays – energetic particles that travel at close to the speed of light and penetrate the human body.

Cosmic radiation could increase cancer risks during long duration missions. Damage to the human body extends to the brain, heart and the central nervous system and sets the stage for degenerative diseases. A higher percentage of early-onset cataracts have been reported in astronauts. 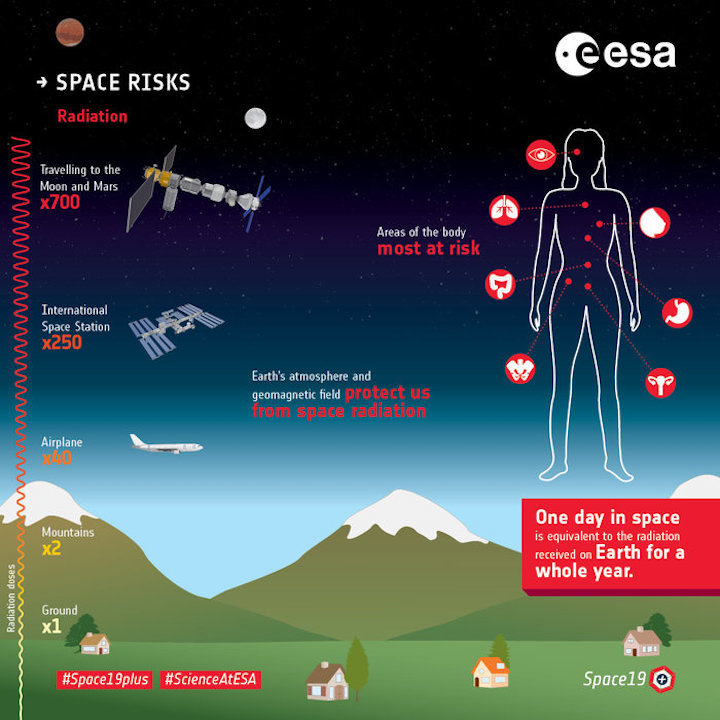 “One day in space is equivalent to the radiation received on Earth for a whole year,” explains physicist Marco Durante, who studies cosmic radiation on Earth.

Marco points out that most of the changes in the astronauts’ gene expression are believed to be a result of radiation exposure, according to the recent NASA’s Twins study. This research showed DNA damage in astronaut Scott Kelly compared to his identical twin and fellow astronaut Mark Kelly, who remained on Earth.

A second source of space radiation comes from unpredictable solar particle events that deliver high doses of radiation in a short period of time, leading to ‘radiation sickness’ unless protective measures are taken.

“The real problem is the large uncertainty surrounding the risks. We don’t understand space radiation very well and the long-lasting effects are unknown,” explains Marco who is also part of an ESA team formed to investigate radiation.

Since 2015, this forum of experts provides advice from areas such as space science, biology, epidemiology, medicine and physics to improve protection from space radiation. 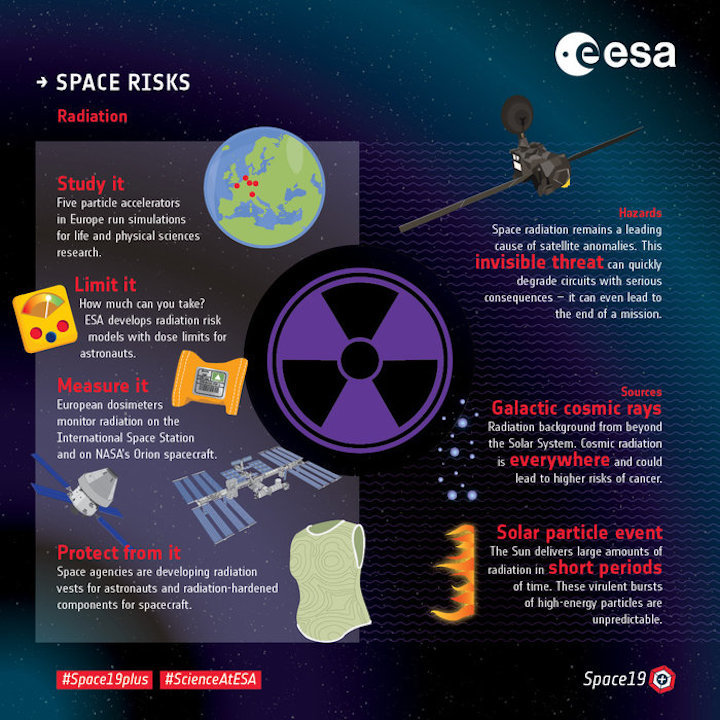 While astronauts are not considered radiation workers in all countries, they are exposed to 200 times more radiation on the International Space Station than an airline pilot or a radiology nurse.

Radiation is in the Space Station’s spotlight every day. A console at NASA’s mission control in Houston, Texas, is constantly showing space weather information.

If a burst of space radiation is detected, teams on Earth can abort a spacewalk, instruct astronauts to move to more shielded areas and even change the altitude of the Station to minimise impact.

One of the main recommendations of the topical team is to develop a risk model with the radiation dose limits for crews travelling beyond the International Space Station.

ESA’s flight surgeon and radiologist Ulrich Straube believes that the model should “provide information on the risks that could cause cancer and non-cancer health issues for astronauts going to the Moon and Mars in agreement with all space agencies.”

Recent data from ExoMars Trace Gas Orbiter showed that on a six-month journey to the Red Planet an astronaut could be exposed to at least 60% of the total radiation dose limit recommended for their entire career.

“As it stands today, we can’t go to Mars due to radiation. It would be impossible to meet acceptable dose limits,” reminds Marco. 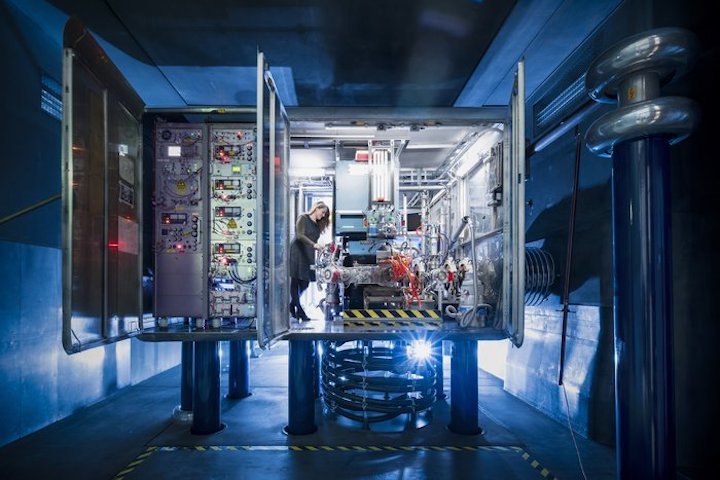 ESA has teamed up with five particle accelerators in Europe that can recreate cosmic radiation by ‘shooting’ atomic particles to speeds approaching the speed of light. Researchers have been bombarding biological cells and materials with radiation to understand how to best protect astronauts.

“The research is paying off. Lithium is standing out as a promising material for shielding in planetary missions,” says Marco.

ESA has been measuring the radiation dose on the International Space Station for seven years with passive radiation detectors in the DOSIS 3D experiment. ESA astronauts Andreas Mogensen and Thomas Pesquet wore a new mobile dosimeter during their missions that gave them a real-time snapshot of their exposure.

The same European team behind this research will provide radiation detectors to monitor the skin and organ doses of the two phantoms traveling to the Moon onboard NASA’s Orion spacecraft.

ESA has demonstrated expertise in studying Mars from orbit, now we are looking to secure a safe landing, to rove across the surface and to drill underground to search for evidence of life. Our orbiters are already in place to provide data relay services for surface missions. The next logical step is to bring samples back to Earth, to provide access to Mars for scientists globally, and to better prepare for future human exploration of the Red Planet. This week we’re highlighting ESA’s contribution to Mars exploration as we ramp up to the launch of our second ExoMars mission, and look beyond to completing a Mars Sample Return mission. Join the conversation online with the hashtag #ExploreFarther 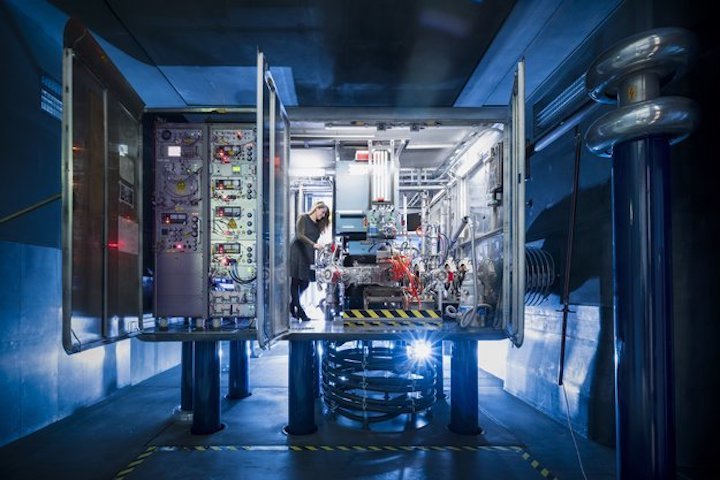 There is little known about the effects of space radiation on the human body. Astronauts cannot see or feel it, yet the high doses they are exposed to outside Earth’s cocoon pose health hazards for trips to the Moon and Mars. To help investigate and find out more, European scientists can now accelerate atoms at close to the speed of light to learn how to protect astronauts.

Space radiation passes through matter and penetrates the human body. Energetic particles impact living tissues, impairing normal function of cells and even killing them. An astronaut on a mission to Mars could receive radiation doses up to 700 times higher than on our planet.

This type of radiation is a major concern for space agencies –  the constant shelling of cosmic rays could damage crews and jeopardise a mission. “The radiation risk is characterised by high uncertainty and lack of countermeasures. We need to know more,” says Jennifer Ngo-Anh, ESA’s team leader for human research, biology and physical sciences.

Radiation damage to the human body extends to the brain, heart and the central nervous system.

ESA is opening the doors to research into the biological effects of space radiation. Experiments should investigate radiation doses that astronauts could cope with while staying safe from cancer or other degenerative diseases during and after a mission.

Scientists are encouraged to investigate radiation risks and how to stop them with the right countermeasures.

ESA is offering access to a high-energy accelerator to recreate cosmic radiation by ‘shooting’ atomic particles to speeds approaching the speed of light.

Experiments will take place at the GSI accelerator facility in Darmstadt, Germany, also known for the discovery of six chemical elements and the development of a new type of tumor therapy using ion beams. This facility has seen 36 experiments bombarding cells and materials with radiation to address the effects of space radiation. The accelerator will host a workshop in September for researchers interested in its potential.

The results from these studies are not solely space bound. “This research could contribute to better assess ionising radiation risks on Earth and improve charged particle therapy for oncology patients,” says Jennifer.