The detailed project report on setting up a space station will be submitted to the government after the Gaganyaan mission. 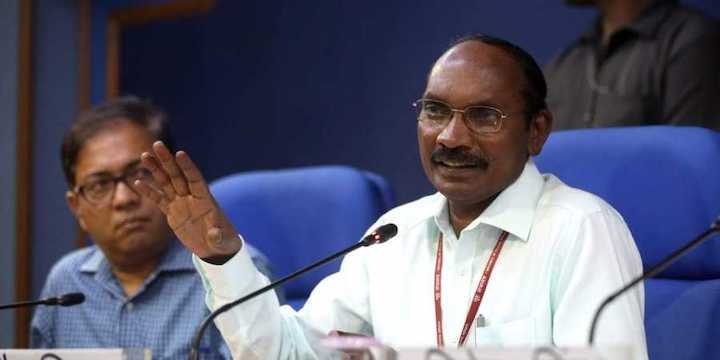 India plans to have its own space station, and modalities for it will be worked out after the first manned mission, Gaganyaan, scheduled for August 2022, K. Sivan, Chairman of the Indian Space Research Organisation (ISRO), said on Thursday.

“We want to have a separate space station. We will launch a small module for microgravity experiments... that is our ambition,” he said, addressing the media. A detailed report would be submitted to the government after the Gaganyaan mission.

Dr. Sivan said the proposed space station is envisaged to weigh 20 tonnes and serve as a facility where astronauts can stay for 15-20 days, and it would be placed in an orbit 400 km above earth. The time frame for launch is 5-7 years after Gaganyaan, he added.

The ISRO would also join the international space community for a manned mission to moon and beyond, Dr. Sivan said.

Speaking on the progress of Gaganyaan, Jitendra Singh, Minster of State in the Prime Minister’s Office, said the project was on track to be realised by the 75th Independence Day or even earlier.

“Cost approved by the Union Cabinet just before the Model Code of Conduct came into force was ₹10,000 crore,” Dr. Singh said.

A Gaganyaan National Advisory Council has been created with members from different institutions and industries to oversee and advise on the mission. Selection of 2-3 crew members for Gaganyaan would be done in six months, Dr. Singh said and added that they would then undergo training for 1-1.5 years after that.

The initial phase of training would be in India and the advanced stage would be done abroad as the requisite facilities did not exist here and the project was on a short timeline, Dr. Sivan said.

A GSLV Mk-III launch vehicle would be used to launch the Gaganyaan. Prior to that, two unmanned missions would be undertaken, one in December next year and the second, six months after that. The Gagayaan mission aims to send a 2-3 person crew to space for a period of seven days. The spacecraft would be placed in a low earth orbit of 300-400 km.

ISRO had already signed a Memorandum of Understanding (MoU) with the Indian Air Force for selection and training of pilots for the manned mission. Talks were underway with the Navy and Coast Guard for the recovery of the crew module once it lands in water after re-entry into the earth’s atmosphere, Dr. Sivan said.

After Chandrayaan-2, ISRO has set its sights on two interplanetary missions. Mission Aditya-L1 is scheduled for next year to study the Sun’s corona, which effects climate on earth, and another mission to study Venus in 2-3 years.

India plans giant leap in space, to have own station by 2030

ISRO also confirmed that their first human mission into space would be sent in 2022 with three crew members on board.

NEW DELHI: Giving wings to India’s ambitious plan to dominate space, the country will have its own space station by 2030. Announcing this and a clutch of other lofty projects here on Thursday, ISRO chairman K Sivan said that the proposed space station will be part of Isro’s long-drawn launch schedule that includes a mission to Venus, to be launched in the next two-three years.

Also on the cards are a manned mission to the Moon as well as setting up colonies on the Moon and Mars.“We are planning to have a separate space station. We will not be a part of the International Space Station. Our space station is going to be very small. We will be launching a small module and that will be used for carrying out microgravity experiments,” Sivan told reporters here on Thursday.

The proposed space station will weigh around 20 tonnes and be located in a low earth orbit of 400 km to conduct micro-gravity experiments. It is expected to accommodate astronauts for a short duration of 15-20 days in space.

A space station is a spacecraft capable of supporting crew members, designed to remain in space for an extended period of time and for other spacecraft to dock.After the Moon mission, ISRO will launch a mission to the Sun, Aditya-L1, in the first half of 2020, said Sivan, who is also the Secretary, Department of Space.

A space station is a spacecraft capable of supporting crew members, designed to remain in space for an extended period of time and for other spacecraft to dock.After the Moon mission, ISRO will launch a mission to the Sun, Aditya-L1, in the first half of 2020, said Sivan, who is also the Secretary, Department of Space. 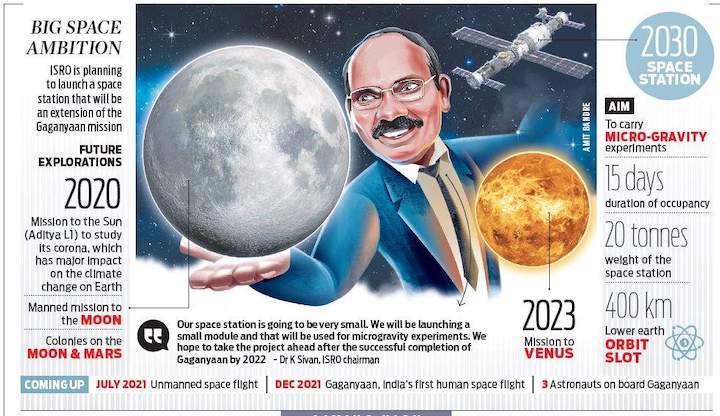 Raumfahrt - India to have its own space station: ISRO
1565 Views
Created with page4