It's Tic vs. Tac as the Media Goes Into a Frenzy 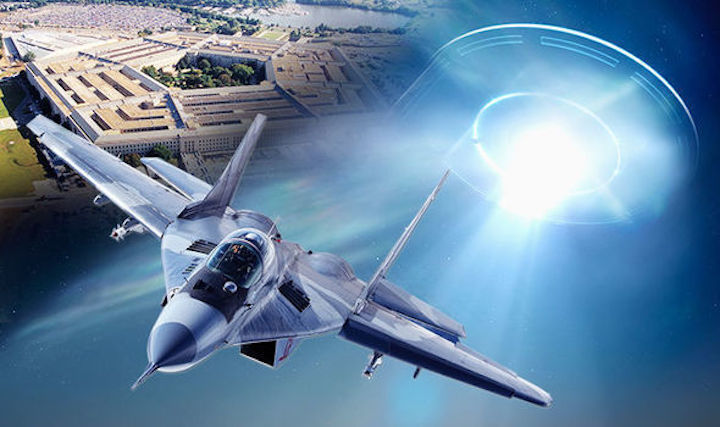 Back on December 16, 2017, the New York Times published a now-famous article on about the previously unknown Pentagon UFO study program, as reported by Tom DeLonge and his To The Stars Academy (TTSA), titled "Glowing Auras  and Black Money - The Pentagon's Mysterious U.F.O. Program." It set off a media UFO frenzy that still continues. To show how little TTSA's people understand about what they are doing, the so-called "glowing auras" surrounding the objects represent nothing more than a processing artifact of the infrared image, but TTSa's "experts," as well as those who look up to them, don't know that and think it's mysterious.
Most people didn't notice that Leslie Kean, one of the authors of this piece, is a dedicated UFO promoter who has written a popular UFO book. She is also very gullible, at one point promoting a video of a fly buzzing around as if it were some great proof of high-performance UFOs. (And she still has not admitted that she was fooled by a fly.) Another author, Ralph Blumenthal, has also been a UFO believer for years.
Now the other shoe has dropped. On May 26, the New York Times carried another article by Helene Cooper, Ralph Blumenthal and Leslie Kean - the same three authors as the earlier piece - headlined "Wow, what is that?' Navy Pilots Report Unexplained Flying Objects."

The strange objects, one of them like a spinning top moving against the wind, appeared almost daily from the summer of 2014 to March 2015, high in the skies over the East Coast. Navy pilots reported to their superiors that the objects had no visible engine or infrared exhaust plumes, but that they could reach 30,000 feet and hypersonic speeds.

“These things would be out there all day,” said Lt. Ryan Graves, an F/A-18 Super Hornet pilot who has been with the Navy for 10 years

One seriously wonders why, if unknown objects were supposedly seen "almost daily" for nearly a year, and hung around "all day," we don't have overwhelming video, photographic, and instrumental evidence of them, removing all doubt about their appearance and behavior? In reality, all we see are the same three blurry infrared videos promoted by Tom DeLonge's To The Stars Academy, over and over again. This makes no sense at all. Doesn't the Navy have any cameras? 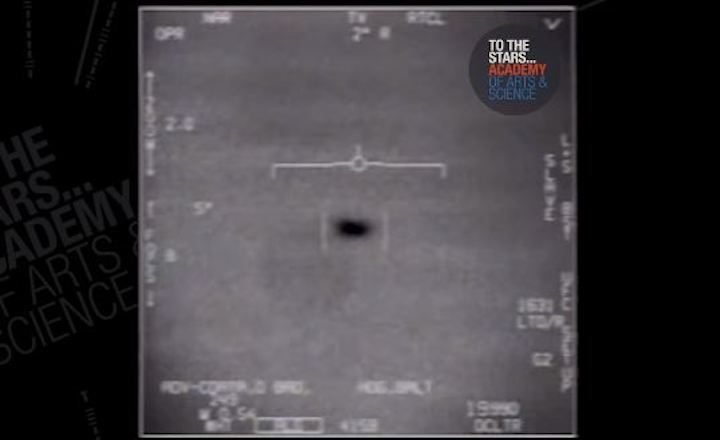 Not surprisingly, the New York Times story spurred an avalanche of me-too stories in the Washington Post (which proclaimed "UFOs exist and everyone needs to adjust to that fact"), Fox News, and many other media outlets.
It is purely coincidence, I'm sure, that this is occurring just a few days before the May 31 premiere of the TV series "Unidentified," produced by Tom DeLonge. 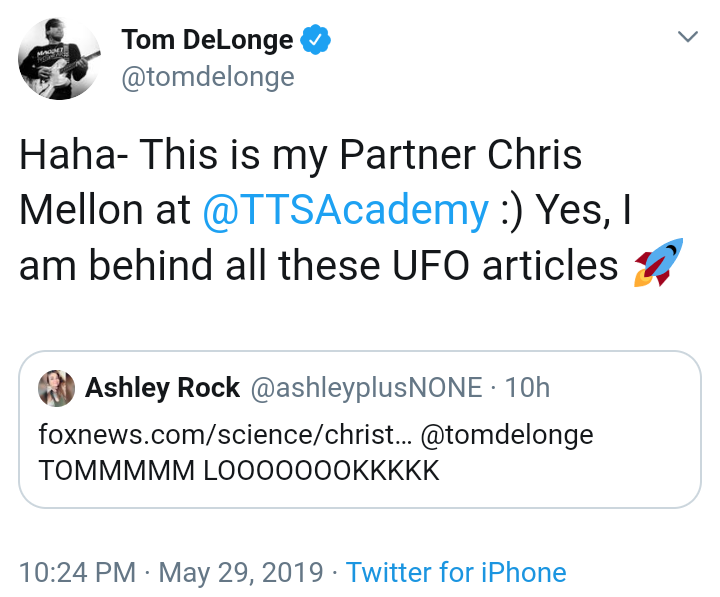 The NYT story is previewing and promoting material from TTSA's show "Unidentified," not making news of its own. The story is getting spread far and wide, but so far just other sites quoting from it, not verifying or reporting anything else.

Exactly - just the sort of story that lazy reporters love, because they don't need to do any investigation of their own. Collins notes that Blumenthal said in a recent interview,

We knew the History Channel had put this series together, and we watched that and give them credit in the piece, and saw what they said in the series and went after them (witnesses) because obviously we weren’t going to take it from the TV; we wanted to conduct our own interview...

Collins also notes that Blumenthal admits they are trying to maintain the illusion of being an independent effort from TTSA:

We really try to keep our distance from To The Stars because we think it helps our credibility to be separate...

But apparently, they are not. The New York Times' reporters are simply repeating Tom DeLonge's "spin," and other journalists in major publications are copying them. Skeptical blogger Jason Colavito explains how "New York Times' UFO Coverage Still Just a Front for To the Stars and History Channel."
People seem to forget that DeLonge describes TTSA as an “independent multi-media entertainment company.” Apparently it is becoming a very successful one indeed.
But underneath all the hype, there are still so many unanswered questions about TTSA's claims, the exact provenance of their videos, and so on. On April 29, reporter George Knapp wrote a story purporting to show that the Pentagon really did release the videos, based on a form provided by Luis Elizondo. But the indefatigable John Greenewald of the Black Vaulthas shown how that claim, when closely examined, falls apart.


we have no proof of any [official Pentagon] release, let alone what is being touted [the videos] is even the same evidence connected to this DD Form 1910. If we see a blatant disregard for the truth by Mr. Elizondo on display with this DD Form 1910, and we see the same disregard for the truth by To The Stars Academy as they have touted documents proving a public release – how can we believe everything or anything else from the same sources?

If TTSA expects to be taken seriously by anyone other than credulous reporters of the New York Times and the Washington Post, they will have to do better than this.
As for the so-called Tic Tac video of 2004, the best-known animal in TTSA's menagerie, serious fault lines are starting to appear in the differing accounts of various persons involved. David Fravor, the pilot who was vectored to the supposed location of the Tic Tac UFO but didn't see it, spoke at the recent UFO Fest in McMinnville, Oregon (held annually to honor the famous Trent UFO Photos, taken just outside that town). Reporter George Knapp and documentary filmmaker Jeremy Corbell were also on the panel. Fravor  sharply criticized the accounts of certain other people who were involved and have been speaking about the incident. He seemed to be singling out the account of the radar operator, Kevin Day, as being non-factual. He dismissed claims of Air Force personnel coming on board the Nimitz and confiscating evidence as being untrue. Fravor also  referred to Dave Beaty's "Nimitz UFO Encounters" documentary as a "cartoon."  This prompted Knapp to say to Fravor, "I guess you're being diplomatic, but some of the stories and claims that have been made by people, who may have been on those ships, are just bullshit." When people began commenting about these remarkable disagreements, Corbell pulled the video off YouTube.

We have seen this happen before with major UFO cases. What starts out as a tiny acorn of an unexplained sighting or incident gradually becomes a mighty oak tree of misinformation. That process is obviously well underway with the Tic Tac UFO incident.
Quelle: Bad UFOs: Skepticism, UFOs, and The Universe Robert Sheaffer
UFO-Forschung - Medien- und Ufologen Wahnsinn: "Wow, what is that?' Navy Pilots Report Unexplained Flying Objects."
1639 Views
Created with page4