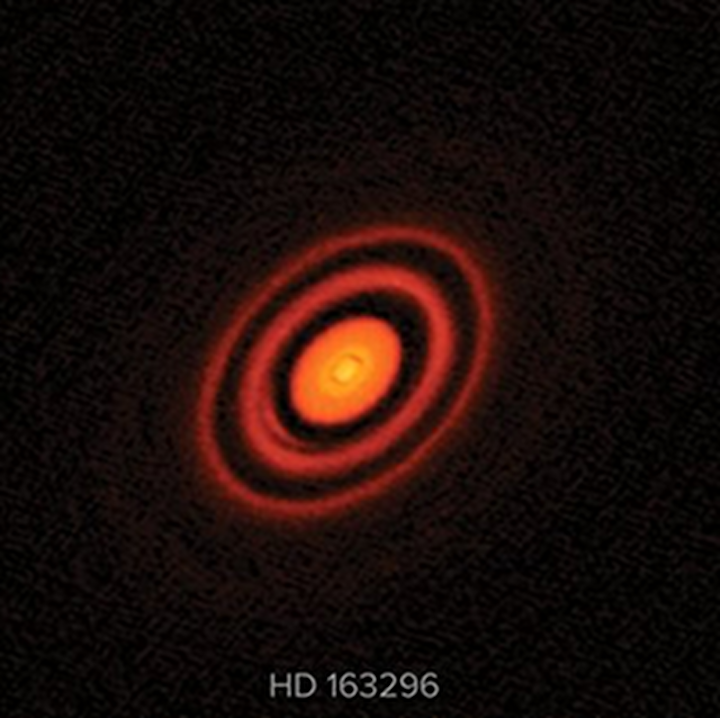 The circumstellar disk surrounding HD 163296 and the system of gaps and rings created by its young giant planets as recently imaged by ALMA (DSHARP Project). Credits: ALMA (ESO/NAOJ/NRAO), S. Dagnello

In a study appearing today on The Astrophysical Journal, an INAF-lead team of researchers explored whether the anomalous features in the dust and gas distributions of HD 163296's disk revealed by ALMA's observations could arise from the interaction of the giant planets with a component of the disk previously unaccounted for: the planetesimals

The circumstellar disks composed of gas and dust surrounding young forming stars are the environment in which planets are born. Their dust provides the building material from which planets begin their growth and, as a result of its incorporation into planetary bodies, its abundance is expected to decline over time. Since its first images of the bright concentric rings of the circumstellar disk around HL Tau, ALMA has been revolutionizing our view of circumstellar disks by revealing the widespread presence of a number of small-scale structures (gaps, rings and spiral arms) in their gas and dust, most of them believed to be linked to the presence of young planets and to arise from the interplay of their gravity with their surrounding environment.

Among the best-studied disks observed by ALMA is that surrounding HD 163296, a 5 Myr-old star about twice the mass of the Sun. HD 163296's disk is both massive (a bit less than one tenth of the Sun's mass) and wide (about 500 au, twice the outer boundary of the Kuiper Belt in the Solar System) and has been proposed to be home to at least three planets with masses comprised between twice that of Uranus and the one of Jupiter. ALMA's most recent observations allowed to spatially and compositionally characterize the structure of HD 163296's disk to a level previously undreamed of and showed how dust is still quite abundant (more than 300 times the mass of the Earth) in this disk notwithstanding its age and having produced at least three giant planets. The same observations also revealed some strange behaviors of the dust spatial distribution that could not easily be explained only as the result of its interplay with the gas and the newly formed giant planets.

Dust is expected to migrate inward from the outer regions of the disk due to its coupling and friction with the gas, but its also expected to be stopped in its migration by massive planets. As a result of this inward flow, dust should disappear over time from the region immediately inside HD 163296's innermost planet. At the same time, dust coming from the outer regions of the disk should pile up outside the orbits of the second and third planets. ALMA's observations revealed instead that the regions inside the first planet and between the first and second planets have some of the highest concentrations of dust of the whole disk. In a study appearing today on The Astrophysical Journal, a team of researchers explored whether these anomalous features could arise from the interaction of the giant planets with a component of the disk previously unaccounted for: the planetesimals.

"From the study of the Solar System we know that mature circumstellar disks like HD 163296 are not composed only by gas and dust, but also contain an invisible population of small planetary objects similar to our asteroids and comets" explains Diego Turrini, lead author of the study and researcher at the Institute for Space Astrophysics and Planetary Science (IAPS) of the Italian National Institute of Astrophysics (INAF). "We also know that the appearance of giant planets affects these planetesimals by causing in their orbital evolution a brief but intense spike of dynamical excitation that, while short from the point of view of the long life of a planetary system, can have a duration comparable to the life of circumstellar disks." continues Turrini. 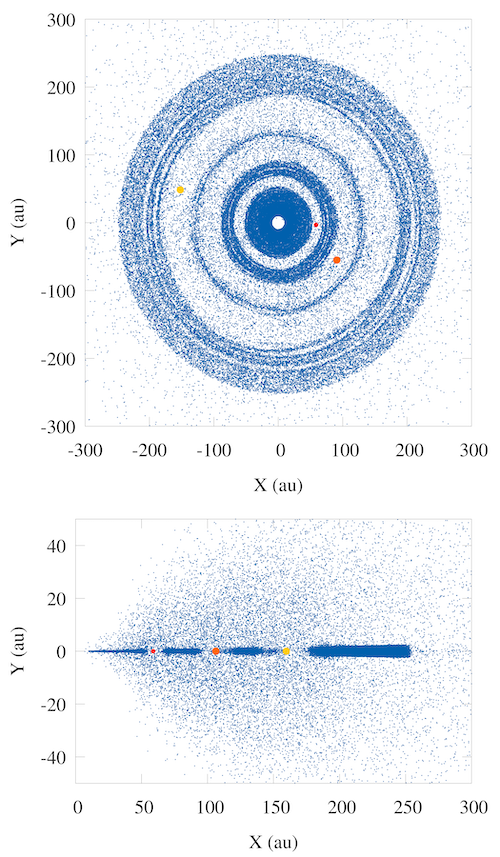 The disk of icy planetesimals hidden in HD 163296's circumstellar disk seen from above and the side. The young giant planets rapidly create a large population of exocomets acting as high-speed projectiles for the other bodies. Credits: D. Turrini (INAF-IAPS).

The team wondered whether these interactions between the HD 163296's young giant planets and the invisible planetesimals could produce the observed anomalies in the dust distribution. The simulations they performed showed how, during the growth of the three giant planets, a larger and larger fraction of the surrounding population of planetesimals is injected on very eccentric and very inclined orbits similar to those of the comets in the Solar System. "The main outcome of this dynamical excitation is a higher rate of violent collisions among the planetesimals." explains Francesco Marzari, professor at the University of Padova and co-author of the study.

When they analyzed the outcome of the dynamical simulations though a collisional model, the team found that the collisions among planetesimals remain quite gentle until the giant planets approach their final masses but then they rapidly grow a hundredfold in violence and start grinding down the planetesimals. "These violent collisions replenish the dust population in the disk." continues Marzari "The new dust produced by this process, however, has a different orbital distribution than the original one and mainly concentrate in two places: the orbital region within the first giant planet and the ring between the first and the second giant planets." The same two regions where ALMA's observations revealed the largest discrepancies with what was theoretically expected.

The team found that the dynamical excitation caused by the appearance of the three giant planets should still be acting to date on the planetesimals embedded in HD 163296's disk. The authors also found that the resulting sustained collisional production of dust is capable of injecting tens of Earth masses of dust in those two orbital regions, explaining ALMA's observations also from a quantitative point of view. "Up to now studying this kind of process while occurring in circumstellar disks was possible only through simulations." comments Turrini "Thanks to ALMA we might now be able to study it as it happens and learn a lot on the interplay between planetary formation and the surrounding environment."

"The fast rate at which ALMA is providing new and more detailed data on HD 163296 allowed us to expand our study beyond its original scope." explains Danai Polychroni, co-author of the study and at the time professor at the Universidad de Atacama and adjunct researcher at INAF-IAPS. "We noticed that many planetesimals are excited to supersonic velocities with respect to the surrounding gas of the disk and can create shocks waves that can heat both planetesimals and gas. While we could not yet model this process in detail, recent observations reported the unexpected presence of CO gas in regions characterized by temperatures where it should be frozen solid and of possible anomalies in the thermal structure of the disk. Both findings can in principle be explained thanks to the presence of these supersonic planetesimals and the shock waves they create."

"This study was started as a pathfinder project to explore whether the dynamical excitation caused by newly formed giant planets could actually produce observable effects. As such, we just scratched the surface of this process and its implications." continues Leonardo Testi, also co-author of the study and head of the ALMA Support Center of the European Southern Observatory and INAF researcher on leave. "Nevertheless, its physical recipe is quite simple: massive planets forming in a disk of planetesimals. Given the widespread signatures of possible young giant planets we are discovering with ALMA and the extended duration of the dynamical effects caused by their appearance, we might be looking to a process that is quite common among circumstellar disks."

“The context of the work led by Diego Turrini is one of the pillars of the GENESIS synergy” explains Claudio Codella (INAF-Osservatorio Astrofisico di Arcetri), Principal Investigator of the GENESIS-SKA project, funded by INAF. “GENESIS-SKA (www.genesis.inaf.it) is a national project where more than 60 researchers of 8 INAF institutes works in a close collaboration with the overall goal to investigate the conditions favorable to the rise of planetary systems similar to our Solar System”. “The results of the present project”, adds Codella, “will be of extreme importance also for the study of the chemical compositions of the gas located in the regions where planets will form, and, possibly, of their atmospheres.”