In the most detailed analysis of how sands move around on Mars, a team of planetary scientists led by the UA found that processes not involved in controlling sand movement on Earth play major roles on Mars. 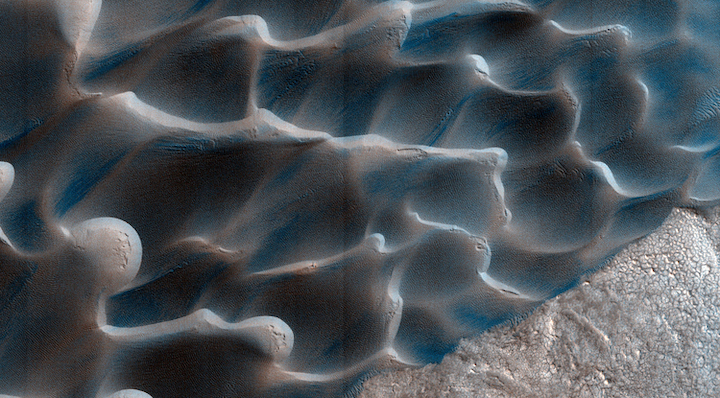 The retreat of Mars' polar cap of frozen carbon dioxide during the spring and summer generates winds that drive the largest movements of sand dunes observed on the red planet. (Image: NASA/JPL/University of Arizona/USGS)

Wind has shaped the face of Mars for millennia, but its exact role in piling up sand dunes, carving out rocky escarpments or filling impact craters has eluded scientists until now.

In the most detailed analysis of how sands move around on Mars, a team of planetary scientists led by Matthew Chojnacki at the University of Arizona Lunar and Planetary Lab set out to uncover the conditions that govern sand movement on Mars and how they differ from those on Earth.

The results, published in the current issue of the journal Geology, reveal that processes not involved in controlling sand movement on Earth play major roles on Mars, especially large-scale features on the landscape and differences in landform surface temperature.

"Because there are large sand dunes found in distinct regions of Mars, those are good places to look for changes," said Chojnacki, associate staff scientist at the UA and lead author of the paper, "Boundary conditions controls on the high-sand-flux regions of Mars." "If you don't have sand moving around, that means the surface is just sitting there, getting bombarded by ultraviolet and gamma radiation that would destroy complex molecules and any ancient Martian biosignatures."

Changes in a sand dune near the north polar ice cap over the course of one Mars year. (Image: NASA/JPL/University of Arizona)

Compared to Earth's atmosphere, the Martian atmosphere is so thin its average pressure on the surface is a mere 0.6 percent of our planet's air pressure at sea level. Consequently, sediments on the Martian surface move more slowly than their Earthly counterparts.

The Martian dunes observed in this study ranged from 6 to 400 feet tall and were found to creep along at a fairly uniform average speed of two feet per Earth year. For comparison, some of the faster terrestrial sand dunes on Earth, such as those in North Africa, migrate at 100 feet per year.

"On Mars, there simply is not enough wind energy to move a substantial amount of material around on the surface," Chojnacki said. "It might take two years on Mars to see the same movement you'd typically see in a season on Earth."

Planetary geologists had been debating whether the sand dunes on the red planet were relics from a distant past, when the atmosphere was much thicker, or whether drifting sands still reshape the planet's face today, and if so, to what degree.

"We wanted to know: Is the movement of sand uniform across the planet, or is it enhanced in some regions over others?" Chojnacki said. "We measured the rate and volume at which dunes are moving on Mars."

The team used images taken by the HiRISE camera aboard NASA's Mars Reconnaissance Orbiter, which has been surveying Earth's next-door neighbor since 2006. HiRISE, which stands for High Resolution Imaging Science Experiment, is led by the UA's Lunar and Planetary Laboratory and has captured about three percent of the Martian surface in stunning detail.

"This work could not have been done without HiRISE," said Chojnacki, who is a member of the HiRISE team. "The data did not come just from the images, but was derived through our photogrammetry lab that I co-manage with Sarah Sutton. We have a small army of undergraduate students who work part time and build these digital terrain models that provide fine-scale topography."

In the study's most surprising finding, the researchers discovered that the largest movements of sand in terms of volume and speed are restricted to three distinct regions: Syrtis Major, a dark spot larger than Arizona that sits directly west of the vast Isidis basin; Hellespontus Montes, a mountain range about two-thirds the length of the Cascades; and North Polar Erg, a sea of sand lapping around the north polar ice cap. All three areas are set apart from other parts of Mars by conditions not known to affect terrestrial dunes: stark transitions in topography and surface temperatures.

"Those are not factors you would find in terrestrial geology," Chojnacki said. "On Earth, the factors at work are different from Mars. For example, ground water near the surface or plants growing in the area retard dune sand movement." 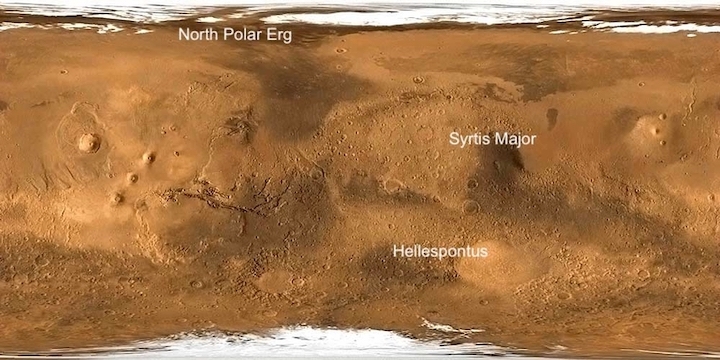 In the study, the regions with the largest rates of dune movement were found to be at the boundary of Isidis Basin and Syrtis Major, the Hellespontus mountain range and surrounding the North polar ice cap. (Image: NASA/JPL/Malin Space Science Systems)

On a smaller scale, basins filled with bright dust were found to have higher rates of sand movement, as well.

"A bright basin reflects the sunlight and heats up the air above much more quickly than the surrounding areas, where the ground is dark," Chojnacki said, "so the air will move up the basin toward the basin rim, driving the wind, and with it, the sand."

Understanding how sand and sediment move on Mars may help scientists plan future missions to regions that cannot easily be monitored and has implications for studying ancient, potentially habitable environments.

Funded by NASA and HiRISE, the study is co-authored by Maria Banks at NASA's Goddard Space Flight Center in Greenbelt, Maryland, Lori Fenton at the Carl Sagan Center at the SETI institute in Mountain View, California, and Anna Urso at LPL.

Mars-Chroniken - On Mars, Sands Shift to a Different Drum
1383 Views
Created with page4