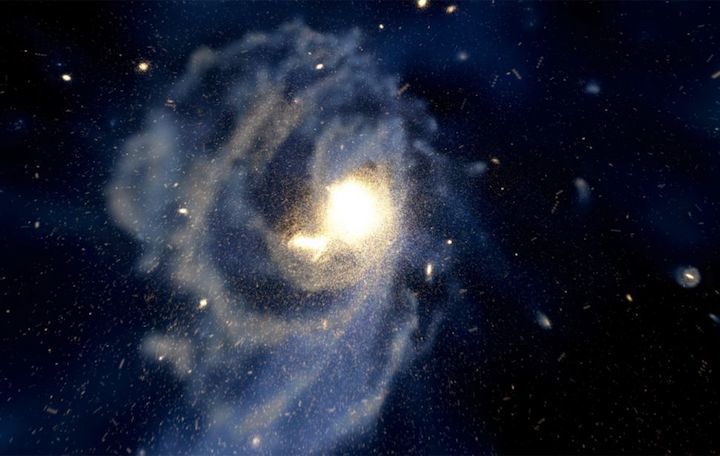 In a computer simulation of spiral galaxy formation, a halo structure partially forms from a pileup of many small galaxies. Even after merged galaxies disintegrate, individual stars retain chemical traces from their original galaxies.

A star in the Big Dipper is an intergalactic alien, according to clues in its chemical fingerprints.

The star's unusual chemistry is unlike that of all known stars in the Milky Way and instead has more in common with stars in nearby dwarf galaxies, new research reveals.

Researchers suspected that the stellar oddball, named J1124+4535, originated in a dwarf galaxy that collided with the Milky Way long ago. According to that theory, when the dwarf galaxy fell apart, it stranded this star in our cosmic neighborhood.

The star was first discovered in the constellation Ursa Major in 2015, by the Large Sky Area Multi-Object Fiber Spectroscopic Telescope (LAMOST) in China. Higher-resolution images were captured in 2017 by the Subaru Telescope in Japan, the scientists reported April 29 in the journal Nature Astronomy.

Spectrum readings from the star revealed that it was low in metals such as magnesium but had unexpectedly high levels of the heavy element europium; an element ratio that was unique in comparison to other Milky Way stars, the researchers wrote.

Elements in stars reflect the composition of the dust and gas clouds where the star formed. Stars that are close neighbors are usually shaped by the same materials and therefore have similar chemical signatures. When a star stands out from a group, scientists look elsewhere to see where it might have been born.

Prior studies have found that the Milky Way formed by colliding with and absorbing smaller galaxies. Metal-poor stars such as J1124+4535 are common in dwarf galaxies orbiting the Milky Way today, the scientists reported.

Their analysis of J1124+4535 provides "the clearest chemical signature" yet of the ancient galaxy mergers that shaped the Milky Way billions of years ago, according to the study.

And that's not the only cosmic evidence that hints at the Milky Way's turbulent past.

A distinctive bulge at the Milky Way's center is thought to be the result of a collision with a sausage-shaped dwarf galaxy about 10 billion years ago. That event inflated the Milky Way's core with an influx of billions of stars, some of which are among the oldest in the universe.

There may be an even bigger smashup in the Milky Way's future: Our galaxy is currently on a collision course with another spiral galaxy, the Large Magellanic Cloud. Luckily, that won't take place for at least another 2 billion years — and that collision is about 2 to 3 billion years before we're predicted to slam into the Andromeda Galaxy.