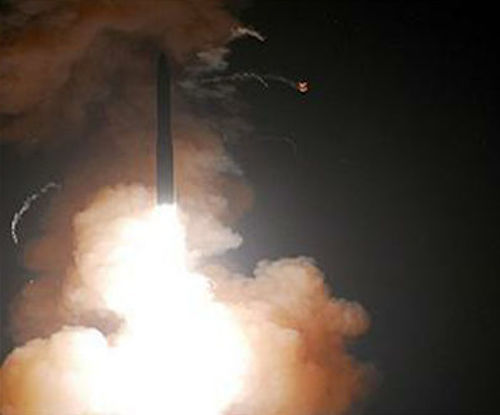 The U.S. Air Force launched a Minuteman III intercontinental ballistic missile in a test from Vandenberg Air Force Base in California.

The unnarmed rocket took off at 2:42 a.m. Wednesday, KEYT-TV in Central California reported. It was equipped with a test re-entry vehicle.

The missile traveled approximately 4,200 miles to the Kwajalein Atoll in the Marshall Islands.

The test was designed to verify the accuracy and reliability of the ICBM weapon system in an effort "to ensure a continued safe, secure and effective nuclear deterrent," according to an Air Force news release.

"The test launch is the culmination of months of hard work and preparation that involve multiple partners," said Col. Dave Kelley, 576th Flight Test Squadron commander at Vandenberg. "The men and women from the 90th MW, 576th FLTS, and the 30th Space Wing here at Vandenberg made this look easy, but it was far from that. It's a testament to the dedication and professionalism of these great organizations."

The 90th missile wing was selected for this task force based on its "demonstrated commitment, dedication to the mission and proficiency in maintaining and operating the nation's ICBM force," said Maj. Travis Hilliard, Task Force commander.

During a test in August at Vandenberg, the ICBM experienced an "anomaly" and was destroyed. The launch at first "was perfect" but then an anomaly created an "unsafe flight condition" and the crew decided to destroy the rocket before it reached its destination, U.S. Strategic Command boss Gen. John Hyten said at the STRATCOM Deterrance Symposium in Omaha, Neb.

Boeing has been developing Minuteman missile systems since 1958.

The Minuteman III deployment began in 1970 with an expected lifespan of 10 years. But in 1993, Boeing began to redesign the Minuteman III guidance electronics to extend the service life of the missile beyond 2020. The first successful test with the upgraded guidance system from Vandenberg was in 1998.