Is Jeff Bezos planning to send a lander to the moon’s south pole?

It’s possible to leap to that conclusion, based on an enigmatic tweet from Blue Origin, the Amazon CEO’s private space venture. 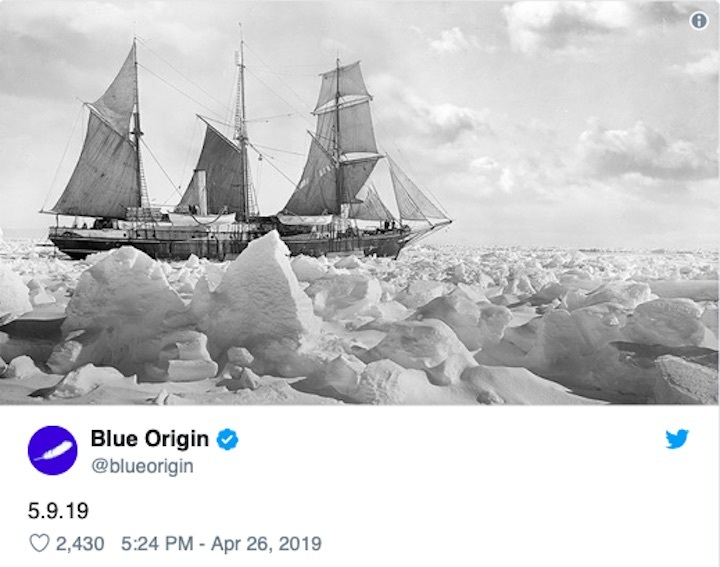 It so happens that Bezos is due to provide an update on Blue Origin on May 9 — in Washington, D.C., where the Satellite 2019 conference is being held that week.

Bezos has frequently talked about the craters in the moon’s polar regions as the preferred places for lunar exploration and settlement.

“We know that there’s water there. There’s ice there. There are probably other interesting things in those craters as well,” he told me last May at a space conference in Los Angeles.

“And then we also know that on the rims of the craters at the poles of the moon, there are places where you have almost perpetual sunlight,” he added. “Literally there are some peaks where you only have about 10 hours of darkness per year, and those perpetual peaks of light are conveniently located right next to the perpetual dark areas where all these interesting volatiles reside. So it’s almost like somebody set this up for us.”

To go there, Blue Origin is developing a lander called Blue Moon that would be capable of delivering up to 5 tons of cargo to the lunar surface. Blue Origin executives have said the lander could be ready to go as soon as 2023, which fits in well with NASA’s intention to put astronauts on the moon by 2024.

What’s the connection to Shackleton’s ship? One of the potential targets in the moon’s south polar region is Shackleton Crater.

All this doesn’t necessarily mean that Bezos will announce a mission to Shackleton Crater on May 9. But the teaser tweet does suggest that Blue Origin is planning a mission to one of the billionaire’s favorite off-Earth frontiers, the polar regions of the moon. There’s enough there for some entertaining speculation from Notre Dame planetary geologist and engineer Clive Neal; Skycorp CEO Dennis Wingo, author of the book “Moonrush”; Space News’ Jeff Foust and other space-watchers:

The Shackleton saga is inspiring, but it’s also a cautionary tale: The Imperial Trans-Antarctic Expedition literally ground to a halt in 1915 when Endurance got stuck in the ice of the Weddell Sea. After months adrift, the ship was crushed by the grinding ice and disintegrated, stranding Shackleton and his 27 crewmates. A small party led by Shackleton journeyed hundreds of miles to arrange a rescue in 1916, more than two years after the Endurance set sail from England.

Fortunately, robotic lunar landers won’t face those kinds of perils — but there’s plenty that could go wrong. Just ask the Israel’s SpaceIL team, whose Beresheet lander crashed on the moon this month due to an errant command entered into the spacecraft’s computer.