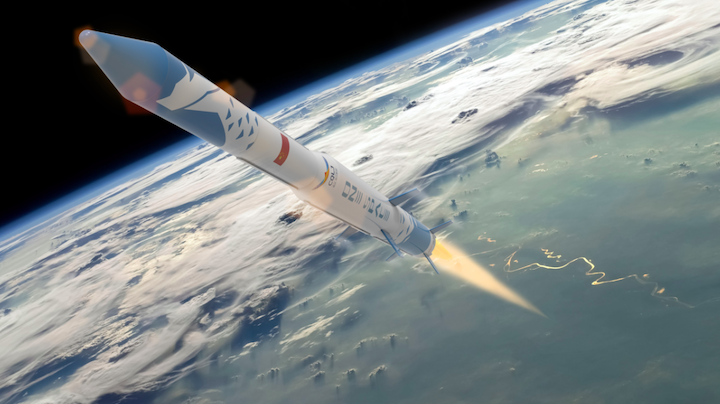 In 2014, China’s central government called for private capital to invest in commercial satellite operations. Since then, a slew of rocket startups have been established—yet so far, none have successfully launched their products into orbit. That could change next week.

OneSpace, a Beijing-based private space company, says it is launching a solid propellant rocket into orbit in late March (link in Chinese). It’s the second attempt from a private Chinese space company after another firm failed last year.

OneSpace’s rocket will carry a satellite from ZeroG Technology that it says weighs less than 100 kg (220 lbs). ZeroG, a Beijing-based small-satellite developer, said on a microblogging site that the launch would take place (link in Chinese) on March 25. OneSpace denied the launch date, but declined to share more exact timing with Quartz. ZeroG didn’t respond to queries about the mission.

OneSpace did say it is preparing for the launch at the Jiuquan Satellite Launch Center in the Gobi Desert in northern China. Their rocket, OS-M, is 19 meters tall, weighs 20 metric tons (22 tons), and consists of three solid propellant stages and a fourth liquid propellant stage.

Most Chinese rocket makers, like OneSpace, start with solid propellant designs typically developed for use in military ballistic missiles, which are less complex to manufacture, lowering up-front costs. These designs could be uncompetitive, however, if larger reusable rockets designed by SpaceX and Blue Origin continue to bring down the cost of launching satellites into the orbit, or if small liquid-fueled rockets prove to be more attractive to customers.

OneSpace declined to reveal the design, manufacture, and launch cost of OS-M, and only said its launch cost was lower than American space firms like Virgin Orbit and Rocket Lab.

Those companies, however, are building vehicles capable of launching larger satellites. Richard Branson-backed Virgin Orbit is developing LauncherOne, with a cost of $12 million to $15 million, to launch payloads of 300 kg to 500 kg (660 to 1,100 lbs). In November, Rocket Lab carried the first successful commercial launch with its Electron rocket sending six satellites into orbit; its next launch is planned for March 24. The Electron can carry payloads ranging from 150 to 225 kg (330 to 496 lbs) at a launch cost of $5 million to $6 million.

“Private Chinese launch companies are being extremely aggressive on price to try to win launches,” said Blaine Curcio, founder of Hong Kong-based satellite market research firm Orbital Gateway Consulting, in an interview with Quartz. Curcio said he has heard of a “free launch service” from a small satellite company. “If they are cheaper in the short term, it would be because Chinese venture capitalists or the launch companies themselves are more willing to lose money to win market share.”

The problem, however, remains whether there will be a commercial market big enough for the slew of launches. Curcio, the space analyst, said an estimated five Chinese firms have laid out plans to do around 120 to 150 launches by early 2020s, and he doubts there will be sufficient market demand for that.

Painted blue and white, OneSpace’s rocket has a dragon and mountains on it. The dragon represents Chinese culture, said the firm(link in Chinese), while mountains are geological features of the southwestern city Chongqing, where OneSpace just finished building a manufacturing facility.

OneSpace named the OS-M rocket “Chongqing Liangjiang Star” after the state-backed Chongqing Aviation Industry Investment group, which co-invested in the Chongqing manufacturing facility. In May 2018, it had used the same name on a smaller rocket, OS-X, which the firm claimed to be the first private suborbital launch in China.