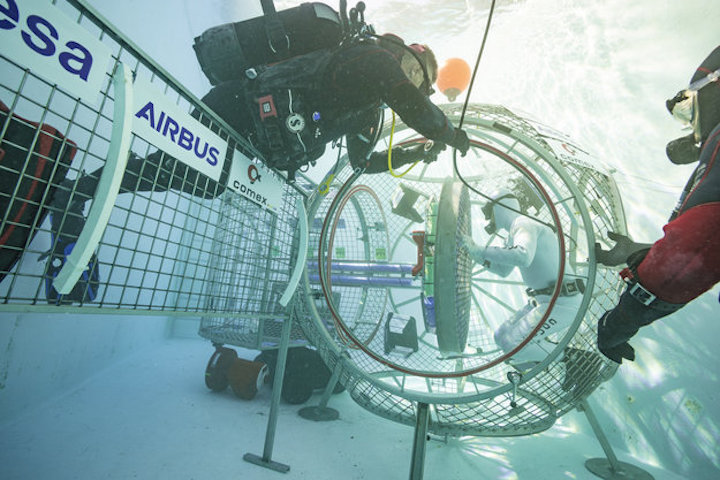 Underwater testing of an airlock design for the new Gateway station near the Moon.

FLOATING IDEAS FOR AN AIRLOCK NEAR THE MOON

Assembly of a new habitable structure near the Moon, known as the Gateway, is scheduled to begin in 2023. The international project will allow humans to explore farther than ever before and it brings new opportunities for European design in space.

In late 2018, ESA commissioned two consortia – one led by Airbus and the other by Thales Alenia Space – to undertake parallel studies into the design of a scientific airlock. Similarly to the Japanese Experiment Module Kibo on the International Space Station, this airlock will allow scientific experiments to be transferred from the Gateway to and from outer space. The scientific airlock forms one part of a European module called ESPRIT – a module that will also enable refuelling and provide telecommunications with the Moon and Earth.

Though it is still very early days for the ESPRIT development, ESA astronaut Jean-François Clervoy and ESA astronaut trainer Hervé Stevenin recently had the opportunity to get hands-on with one airlock concept in Marseille, France and see how this could work in space.

Designed and constructed by French company Comex for Airbus, the mockup of ESPRIT’s interior was tested underwater to simulate the weightlessness of space.

The team, led by Peter Weiss, used 3D-printed models to represent the hardware that will be operated by astronauts in the Gateway. These included parts of the robotic arm to be developed for the Gateway by the Canadian Space Agency. Comex diver Kathrin Nowack says the test’s main objectives were to evaluate requirements for payload operations and determine the best positioning for two cameras that will allow operations to be viewed from Earth.

“We wanted to see whether the astronauts had enough space to install hardware onto the payload table, perform any necessary checks and then move them through the airlock tunnel to be exposed to space,” she explains. “We also wanted to make sure the crew members had room to carry out maintenance or repair work inside the airlock and to identify where further crew interfaces – such as handrails – are required.”

To ensure a truly representative study, Jean-François and Hervé carried out the testing in neoprene suits while breathing through a long regulator hose connected to the surface.

ESA study manager Philippe Schoonejans says this was important to “mimic the environment of the Gateway in which astronauts will be floating around in regular clothing”.

Having spent 28 days in space over the course of three Shuttle missions, Philippe says Jean-François was well-suited to the testing. Hervé has also logged seven hours in weightlessness while training astronauts during parabolic flights. These experiences enabled the pair to evaluate both the accessibility and the ergonomics of the module.

“Through the testing, we were able to confirm that this preliminary inner design would be compatible with tasks astronauts are expected to perform in weightlessness and identify the best place to put handrails to ensure optimal stability of the crew as they carry out payload handling and airlock operations,” Hervé says.

Philippe says the team was also impressed with the sheer size of expected payloads and robotic interfaces.

“While we had seen the dimensions of these components in the documents, seeing full-scale 3D-printed models allowed us to better understand just how incredibly large they are,” Philippe says. “It’s something we will need to consider throughout the process in terms of balancing mass and strength.”

Forward to the Moon So, what exactly are the next steps? Philippe says for Airbus and Comex this was a confirmation and fact-finding mission. They will now use the test results to refine their concept and streamline their design.

Thales Alenia Space will also continue to work on their airlock concept and ESA intends to issue a competitive request for proposal in the summer. At this stage both companies will be asked to present their concepts and costings for consideration ahead of ESA’s next Ministerial Council in November.