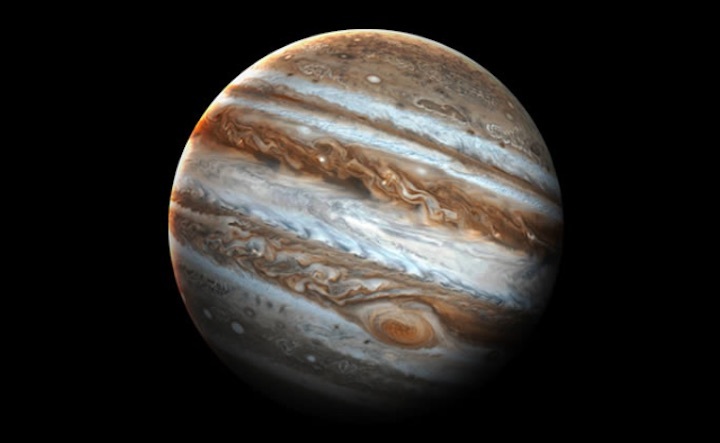 A regular pattern of unusual meteorological events at Jupiter’s equator has been identified by planetary scientists at the University of Leicester.

Using a large database of observations of Jupiter spanning more than four decades, scientists have been working to understand the forces shaping these gargantuan weather changes on the Solar System’s largest planet.

Lead author Dr Arrate Antuñano from the University of Leicester’s Department of Physics and Astronomy said: “Jupiter’s equator is normally completely clouded over, appearing dark in the infrared because those clouds appear in silhouette against Jupiter’s warm internal glow. Those thick clouds make the equator look white through a visible telescope.”

“Only by putting all of these observations together, from a wide variety of instruments over more than three Jupiter years – a year on Jupiter lasts 12 Earth years – did we begin to spot a pattern.”

Dr Antuñano said: “Every six or seven years, we found examples of observations when the equatorial clouds had vanished completely, allowing us to see deeper into Jupiter’s churning atmosphere. These cloud-clearing disturbances left the equator looking very bright in the infrared, and dark brownish in visible light. These disturbances lasted for 12-18 months, and we saw spectacular examples in 1973, 1979, 1992, 1999 and 2006.”

With this pattern, the researchers expected to see events in 1985 and 2013, but although the brownish equatorial colours were apparent, the clouds didn’t clear completely. 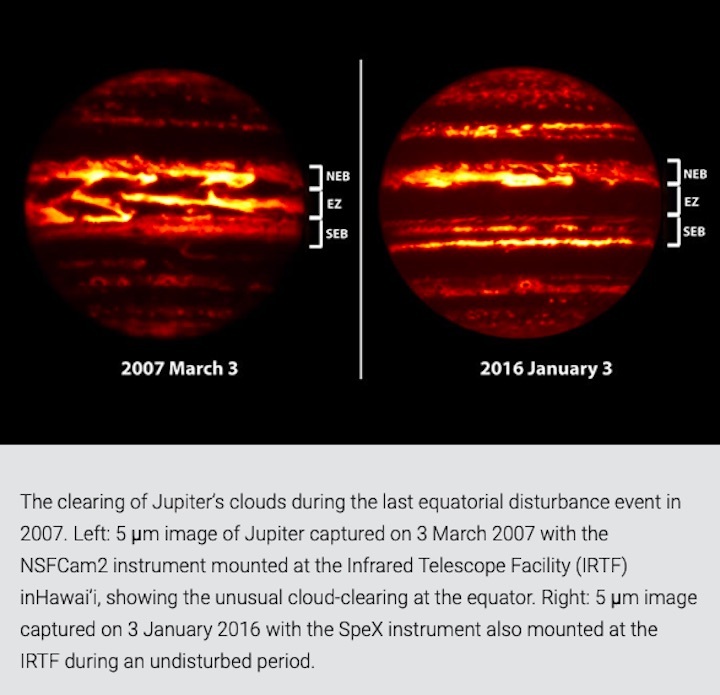 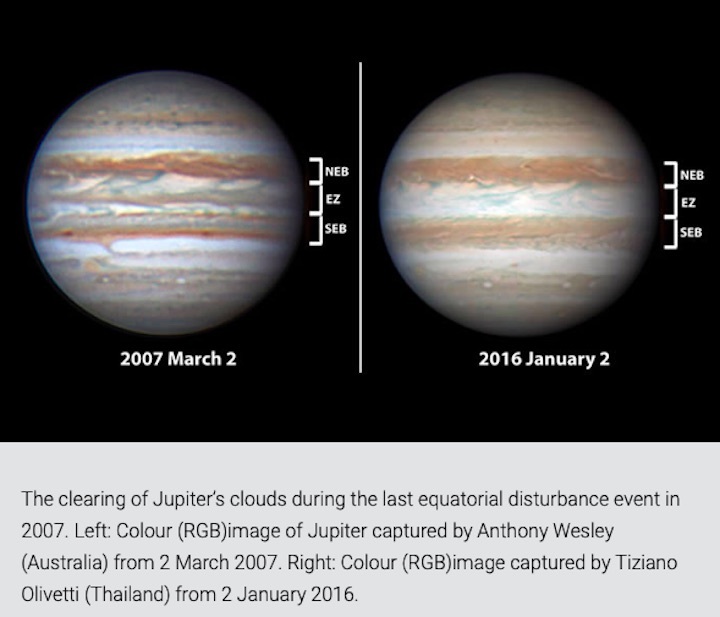 Dr Glenn Orton, a Senior Research Scientist at NASA’s Jet Propulsion Laboratory, Pasadena, California, and one of the people responsible for the enormous database of ground-based Jupiter observations used in this study, explained: “As usual, Jupiter is reluctant to give up all its secrets at once. It seems that this six-seven-year pattern isn’t perfect, and sometimes we don’t see a complete cloud-clearing disturbance.”

None of these previous equatorial disturbances have been properly analysed by a visiting spacecraft.

Dr Antuñano said: “If we follow the pattern over the last 45 years, the really exciting result of this work is that we expect to see a new event very soon, perhaps as early as next year.”

Jupiter is currently close to solar conjunction, meaning that it’s hiding away behind the Sun, and won’t become visible to Earth-based observers for the next few months. There are already tantalising hints that things are changing, with small breaks in Jupiter’s equatorial clouds apparent in the latest images.

The new study, funded by the European Research Council and NASA, could have some surprising implications for Juno’s exploration of Jupiter. Juno has been orbiting Jupiter since July 2016, returning spectacular new insights into its deep atmosphere and magnetosphere.

Dr Orton said: “Peering beneath the clouds, Juno’s microwave instrument revealed a deep column of ammonia gas rising at the equator and condensing to form those white clouds at the equator. We’re excited to see whether that deep ammonia plume is about to change during the new equatorial disturbance event.”

Indeed, the scientists suspect that the accumulation of ammonia at the equator might help to explain the bizarre six-seven year pattern of the events.

Dr Antuñano added: “These long-term observations are the key to unlocking the secrets of these slow weather patterns and climate variations on Jupiter, and allow us to place the findings of NASA’s Juno mission into the proper historical context.”

Quelle: The University of Leicester