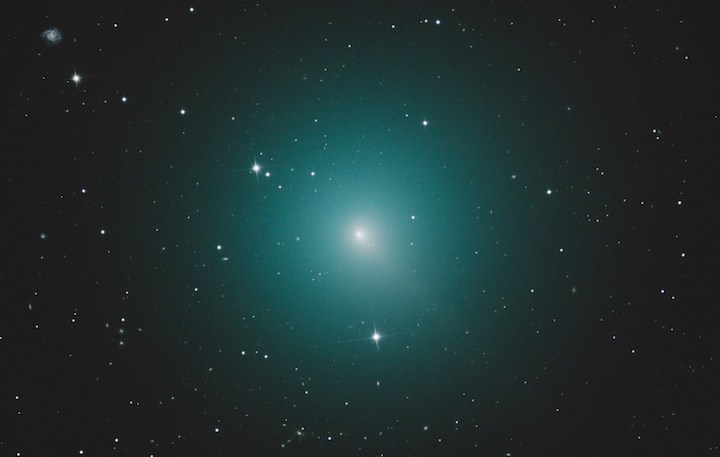 Stargazers have something extra to look forward to this holiday season: The brightest comet of 2018 will pass closest to Earth on Dec. 16.

The comet 46P/Wirtanen, which passes Earth every 5.4 years, was one of three comets discovered by Carl Wirtanen in 1948 at the Lick Observatory in California. This orbit will be one of the closest comet orbits to Earth since the 1950s, according to Space.com.

Comets are "loosely bound masses of ice, dust and rock." The central core of the structure is often only a few miles across. These cosmic phenoms usually have tails that are a result of the dust and gases that are spewed when comets heat up as they near the sun. Currently, NASA reports that there are 3,535 known comets.

The comet 46P will likely not have a large observable tail because of its relatively small size, according to Space.com. It measures 0.68 miles in diameter, one-tenth the size of the popular Halley's Comet. Currently, 46P is a small blueish object in the night sky.

At its closest point to the Earth, the comet will be at 30 times the distance the Earth is from the moon — around 7.2 million miles away — and should be observable with the naked eye from a location with little light pollution. The comet will be passing in the Southern sky, near the constellation Orion, according to CBC. Although it may be seen with the naked eye, the best ways to get a glimpse of this comet will be with binoculars or a telescope.

Astronomie - Brightest comet of 2018 to pass the closest to Earth in December The comet 46P/Wirtanen was one of three comets discovered by Carl Wirtanen in 1948 at the Lick Observatory in California.
2100 Views
Created with page4