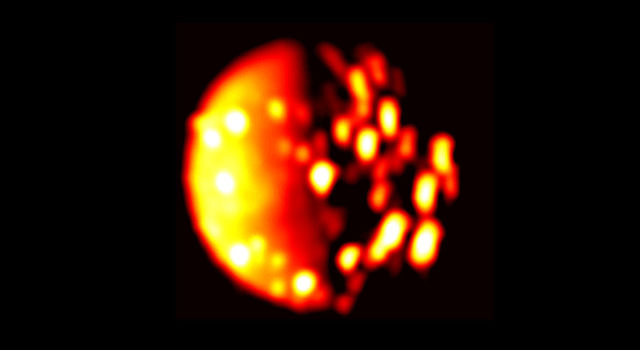 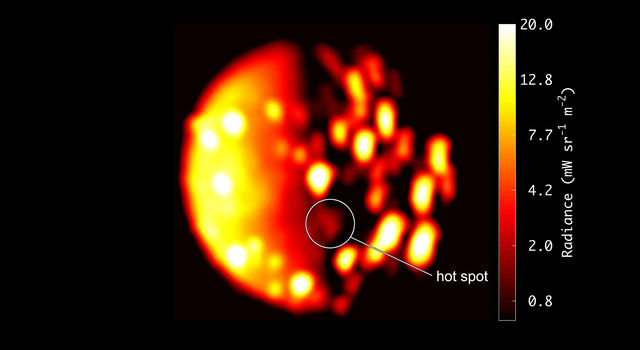 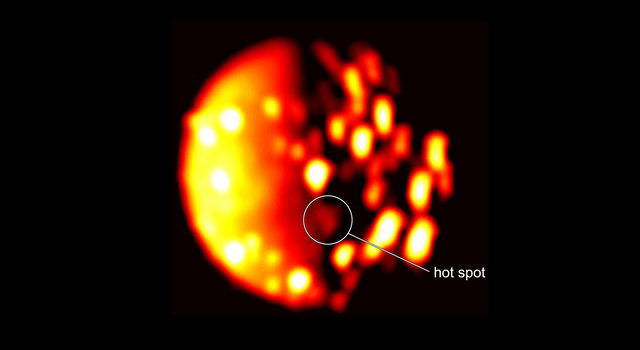 This infrared image of the southern hemisphere of Jupiter's moon Io was derived from data collected by the Jovian Infrared Auroral Mapper (JIRAM) instrument aboard NASA's Juno spacecraft on Dec. 16, 2017, when the spacecraft was about 290,000 miles (470,000 kilometers) from the Jovian moon. In this infrared image, the brighter the color the higher the temperature recorded by JIRAM. Image credit: NASA/JPL-Caltech/SwRI/ASI/INAF/JIRAM
-

Data collected by NASA's Juno spacecraft using its Jovian InfraRed Auroral Mapper (JIRAM) instrument point to a new heat source close to the south pole of Io that could indicate a previously undiscovered volcano on the small moon of Jupiter. The infrared data were collected on Dec. 16, 2017, when Juno was about 290,000 miles (470,000 kilometers) away from the moon.

"The new Io hotspot JIRAM picked up is about 200 miles (300 kilometers) from the nearest previously mapped hotspot," said Alessandro Mura, a Juno co-investigator from the National Institute for Astrophysics in Rome. "We are not ruling out movement or modification of a previously discovered hot spot, but it is difficult to imagine one could travel such a distance and still be considered the same feature."

The Juno team will continue to evaluate data collected on the Dec. 16 flyby, as well as JIRAM data that will be collected during future (and even closer) flybys of Io. Past NASA missions of exploration that have visited the Jovian system (Voyagers 1 and 2, Galileo, Cassini and New Horizons), along with ground-based observations, have located over 150 active volcanoes on Io so far. Scientists estimate that about another 250 or so are waiting to be discovered.

Juno launched on Aug. 5, 2011, from Cape Canaveral, Florida. During its mission of exploration, Juno soars low over the planet's cloud tops -- as close as about 2,100 miles (3,400 kilometers). During these flybys, Juno is probing beneath the obscuring cloud cover of Jupiter and studying its auroras to learn more about the planet's origins, structure, atmosphere and magnetosphere.