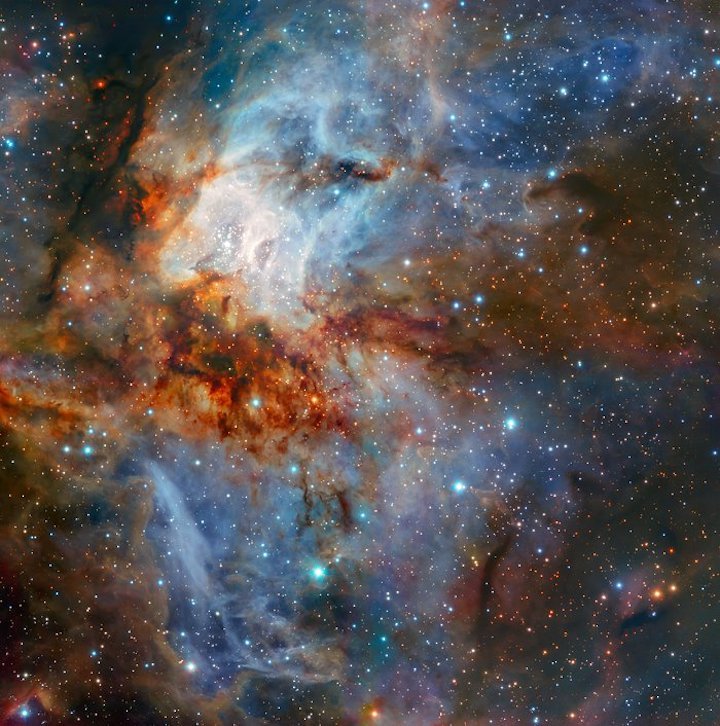 New observations with ESO’s Very Large Telescope show the star cluster RCW 38 in all its glory. This image was taken during testing of the HAWK-I camera with the GRAAL adaptive optics system. It shows RCW 38 and its surrounding clouds of brightly glowing gas in exquisite detail, with dark tendrils of dust threading through the bright core of this young gathering of stars.

This image shows the star cluster RCW 38, as captured by the HAWK-I infrared imager mounted on ESO’s Very Large Telescope (VLT) in Chile. By gazing into infrared wavelengths, HAWK-I can examine dust-shrouded star clusters like RCW 38, providing an unparalleled view of the stars forming within. This cluster contains hundreds of young, hot, massive stars, and lies some 5500 light-years away in the constellation of Vela (The Sails).

The central area of RCW 38 is visible here as a bright, blue-tinted region, an area inhabited by numerous very young stars and protostars that are still in the process of forming. The intense radiation pouring out from these newly born stars causes the surrounding gas to glow brightly. This is in stark contrast to the streams of cooler cosmic dust winding through the region, which glow gently in dark shades of red and orange. The contrast creates this spectacular scene — a piece of celestial artwork.

Previous images of this region taken in optical wavelengths are strikingly different — optical images appear emptier of stars due to dust and gas blocking our view of the cluster. Observations in the infrared, however, allow us to peer through the dust that obscures the view in the optical and delve into the heart of this star cluster.

HAWK-I is installed on Unit Telescope 4 (Yepun) of the VLT, and operates at near-infrared wavelengths. It has many scientific roles, including obtaining images of nearby galaxies or large nebulae as well as individual stars and exoplanets. GRAAL is an adaptive optics module which helps HAWK-I to produce these spectacular images. It makes use of four laser beams projected into the night sky, which act as artificial reference stars, used to correct for the effects of atmospheric turbulence — providing a sharper image.

This image was captured as part of a series of test observations — a process known as science verification — for HAWK-I and GRAAL. These tests are an integral part of the commissioning of a new instrument on the VLT, and include a set of typical scientific observations that verify and demonstrate the capabilities of the new instrument.

ESO is the foremost intergovernmental astronomy organisation in Europe and the world’s most productive ground-based astronomical observatory by far. It has 15 Member States: Austria, Belgium, the Czech Republic, Denmark, France, Finland, Germany, Italy, the Netherlands, Poland, Portugal, Spain, Sweden, Switzerland and the United Kingdom, along with the host state of Chile and with Australia as a strategic partner. ESO carries out an ambitious programme focused on the design, construction and operation of powerful ground-based observing facilities enabling astronomers to make important scientific discoveries. ESO also plays a leading role in promoting and organising cooperation in astronomical research. ESO operates three unique world-class observing sites in Chile: La Silla, Paranal and Chajnantor. At Paranal, ESO operates the Very Large Telescope and its world-leading Very Large Telescope Interferometer as well as two survey telescopes, VISTA working in the infrared and the visible-light VLT Survey Telescope. ESO is also a major partner in two facilities on Chajnantor, APEX and ALMA, the largest astronomical project in existence. And on Cerro Armazones, close to Paranal, ESO is building the 39-metre Extremely Large Telescope, the ELT, which will become “the world’s biggest eye on the sky”.