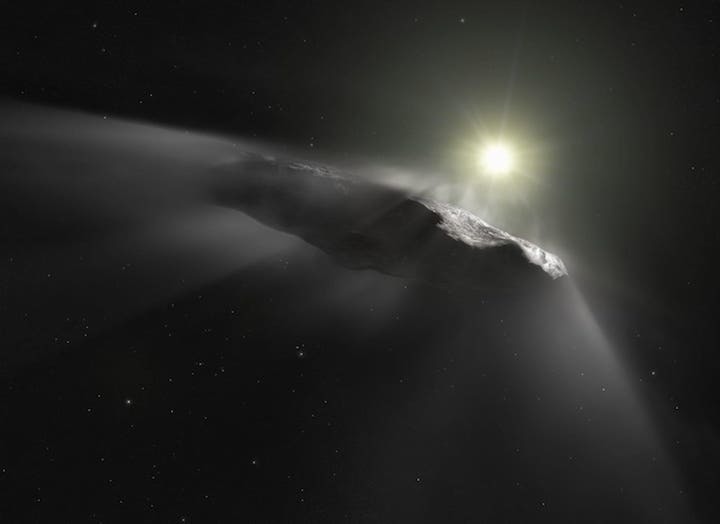 Astronomers say the first known interstellar object in our solar system is most likely a comet. They named it ’Oumuamua, the Hawaiian word for "scout." (ESA/Hubble, NASA, ESO, M. Kornmesser)

A mysterious, strangely elongated object streaking through our solar system is probably a comet. That's the conclusion of astronomers who used the Hubble Space Telescope and 27 ground-based telescopes to scrutinize the interstellar visitor, which was first detected Oct. 19. It is the first object ever seen that originated beyond our planetary neighborhood.

Their new report, published Wednesday in the journal Nature, will not close the book on what has been named 'Oumuamua, for the Hawaiian word meaning “scout.” Even if it is a comet, it's a weird one.

After astronomers spotted 'Oumuamua with a telescope in Hawaii, they struggled to classify it. A comet seemed the best guess, because such things are predicted by theorists to arrive from deep space routinely. But it didn't look like a comet. It lacked a visible atmosphere. It had no coma, no tail.

Astronomers quickly changed the classification from comet to asteroid, and then changed it again to “interstellar object.” It is the only member of that exclusive club.

Predictably, the mystery object invited speculation — at least among those with a speculative bent — that it could be artificial. Science fiction fans noted that Arthur C. Clarke's 1973 novel “Rendezvous With Rama” centers on an alleged asteroid from interstellar space that, upon closer inspection, turns out to be a giant alien starship. Although conjectured aliens are a recurring nuisance to serious scientists, in this case there was sufficient weirdness to 'Oumuamua that some astronomers used the big radio telescope in Green Bank, W.Va., to see if it might perchance be emitting signals.

It didn't look like a comet at any point in its journey. But its motion through the solar system suggested it was emitting gas from its interior when heated by the sun, according to the report in Nature. By observing the object for many weeks from multiple telescopes, astronomers were able to pick up the signature of a subtle change in acceleration that's consistent with cometary outgassing.

“We explored a variety of possible physical mechanisms to explain the acceleration we detected, and we found that comet-like outgassing works well, while the others can be ruled out," lead author Marco Micheli, an astronomer at a European Space Agency center in Frascati, Italy, said via email.

So why didn't it appear cometary? One of the paper's co-authors, Karen Meech, a University of Hawaii astronomer, said tiny dust grains that are typically on the surface of comets and blown off by outgassing may have been eroded during 'Oumuamua's journey across the galaxy. Bigger dust grains would have remained, but they'd be far fewer in number and harder to detect, she said.

Astronomers looked for the chemical signature of cyanide, which is typically ejected from comets along with water. They saw none. That's potentially a data point about the diversity of solar systems in our galaxy, Meech said.

“We’re seeing that not all solar systems are going to have the same chemical ingredients when they’re put together,” she said. “Which again is what we’d expect, but this is our first sample.”

Other astronomers are not ready to put the mystery to rest.

“I will be awaiting the submission of the data with interest to run my own analysis and see what I think,” said Gareth Williams, an astronomer with the Harvard-Smithsonian Minor Planet Center.

“I do think they have found something interesting, but I'm not sure it is quite as clear cut as it is presented in the paper,” Alan Jackson, a University of Toronto astronomer, said in an email. Jackson, who earlier this year co-wrote a paper describing 'Oumuamua as an asteroid ejected from a double-star system, noted this week that it “is a somewhat ambiguous object. The terms comet and asteroid are themselves a little ambiguous. The original, strict distinction between asteroids and comets is whether or not they have a visible coma, and from that perspective 'Oumuamua is an asteroid since it didn't.”

That view was echoed by senior scientist David Morrison of NASA's Ames Research Center, who said the distinction between a comet and an asteroid can be a bit “fuzzy.” Sometimes an object can evolve over time — becoming more like one or the other, he said.

This object is still special in any case. “It has two unique things. It’s the first object we’ve ever seen from another solar system, and its shape is unlike anything we’ve ever seen,” Morrison said. No one can say precisely what the dimensions are, but the best estimate is that it's half a mile long and only a 10th of that in diameter, according to Meech. “Cigar shaped” has been the common description.

'Oumuamua came into the solar system after cruising through the void at 59,000 miles per hour. As it neared, it sped up due to the sun's gravitational field. In September, still unseen by Earthlings, it made its closest approach to the sun — about 24 million miles. It also reached a top speed of 196,000 miles per hour. On its outbound leg the next month, it came close enough to Earth — 20 million miles — to be spotted by astronomers at the Haleakala Observatory on Maui.

Its age is unknown. The object could plausibly be the oldest thing ever detected in our solar system — older than the planets, moons, asteroids and comets that formed along with the sun about 4.6 billion years ago. It could have been ejected from another solar system when that formed billions of years earlier. In our own solar system, comets can be accelerated by Jupiter's gravitational field as well as the sun's and reach escape velocity, hurtling into interstellar space.

One of the Nature paper's co-authors, Paul Chodas of NASA's Jet Propulsion Laboratory, had closely examined comets for decades, hoping to find one with a clearly interstellar origin. He'd failed. Then along came 'Oumuamua.

“Right away, it looked like an asteroid,” Chodas said Monday. After several days observing the object, astronomers realized that its trajectory and speed indicated it must have come from beyond our solar system. The Minor Planet Center at Harvard named it Asteroid 2017 U1.

But in December came another twist, when Micheli detected something odd in its motion that suggested a factor other than the sun's gravity was affecting the acceleration.

Chodas knows the alien-spaceship crowd may not be fully satisfied with the scientific explanation involving natural outgassing. “It doesn’t act like a rocket or a spaceship. It's acting like a comet. That’s the first thing to say,” he said Tuesday. “Secondly, interstellar space just has countless billions of these objects that are thrown out in the formation of various solar systems.”

Whatever can be learned at this point about 'Oumuamua has to be gleaned from data already collected, because at 1 p.m. Eastern on Wednesday it was already 595 million miles from Earth, 13 times as faint as anything the Hubble Space Telescope can detect and headed to the middle of the galactic nowhere.

In theory, a space probe could be launched to catch up with 'Oumuamua and take a close look. Don't count on that in an era of flat space budgets, though. Whatever this thing is, it's going away — and it won't be back.