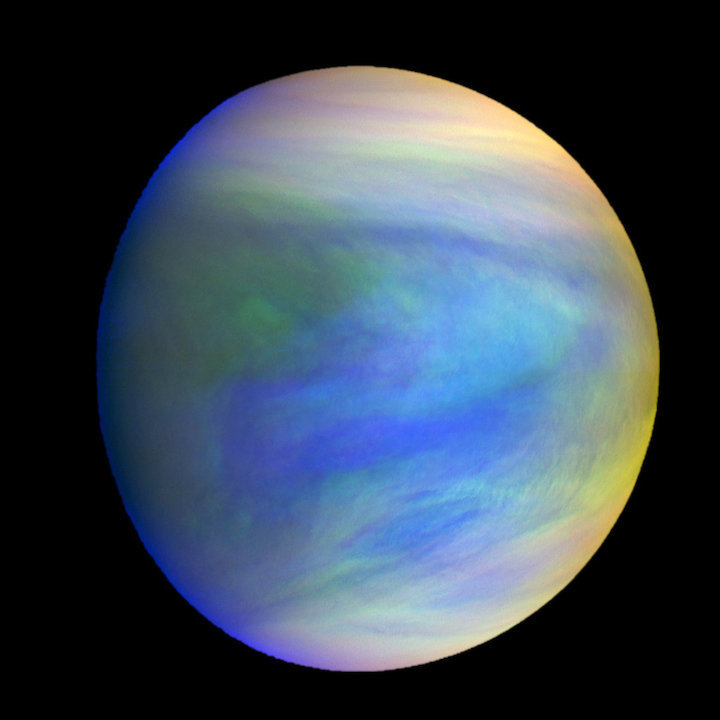 For years, scientists have been unable to agree on the length of a day on Venus, but one new study might put an end to this confusion.

The planet Venus rotates very slowly, with a single revolution taking about 243 Earth days, and this rotation rate varies. Additionally, while the planet turns slowly, its atmosphere moves dramatically faster, making a complete rotation in only four Earth days, according to a statement about the new study. However, while we can follow the planet's changing rotation, until now, scientists weren't able to clearly explain why the rate changes.

Thanks to images from the Akatsuki spacecraft of JAXA, the Japanese space agency, researchers think that they have finally found the reason behind these variations. In a new study, published today (June 18) in the journal Nature Geoscience, researchers showed how the interaction between Venus' fast-moving atmosphere and its surface, marked with volcanos and mountains, changes the speed of the planet's spin. [Japan at Venus: Akatsuki Photos of the Cloudy World]

Recently, Akatsuki spotted a huge, bow-shaped atmospheric structure on Venus. The spacecraft noticed that the structure kept disappearing and reappearing, yet it remained in the same location above mountains on the planet's surface. When researchers first studied images of the planet from Akatsuki's mission in 2015, they suggested that the strange structure was actually a fast-moving mountain wave. A mountain wave is a type of atmospheric gravity wave created by topographical elements like mountains and the way wind flows over them.

Venus' surface is difficult to image not only because of the planet's varying rotation, but also because the surface is "hidden behind a permanent, thick cloud cover," Thomas Navarro, study author and researcher at the University of California, told Space.com in an email. This has made it especially difficult for researchers to understand this phenomenon.

However, by using pictures at various wavelengths from Akatsuki, the researchers in the new study were finally able to get a clear image of the bow-shaped structure and confirm the presence of a mountain wave. They also explained how mountain waves cause Venus to spin at varying speeds: Because of the different directions of the wind flowing upstream and downstream against the mountain, "Overall, a net force is exerted on the mountain, and the whole solid body follows," Navarro said.

By learning about Venus' mountain waves, scientists can better "understand how angular momentum is transferred between the solid body [of Venus] and the atmosphere," Navarro said. In other words, because researchers have confirmed that the mysterious structure is a mountain wave, they can better study "how the atmosphere and the solid body affect each other, and why Venus is the way that it is," he said.