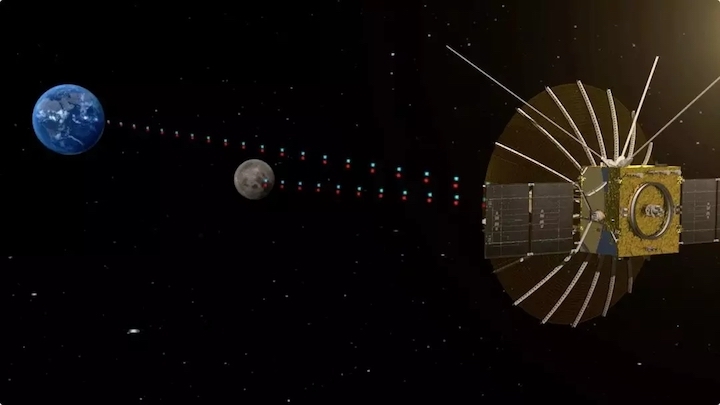 A rendering of the Queqiao Chang'e-4 lunar satellite performing its communications relay functions beyond the Moon. Chinese Academy of Sciences

The Queqiao Chang'e-4 relay satellite has passed the Moon and successfully performed a propulsive manoeuvre to slow itself and send it towards its intended destination beyond the Moon.

The Beijing Aerospace Control Centre (BACC) issued the command at 21:32 Beijing time (13:32 UTC), and by 21:46 confirmed through telemetry that Queqiao had performed the burn and entered a transfer orbit towards the second Earth-Moon Lagrange point, People's Liberation Army Daily reported.

The spacecraft passed the Moon at 100 km above the surface at closest approach. Failure to perform the braking manoeuvre would have seen the spacecraft head back towards the Earth.

The Queqiao satellite was launched on late on Sunday, and its main role is to act as a communications relay between the Earth and a lander and rover than China aims to launch to the far side of the Moon late this year.

It also carries a pioneering low-frequency astronomy instrument that will attempt to detect a signal from the cosmic dark ages.

For latest news and developments on the mission, see our feature on China's Chang'e-4 mission to the far side of the Moon

An animated demonstration of the role of the Queqiao Chang'e-4 lunar relay satellite. CAS