In SUNlite 9-5, I noted in the “Who’s blogging” section a video that had been circulating as evidence of an orb. I also noted that Scott Brando had explained it as a video of the International Space Station (ISS). In response, the witnesses chose to dispute this solution by presenting an extensive video rebuttal. 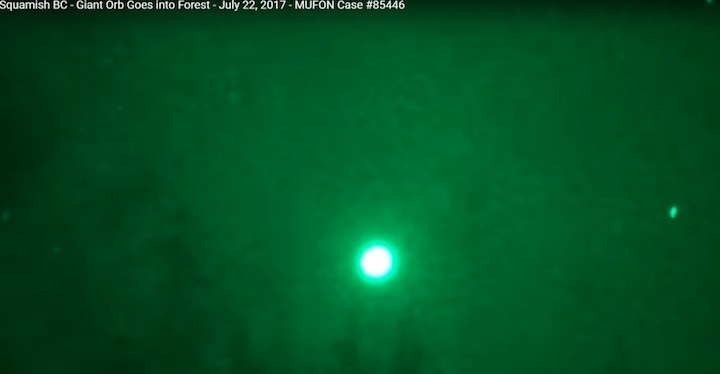 The video surfaced on August 3rd, where a coast-to-coast AM article declared it a “mystifying orb”. 1 According to the MUFON UFO report filed by the witnesses:

We were just east of Squamish, BC, Canada on the Mamquam River Forest Service Road just north of “The Chief”, a granite monolith, the second biggest in the world of this kind, which is considered sacred by the local indigenous people.

We went there because, in speaking with local people earlier that day, they said orbs have been spotted in the past over & near the moun- tain. We had driven around the whole area to find this somewhat private spot to view the mountain.

I had turned the recording off on all the cameras to check the batteries, how much was left on the cards, etc & was just casually standing around talking to the others when one member of our group said “Is that a plane?” It was exactly 10:59 PM.

So just in case it wasn’t a plane, I went to the tripod quickly, hit the record button of the night vision scope fast & found the object in the screen .. there wasn’t any time to turn to do anything else, like hitting the record button of the other cameras on the tripod as I wanted to make sure to keep my eye on the screen of the NV & follow it .. as it turned out there was only 10 secs of video captured of the object before it totally disappeared into the deep woods.

While I watched it go across the sky evenly & on a straight path & into the woods, I noticed right away that trees in the foreground blocked out the light, while the trees behind the orb were lit up very brightly. You can hear me in the video saying “oh”, because when I saw the trees behind it being lit, and there was no sound, I knew this was no airplane.

We were all quite excited & exhilarated over what we had seen & replayed the video many times to study it & confirm to ourselves that we had something special here.2

The witnesses were Rob Freeman and Marcus McNabb, who specialize in recording aerial anomalies. They described themselves as filmmakers and seemed to have quite an array of equipment. Unfortunately, only one camera recorded the event.

The Coast-to-Coast article added that an expert had determined that it could not be identified:

A seasoned skywatcher from the area, Charles Lamoureux, examined the footage and concluded that the light did not come from any obvious source such as a drone, meteor, or satellite.3

This all sounded pretty good but, when I saw the video I suspected that it was not extraordinary. Others did as well and were quick to identify the source of the “orb”.

Scott Brando, who runs the “UFO of interest” blog/facebook site, quickly identified the object as the ISS a day later and announced

At the time, I felt that Scott had a valid argument and mentioned it in SUNlite 9-5. However, those that recorded the object dis- agreed and began a campaign to sell the idea to their followers that the ISS was an impossible explanation.

It seems that UFO videographers rarely, if ever, accept explanations for their UFO videos once they had promoted them as some- thing that was not mundane. Rob Freeman responded to Brando and stated that top experts at MUFON were going to evaluate the film. He also argued that the orb was not behind the mountains but had disappeared into the trees because the trees were being illuminated by the orb. This rebuttal really did not have any teeth because when the ISS is bright, it can illuminate the sur- rounding area of the sky. The amplification of this light by the night vision equipment can make it appear that the trees were being illuminated by the “orb”.

Wanting to put the ISS explanation to bed, Freeman produced a video demonstrating it was not the ISS.5 Freeman states he used two different Apps to demonstrate that on the night in question (July 22nd), the ISS started its trek across the sky at 2237 PM PDT at an azimuth of 216 degrees. At 2242 PM PDT, the azimuth of the ISS was 145 degrees and its elevation was 25 degrees. It then proceed to the east and was at azimuth 74 degrees at 2247 PM PDT. Freeman then showed the location the “orb” was seen at an azimuth of around 125 degrees and an elevation of about 33-35 degrees using a phone theodolite application.

One of the things that struck me as odd as how Freeman had determined, using two different applications, that the ISS had been traversing the sky at a different time than Scott Brando had done when he attempted to debunk the video. His track, which he had acquired from Stellarium, showed the ISS in the vicinity at 2259 and not 2242 as mentioned by Freeman. One of the tracks was wrong but which.

It is not hard to determine which track was wrong and most satellite observers could easily explain the difference. When Freeman was using his applications, it was September 10th. Any Application running on a phone or computer would use the Two Line Ele- ments (TLEs) that were applicable on that date. The TLEs for satellites vary due to atmospheric drag. Every so often the space station has to boost its orbit to compensate for this. This also changes the TLEs. Therefore, Freeman’s track was probably wrong because the applications he was using were set for the September 10 TLE. Brando’s track, which was computed using TLEs on August 4, would probably have been much closer to the actual track.

To check this, I ran the TLEs for the ISS from July 21 and September 10.6 These are the elements and the track across the sky they produce on July 22, 2017 using Heavensat:

The July 21 track closely matches the track published by Scott Brando and the September 10 TLEs is similar to the track mentioned by Freeman. There is a difference but this is probably due to his Applications using TLEs from a few days prior to September 10. TLEs from September 8 produced a track that was closer to the one he described.

The important thing to consider here is that the July 21 TLE track shows the ISS passing very close to the position in the sky around the same time as the object recorded in the video! According to this track, the ISS passed by the azimuth of 125 degrees around 2300 PM PDT at an elevation of around 31 degrees. Considering the margin of error for the time of the event (within one minute of the sighting time) and the elevation angle (within a few degrees of the elevation angle), it is too close to ignore. The differences can be accounted for due to changes in the ISS orbit between July 21 and 22, the position of the camera in Freeman’s video not being in the same exact location as his cameras on July 22, Variations in the Heavensat program, and potential errors in his theodolite app.

In order to see the margin of error in his theodolite app, I checked it against Google Earth and his position. The values were not even close. The azimuth for the Peak, using Google Earth and his position, was about 200 degrees. However, his app shows the azimuth to be 169 degrees.7 This makes it an azimuth error of about 30 degrees. If we add that error to his position for the orb pass, we dis- cover the actual azimuth was about 155 degrees. The ISS was at this azimuth at 22:59:18. Suddenly, the errors that were discussed above became very small. We now had a difference of 18 seconds and not one minute. Additionally, the ISS was at a higher point in its trajectory. The elevation angle was just under 33 degrees (Heavensat lists it as 32.9 degrees). This roughly matched the elevation angle above the ridge that Freeman had measured using his phone application.

The new azimuth also explained another anomaly I had in trying to determine the star field the object was passing through. With an azimuth of 125 degrees, the star field would have been in the Delphinus/Aquarius region. Try as I might, I could not find the stars in the video. I assumed this was because the field of view was too small and the brighter stars were not as bright as they appeared. With the new azimuth the star field problem resolved itself.

The bright star the orb initially passed near was lambda Aquila. Its azimuth and elevation at 225916 local time was 157.3 degrees and about 33 degrees. When one compares the surrounding star field with that star, many of them fall into place. The only differ- ences probably had a lot to do with the performance of the night vision instrument. The above images show the position of the ISS at 225916 (left) and the star field using Stellarium with the “orb” and its direction of motion one can see in the video. To me this is very convincing evidence that proves the original conclusion drawn by Scott Brando. There is little doubt that the “orb” was the ISS.

It is amazing that Mr. Freeman, and his associates, could not figure this out. They proclaim themselves to be experts on things visible at night but this demonstrates they are far from it. One of the first things one does is plot an objects path across the night sky. Once that plot is complete, others can evaluate what has been seen if they could not identify it. Instead, they did not bother to figure out azimuth and elevation until over a month later. Even when they did that, they got it wrong because they were reliant on technology they did not understand instead of simply looking at a map.

I am also wondering why the huge camera array being used by Freeman did not record the event or, if they did, why these videos were not presented. Is it possible that there are other videos of the object that don’t quite show the object as exotic as it appears in the night vision video?

This all reminds me of something Alan Hendry once observed:

... for a field that is composed of individuals who profess to be intrigued by aerial anomalies, there is widespread ignorance about even the most basic characteristics or sources like meteors, ad planes, and balloons.

Despite all of Mr. Freeman’s technical expertise and equipment, he appears ignorant of basic astronomy. He gave no plot of the UFOs path despite seeing it real time and then compounded this error by not understanding that the orbit of the ISS changes over time. Freeman should have been curious as to why his track and Brando’s track were different but any curiosity was apparently ignored in favor of trying to reinforce his belief that he recorded something exotic. His argument failed due to confirmation bias.

Of course, this raises serious questions about Freeman’s, and his associate’s, research. Can we really consider anything they present as something that was thoroughly researched?

... for a field that is composed of individuals who profess to be intrigued by aerial anomalies, there is widespread ignorance about even the most basic characteristics or sources like meteors, ad planes, and balloons.
Allan Hendry , The UFO Handbook