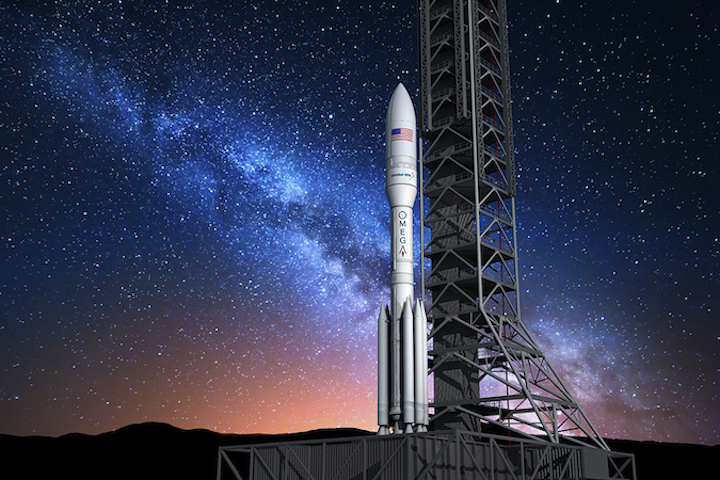 Orbital ATK’s proposed rocket to answer the U.S. Air Force’s desire for two families of satellite launchers with U.S.-made propulsion systems will be named OmegA, and the company has selected the cryogenic Aerojet Rocketdyne RL10 engine to power the vehicle’s upper stage, officials announced this week.

The OmegA rocket could launch for the first time in 2021, but Orbital ATK is competing against several aerospace companies for a pot of Air Force funding the military is expected to award this summer. Blue Origin, SpaceX and United Launch Alliance are expected to compete for the government support, and then Air Force says it will make up to three funding awards.

“The RL10 has provided reliable upper stage propulsion for more than five decades and we look forward to continuing that legacy with Orbital ATK and its OmegA rocket,” said Eileen Drake, Aerojet Rocketdyne’s CEO and president, in a statement. “By selecting the RL10, Orbital ATK is able to leverage investments made by the U.S. Air Force and others to build resilient space launch capabilities for our nation.”

Orbital ATK officials said the OmegA rocket’s development has advanced over the past three years with a more than $250 million joint investment with the Air Force. The company ranks the launcher project — the most powerful rocket yet developed by the commercial space firm — as one of its top strategic programs, and Orbital ATK said in a press release it has committed an “even larger” investment to complete OmegA development and certification.

“Orbital ATK is very excited to partner with the U.S. Air Force to develop OmegA, our new EELV-class launch vehicle,” said Scott Lehr, president of Orbital ATK’s flight systems group, in a statement. “Our OmegA rocket provides the best combination of performance, affordability and reliability to support the full range of our customers’ mission requirements.”

“The RL10 has an extensive flight history and provides a low-risk, affordable engine with outstanding performance,” said Mike Pinkston, deputy general manager of Orbital ATK’s launch vehicles division. “OmegA is a robust all-American launch system with its entire design based on flight-proven technologies and common components from Orbital ATK’s diversified lineup of rockets and propulsion systems.” 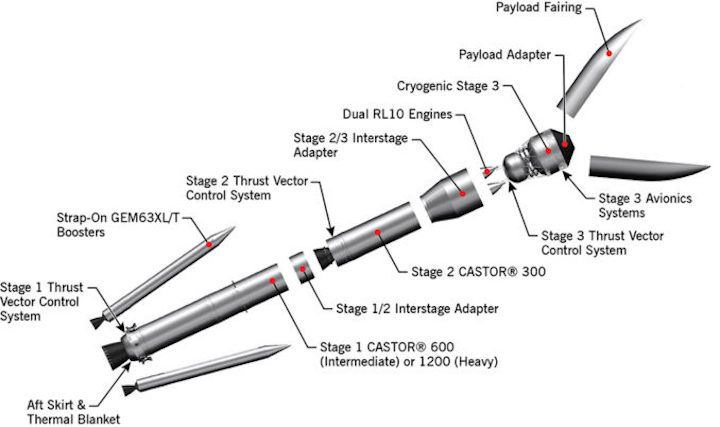 Orbital ATK said it named the rocket for the Omega Centauri star cluster, with the capitalized “O” and “A” representing the company’s name. Orbital ATK’s other launchers, like the Pegasus, Taurus and Antares, are named for constellations and stars.

The OmegA rocket, previously known as the Next Generation Launch system, will use segmented solid rocket motors based on the posters Orbital ATK built for the space shuttle. But engineers developed a new composite case to replace the metallic structures used for the shuttle, making the OmegA solid motors lighter and easier to manufacture, according to Mike Laidley, Orbital ATK’s vice president for the OmegA program.

The OmegA rocket will come in two basic versions: an intermediate and a heavy configuration.

Both configurations would have a single-segment Castor 300 second stage motor, built using the same tooling as the multi-segment first stage motors at Orbital ATK’s facility in Promontory, Utah.

Up to six strap-on solid rocket boosters could be added to the OmegA rocket to lift heavier payloads into space.

The intermediate version of the OmegA rocket could launch for the first time in 2021 from pad 39B at NASA’s Kennedy Space Center in Florida. The heavy configuration is expected to fly in 2024.

The OmegA rocket will be fully expendable, and the company aims to reduce costs through simpler manufacturing processes and shared costs with other Orbital ATK programs. Officials have not disclosed how much each OmegA flight will cost.

According to an Orbital ATK fact sheet, the intermediate version of OmegA will lift between 10,800 pounds (4,900 kilograms) and around 22,300 pounds (10,100 kilograms) into a geostationary transfer orbit, an elliptical loop around Earth commonly by communications satellites transiting to geostationary orbit more than 22,000 miles (nearly 36,000 kilometers) over the equator.

That performance range is comparable to the lift capacity of ULA’s Atlas 5 rocket family.

The heavy OmegA configuration can loft between roughly 11,600 pounds (5,250 kilograms) and 17,200 pounds (7,800 kilograms) of payload directly into geostationary orbit — eliminating the need for a spacecraft to use its own fuel for major orbital maneuvers.

The OmegA’s exact performance capability depends on the number of solid-fueled boosters added to the rocket.

A previous round of Air Force funding awarded to Orbital ATK — along with ULA, SpaceX and Aerojet Rocketdyne — was limited to development of the Common Booster Segment, the name for each segment the OmegA’s core solid-fueled Castor 1200, 600 and 300 rocket motors. Early design work on the rest of the rocket was funded by Orbital ATK’s internal coffers.

If Orbital ATK wins a further tranche of Air Force funding this summer, the money will complete the development of the launcher’s solid-fueled core stage and prepare for a ground test-firing of the motor next year. Orbital ATK said engineers have built four composite cases for ground testing of the OmegA’s core motor, and technicians will begin pouring an inert propellant mixture into one of the test casings for the first time next week.

The Air Force plans to down-select to two launch providers in late 2019, giving the military two contractors capable of delivering all the U.S. government’s defense-related payloads to orbit.

ULA and SpaceX currently provide launch services for the government’s most critical national security payloads, but ULA’s Atlas 5 rocket uses a Russian-made main engine, and ULA admits its Delta 4 rocket is too expensive to be competitive. SpaceX’s Falcon 9 rocket is less expensive and uses U.S.-made engines, but the company’s bigger Falcon Heavy rocket is not yet certified by the Air Force for national security missions. The Falcon Heavy could be certified as soon as next year after further successful flights, which will make it eligible to compete for Air Force EELV-class contracts following a flawless maiden test launch Feb. 6.