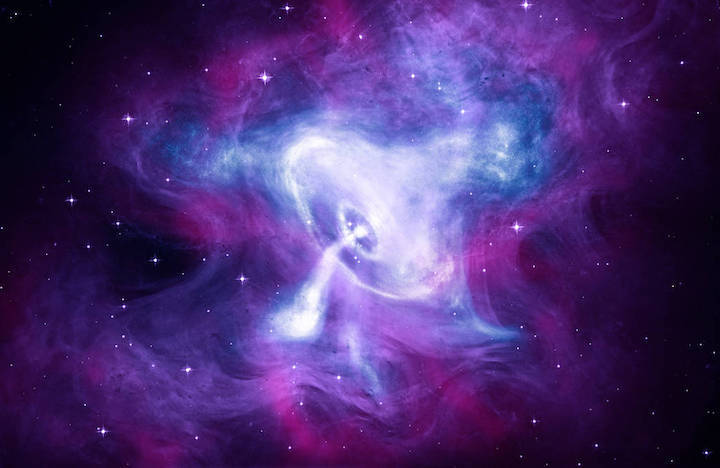 Next year marks the 20th anniversary of NASA’s Chandra X-ray Observatory launch into space. The Crab Nebula was one of the first objects that Chandra examined with its sharp X-ray vision, and it has been a frequent target of the telescope ever since.

There are many reasons that the Crab Nebula is such a well-studied object. For example, it is one of a handful of cases where there is strong historical evidence for when the star exploded. Having this definitive timeline helps astronomers understand the details of the explosion and its aftermath.

In the case of the Crab, observers in several countries reported the appearance of a “new star” in 1054 A.D. in the direction of the constellation Taurus. Much has been learned about the Crab in the centuries since then. Today, astronomers know that the Crab Nebula is powered by a quickly spinning, highly magnetized neutron star called a pulsar, which was formed when a massive star ran out of its nuclear fuel and collapsed. The combination of rapid rotation and a strong magnetic field in the Crab generates an intense electromagnetic field that creates jets of matter and anti-matter moving away from both the north and south poles of the pulsar, and an intense wind flowing out in the equatorial direction.

The latest image of the Crab is a composite with X-rays from Chandra (blue and white), NASA's Hubble Space Telescope (purple) and NASA's Spitzer Space Telescope (pink). The extent of the X-rays in this image is smaller than the others because extremely energetic electrons emitting X-rays radiate away their energy more quickly than the lower-energy electrons emitting optical and infrared light.

This new composite adds to a scientific legacy, spanning nearly two decades, between Chandra and the Crab Nebula. Here is a sample of the many insights astronomers have gained about this famous object using Chandra and other telescopes.

1999:
Within weeks of being deployed into orbit from the Space Shuttle Columbia during the summer of 1999, Chandra observed the Crab Nebula. The Chandra data revealed features in the Crab never seen before, including a bright ring of high-energy particles around the heart of the nebula.
http://chandra.harvard.edu/photo/1999/0052/

2002:
The dynamic nature of the Crab Nebula was vividly revealed in 2002 when scientists produced videos based on coordinated Chandra and Hubble observations made over several months. The bright ring seen earlier consists of about two dozen knots that form, brighten and fade, jitter around, and occasionally undergo outbursts that give rise to expanding clouds of particles, but remain in roughly the same location.

These knots are caused by a shock wave, similar to a sonic boom, where fast-moving particles from the pulsar are slamming into surrounding gas. Bright wisps originating in this ring are moving outward at half the speed of light to form a second expanding ring further away from the pulsar.
http://chandra.harvard.edu/photo/2002/0052/

2006:
In 2003, the Spitzer Space Telescope was launched and the space-based infrared telescope joined Hubble, Chandra, and the Compton Gamma-ray Observatory and completed the development of NASA’s “Great Observatory” program. A few years later, the first composite of the Crab with data from Chandra (light blue), Hubble (green and dark blue), and Spitzer (red) was released.
http://chandra.harvard.edu/photo/2006/crab/

2008:
As Chandra continued to take observations of the Crab, the data provided a clearer picture of what was happening in this dynamic object. In 2008, scientists first reported a view of the faint boundary of the Crab Nebula's pulsar wind nebula (i.e., a cocoon of high-energy particles surrounding the pulsar).

The data showed structures that astronomers referred to as “fingers”, “loops”, and “bays”. These features indicated that the magnetic field of the nebula and filaments of cooler matter are controlling the motion of the electrons and positrons. The particles can move rapidly along the magnetic field and travel several light years before radiating away their energy. In contrast, they move much more slowly perpendicular to the magnetic field, and travel only a short distance before losing their energy.
http://chandra.harvard.edu/photo/2008/crab/

2011:
Time-lapse movies of Chandra data of the Crab have been powerful tools in showing the dramatic variations in the X-ray emission near the pulsar. In 2011, Chandra observations, obtained between September 2010 and April 2011, were obtained to pinpoint the location of remarkable gamma-ray flares observed by NASA's Fermi Gamma Ray Observatory and Italy's AGILE Satellite. The gamma-ray observatories were not able to locate the source of the flares within the nebula, but astronomers hoped that Chandra, with its high-resolution images, would.

2014:
To celebrate the 15th anniversary of Chandra’s launch, several new images of supernova remnants were released, including the Crab Nebula. This was a “three color” image of the Crab Nebula, where the X-ray data were split into three different energy bands. In this image, the lowest-energy X-rays Chandra detects are red, the medium range are green, and the highest-energy X-rays from the Crab are colored blue. Note that the extent of the higher energy X-rays in the image is smaller than the others. This is because the most energetic electrons responsible for the highest energy X-rays radiate away their energy more quickly than the lower-energy electrons.
http://chandra.harvard.edu/photo/2014/15year/

2017:
Building on the multiwavelength images of the Crab from the past, a highly detailed view of the Crab Nebula was created in 2017 using data from telescopes spanning nearly the entire breadth of the electromagnetic spectrum. Radio waves from the Karl G. Jansky Very Large Array (red), Hubble optical data (green), infrared data from Spitzer (yellow), and X-ray data from XMM-Newton (blue) and Chandra (purple) produced a spectacular new image of the Crab.
http://chandra.harvard.edu/photo/2017/crab/

Astronomie - A Crab Walks Through Time
1113 Views
Created with page4