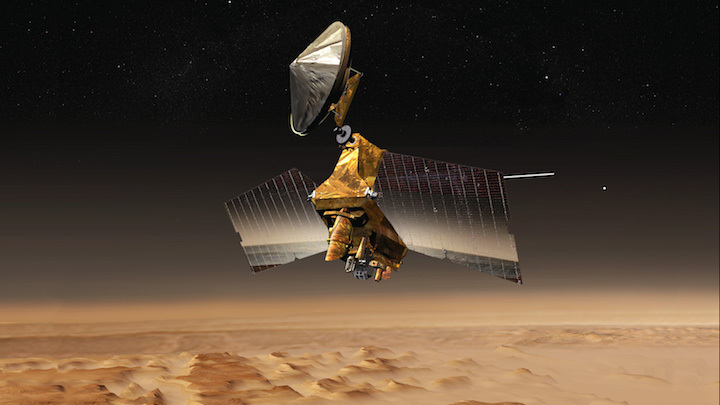 NASA's Mars Reconnaissance Orbiter (MRO), at Mars since 2006, put itself into a precautionary standby mode on Feb. 15 in response to sensing an unexpectedly low battery voltage.

The orbiter is solar-powered but relies on a pair of nickel-hydrogen batteries during periods when it is in the shadow of Mars for a portion of each orbit. The two are used together, maintaining almost identical charge during normal operations.

The spacecraft remains in communication with Earth and has been maintaining safe, stable temperatures and power, but has suspended its science observations and its service as a communications relay for Mars rovers. Normal voltage has been restored, and the spacecraft is being monitored continuously until the troubleshooting is complete.

"We're in the diagnostic stage, to better understand the behavior of the batteries and ways to give ourselves more options for managing them in the future," said MRO Project Manager Dan Johnston of NASA's Jet Propulsion Laboratory, Pasadena, California. "We will restore MRO's service as a relay for other missions as soon as we can do so with confidence in spacecraft safety -- likely in about one week. After that, we will resume science observations."

NASA's Mars Reconnaissance Orbiter entered orbit around the Red Planet on March 10, 2006. Since then, it has returned more data than all other past and current interplanetary missions combined, with a tally of more than 317 terabits so far.

The mission met all its science goals in a two-year primary science phase. Five extensions, the latest beginning in 2016, have added to the science returns. The longevity of the mission has given researchers tools to study seasonal and longer-term changes on Mars. Among other current activities, the orbiter is examining possible landing sites for future missions to Mars and relaying communications to Earth from NASA's two active Mars rovers.

JPL, a division of Caltech in Pasadena, manages the Mars Reconnaissance Orbiter for NASA's Science Mission Directorate, Washington. Lockheed Martin Space, Denver, built the orbiter and collaborates with JPL to operate it.