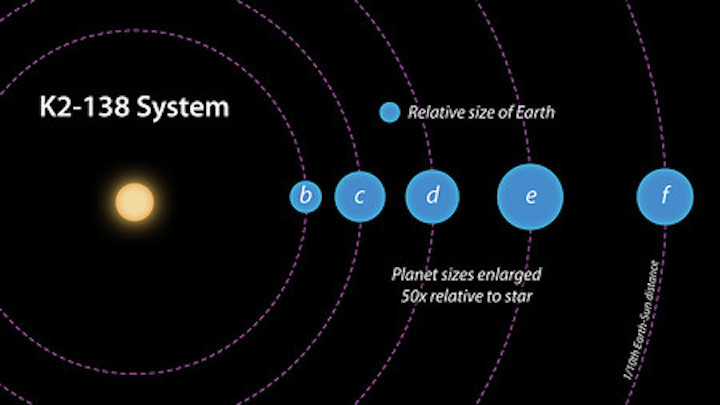 Artist's concept of a top-down view of the K2-138 system discovered by citizen scientists, showing the orbits and relative sizes of the five known planets. Orbital periods of the five planets, shown to scale, fall close to a series of 3:2 mean motion resonances. This indicates that the planets orbiting K2-138, which likely formed much farther away from the star, migrated inward slowly and smoothly.

In its search for exoplanets—planets outside of our solar system—NASA's Kepler telescope trails behind Earth, measuring the brightness of stars that may potentially host planets. The instrument identifies potential planets around other stars by looking for dips in the brightness of the stars that occur when planets cross in front of, or transit, them. Typically, computer programs flag the stars with these brightness dips, then astronomers look at each one and decide whether or not they truly could host a planet candidate.

Over the three years of the K2 mission, 287,309 stars have been observed, and tens of thousands more roll in every few months. So how do astronomers sift through all that data?

"People anywhere can log on and learn what real signals from exoplanets look like, and then look through actual data collected from the Kepler telescope to vote on whether or not to classify a given signal as a transit, or just noise," says Christiansen. "We have each potential transit signal looked at by a minimum of 10 people, and each needs a minimum of 90 percent of 'yes' votes to be considered for further characterization."

In early April, just two weeks after the initial prototype of Exoplanet Explorers was set up on Zooniverse, it was featured in a three-day event on the ABC Australia television series Stargazing Live. In the first 48 hours after the project was introduced, Exoplanet Explorers received over 2 million classifications from more than 10,000 users. Included in that search was a brand-new dataset from the K2 mission—the reincarnation of the primary Kepler mission, ended three years ago. K2 has a whole new field of view and crop of stars around which to search for planets. No professional astronomer had yet looked through this dataset, called C12.

Back in California, Crossfield and Christiansen joined NASA astronomer Geert Barentsen, who was in Australia, in examining results as they came in. Using the depth of the transit curve and the periodicity with which it appears, they made estimates for how large the potential planet is and how close it orbits to its star. On the second night of the show, the researchers discussed the demographics of the planet candidates found so far—44 Jupiter-sized planets, 72 Neptune-sized, 44 Earth-sized, and 53 so-called Super Earth's, which are larger than Earth but smaller than Neptune.

"We wanted to find a new classification that would be exciting to announce on the final night, so we were originally combing through the planet candidates to find a planet in the habitable zone—the region around a star where liquid water could exist," says Christiansen. "But those can take a while to validate, to make sure that it really is a real planet and not a false alarm. So, we decided to look for a multi-planet system because it's very hard to get an accidental false signal of several planets."

After this decision, Barentsen left to get a cup of tea. By the time he returned, Christiansen had sorted the crowdsourced data to find a star with multiple transits and discovered a star with four planets orbiting it. Three of the four planets had 100 percent "yes" votes from over 10 people, and the remaining one had 92 percent "yes" votes. This is the first multi-planet system of exoplanets discovered entirely by crowdsourcing.

After the discovery was announced on Stargazing Live, Christiansen and her colleagues continued to study and characterize the system, dubbed K2-138. They statistically validated the set of planet signals as being "extremely likely," according to Christiansen, to be signals from true planets. They also found that the planets are orbiting in an interesting mathematical relationship called a resonance, in which each planet takes almost exactly 50 percent longer to orbit the star than the next planet further in. The researchers also found a fifth planet on the same chain of resonances, and hints of a sixth planet as well. A paper describing the system has been accepted for publication in The Astronomical Journal.

This is the only system with a chain of unbroken resonances in this configuration, and may provide clues to theorists looking to unlock the mysteries of planet formation and migration.

"The clockwork-like orbital architecture of this planetary system is keenly reminiscent of the Galilean satellites of Jupiter," says Konstantin Batygin, assistant professor of planetary science and Van Nuys Page Scholar, who was not involved with the study. "Orbital commensurabilities among planets are fundamentally fragile, so the present-day configuration of the K2-138 planets clearly points to a rather gentle and laminar formation environment of these distant worlds."

"Some current theories suggest that planets form by a chaotic scattering of rock and gas and other material in the early stages of the planetary system's life. However, these theories are unlikely to result in such a closely packed, orderly system as K2-138," says Christiansen. "What's exciting is that we found this unusual system with the help of the general public."

The paper is titled "The K2-138 system: A Near-Resonant Chain of Five Sub-Neptune Planets Discovered by Citizen Scientists." In addition to Christiansen, Crossfield, and Barentsen; other coauthors include Chris Lintott, Campbell Allen, Adam McMaster, Grant Miller, Martin Veldthuis of the University of Oxford; Thomas Barclay of NASA Goddard and the University of Maryland; Brooke Simmons of UC San Diego; Caltech postdoctoral scholar Erik Petigura; Joshua Schlieder of NASA Goddard; Courtney Dressing of UC Berkeley; Andrew Vanderburg of Harvard; Sarah Allen and Zach Wolfenbarger of the Adler Planetarium; Brian Cox of the University of Manchester; Julia Zemiro of the Australian Broadcasting Corporation; Caltech Professor of Astronomy Andrew Howard; John Livingston of the University of Tokyo; Evan Sinukoff of the Australian Broadcasting Corporation and the University of Hawai'i at Manoa; Timothy Catron of Arizona State University; Andrew Grey, Joshua Kusch, Ivan Terentev, and Martin Vales of Zooniverse as part of the University of Oxford; and Martti Kristiansen of the Technical University of Denmark. Funding was provided by the NASA Science Mission Directorate, Google, the Alfred P. Sloan Foundation, NASA, the National Science Foundation, the U.S. Department of Energy, the Japanese Monbukagakusho, the Max Planck Society, and the Higher Education Funding Council for England.