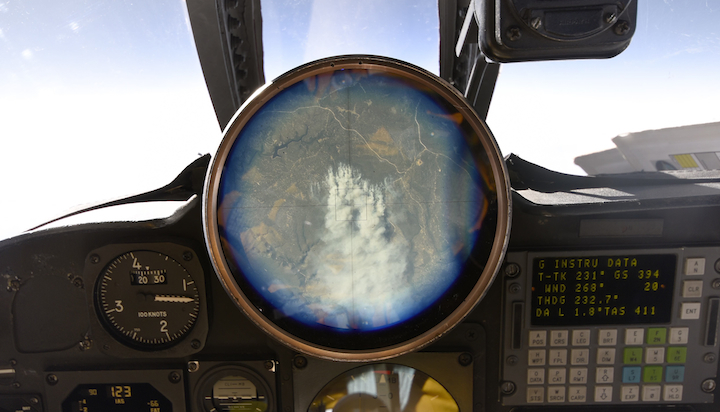 The cock-pit view finder in the ER-2 shows a controlled fire burning near Flagstaff, Arizona on Nov. 7, 2017. This small fire event offered the ACEPOL science team a different test environment to observe with the polarimeter and lidar instruments onboard the aircraft.
Credits: NASA / Stu Broce

Aerosols are small solid or liquid particles suspended in the Earth’s atmosphere, like fine dust, smoke, pollen or soot. These particles scatter and absorb sunlight and are critical to the formation of clouds and precipitation. Scientists can analyze this scattered light using instruments like polarimeters, which measure the color and polarization of the scattered light, and lidars, which use lasers to probe the atmosphere. Together these data sets provide key information about aerosol properties including size, shape and chemical composition—information which provides better understanding and assessment of their effects on weather, climate and air quality.

Prior to being launched into space, airborne versions of satellite sensors typically take a test ride on NASA’s ER-2 high altitude aircraft. The platform, based at NASA’s Armstrong Flight Research Center in Palmdale, Calif., flies at altitudes of up to 70,000 ft., and provides a vantage point and conditions similar to space. By flying these instruments on an aircraft before the expense of launching them into space, scientists and engineers can make adjustments to the hardware and data retrieval algorithms.

The ER-2 also enables scientists to observe specific events of interest like wildfires or volcanic eruptions to gain a more comprehensive collection of different types of aerosols in different conditions.  The aircraft test phase in sensor development is helpful for ensuring instruments are collecting both accurate and useful data prior to the time the final version of the sensors makes its trip into space.

In addition to testing capabilities of new sensors, ACEPOL flights also provided calibration and evaluation data for NASA’s CALIPSO satellite lidar by staging satellite underpasses as part of their flight plans. In addition to comparisons with CALIPSO, ACEPOL also contributes to the development of future satellite missions including the European Space Agency’s EarthCare, the European Organization for the Exploitation of Meteorological Satellites METOP-SG , and NASA’s MAIA and PACE programs. 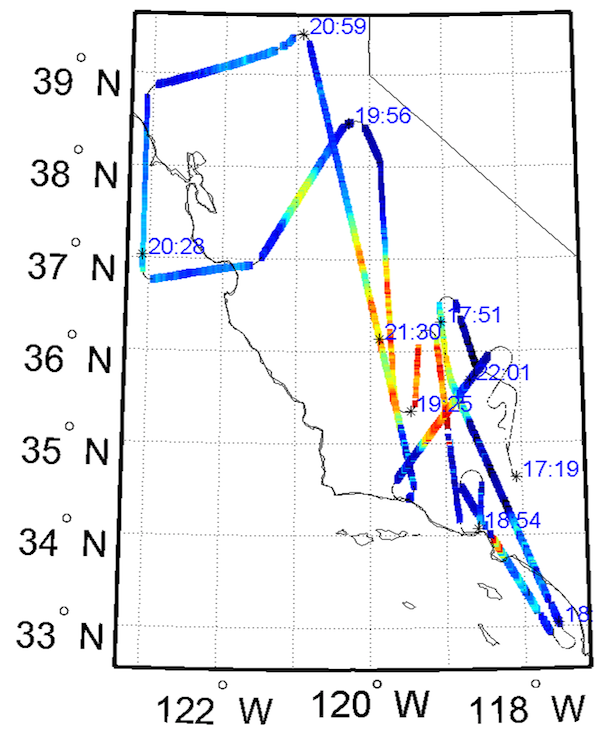 ER-2 flight track color coded by aerosol amount for flight on November 7 for the ACEPOL campaign. Color coding indicates the amount of aerosol in the atmosphere, with orange and red colors indicating more aerosol, according to HSRL-2 preliminary data. Aerosol can include smoke, pollution, dust and sea salt.
Credits: NASA / Sharon Burton

The team completed nine flights that wrapped up mid-November, observing targets like California’s Central Valley and the Pacific Ocean, and as far east as Arizona, where the team observed smoke from controlled forest fires near Flagstaff.

The  ER-2’s payload included four airborne polarimeters (AirHARP, AirMSPI, AirSPEX and RSP) and two lidar instruments (CPL and HSRL-2). Each of the polarimeters used different techniques and angles to measure and record data. The instruments also differed from one another in size and power. From an engineering perspective, the ultimate goal of the ACEPOL mission was to better understand how those overall differences translate into data collection.

The combination of the polarimeter and lidar instruments, along with ground based data from stationary air quality measurement stations provide scientists with a more complete picture of the three-dimensional distribution of aerosols in the Earth’s atmosphere. Utilizing a variety of different approaches for collecting data also enables scientists to differentiate various types of aerosols (e.g., smoke, dust, pollution) and clouds (cirrus, stratus, etc.).

The ACEPOL mission involved partnership between multiple NASA centers, including Langley Research Center, Goddard Space Flight Center, the Goddard Institute for Space Studies, and the Jet Propulsion Laboratory. The mission also included international partnership with the Netherlands Institute for Space Research, which flew the AirSPEX instrument on board the ER-2 for the second time. The instrument made its maiden flight on the ER-2 in January 2016.

During February 2015, the Spectral Polarimeter for Planetary Explorations (SPEX) instrument made its first flight aboard NASA’s ER-2 high-altitude aircraft. The instrument, developed by the Netherlands Institute for Space Research, is designed to measure aerosols within the atmosphere and will later be developed into a space-borne sensor. The aircraft completed a series of three flights to ensure that the instrument will function properly during flight and to prove its viability for future missions.
Credits: NASA Armstrong Video
Quelle: NASA
Raumfahrt - Prototype Space Sensors Take Test Ride on NASA ER-2
« Zum vorherigen Eintrag Zum nächsten Eintrag »
1544 Views
Created with page4