NASA’s Juno spacecraft peeked under the clouds of the most iconic weather feature in the solar system, Jupiter’s Great Red Spot, revealing a complex structure deep below the surface.

NASA’s Juno spacecraft has been orbiting Jupiter for roughly a year and a half and has already provided us with many stunning views of the giant planet. But now NASA has revealed an unprecedented view of what’s below the clouds of one of its most distinctive features: the Great Red Spot.

In June 2017 Juno took the best pictures of the swirling storm to date from a distance of just 9,000 kilometers (5,600 miles). During that pass, Juno’s microwave radiometer (MWR) recorded temperature changes deep below the surface of Jupiter’s long-lasting storm. Juno co-investigator Andy Ingersoll (Caltech) displayed the results at the meeting of the American Geophysical Union in New Orleans.

The microwave data show the temperature structure below the Great Red Spot, revealing that the base is warmer than the top. The warm base probably helps drive the storm’s furious winds. “These winds are three times faster than the jet stream on Earth,” Ingersoll says. “That’s three times hurricane force.” 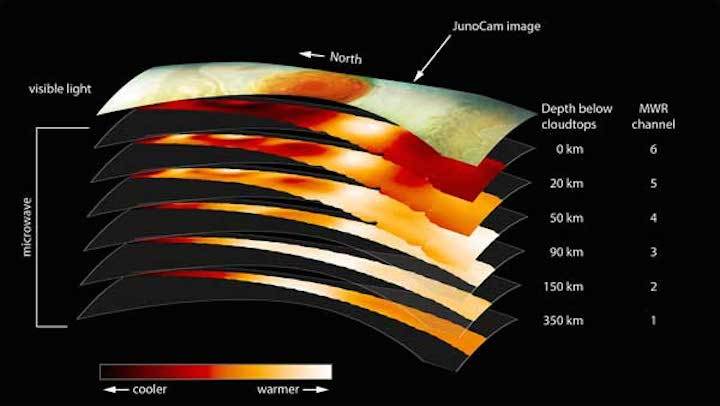 Although this is the deepest any instrument has ever probed, the Red Spot’s roots are still buried beyond the 200-mile detection range of Juno’s microwave radiometer.

Juno has made some other surprising discoveries during its eight Jupiter flybys (the next one will occur on December 16th).

During its sixth science orbit, Juno passed only 2,200 miles from the equatorial zone’s upper atmosphere, There, the Jupiter Energetic Particle Detector Instrument (JEDI) detected hydrogen, oxygen, and sulfur ions moving at almost the speed of light — markers of a new radiation zone surrounding the planet.

Researchers think this radiation originates in gas around the moons Io and Europa. Energetic neutral atoms from this gas hit Jupiter’s upper atmosphere, which strips away electrons and turns the particles into high-energy ions. 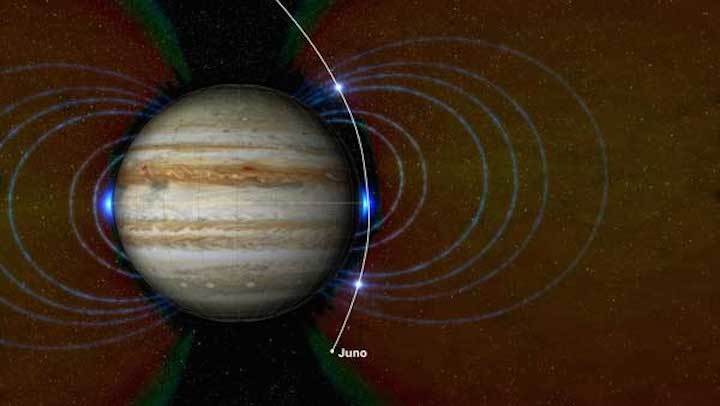 At higher latitudes, Juno’s Stellar Reference Unit (SRU-1) found a different population of heavy ions within Jupiter’s already-known radiation belts. The belts contain mostly electrons streaming around the planet at close to the speed of light. Yet somehow heavy, high-energy ions are finding their way into the belts too.

“We knew we'd see lots of relativistic electrons in the high latitudes but the high energy ions were a surprise," says Heidi Becker (NASA/JPL), who leads Juno’s radiation monitoring investigation.

The find itself is mysterious, as the SRU-1 is a navigation system that’s heavily shielded against radiation. Yet these particles manage to reach the detector inside the unit, where they appear as bright white spots in the detector's output.

Juno has just completed the first quarter of its science mission, which calls for 32 orbits around Jupiter. Juno's principal investigator, Scott Bolton (Southwest Research Institute), says the spacecraft systems appear to be in good shape, but he warns that the second half of the mission will be more technically demanding for the spacecraft.

“The way [the mission] is designed, at the end of the mission it's getting more and more radiation and so the last few orbits are the very worst,” Bolton said. “My guess is that if we're able to do an extended mission, it won't be something that goes for three more years.” 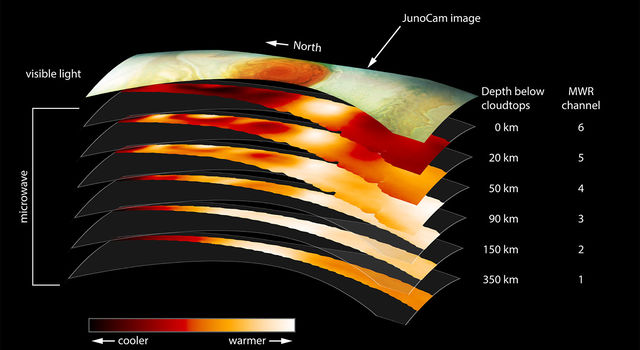 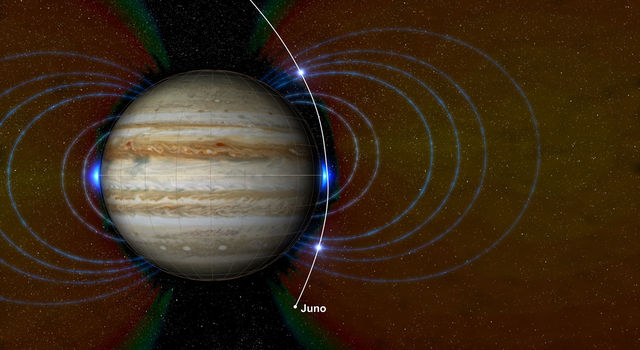 This animation simulates the motion of clouds in Jupiter's Great Red Spot. The animation was made by applying a wind movement model to a mosaic of JunoCam images. Image credit: NASA/JPL-Caltech/SwRI/MSSS/Gerald Eichstadt/Justin Cowart
› Full image and caption

Data collected by NASA's Juno spacecraft during its first pass over Jupiter's Great Red Spot in July 2017 indicate that this iconic feature penetrates well below the clouds. Other revelations from the mission include that Jupiter has two previously uncharted radiation zones. The findings were announced Monday at the annual American Geophysical Union meeting in New Orleans.

"One of the most basic questions about Jupiter's Great Red Spot is: how deep are the roots?" said Scott Bolton, Juno's principal investigator from the Southwest Research Institute in San Antonio. "Juno data indicate that the solar system's most famous storm is almost one-and-a-half Earths wide, and has roots that penetrate about 200 miles (300 kilometers) into the planet's atmosphere."

This animation takes the viewer on a simulated flight into, and then out of, Jupiter's upper atmosphere at the location of the Great Red Spot. It was created by combining an image from the JunoCam imager on NASA's Juno spacecraft with a computer-generated animation.

The science instrument responsible for this in-depth revelation was Juno's Microwave Radiometer (MWR). "Juno's Microwave Radiometer has the unique capability to peer deep below Jupiter's clouds," said Michael Janssen, Juno co-investigator from NASA's Jet Propulsion Laboratory in Pasadena, California. "It is proving to be an excellent instrument to help us get to the bottom of what makes the Great Red Spot so great."

Jupiter's Great Red Spot is a giant oval of crimson-colored clouds in Jupiter's southern hemisphere that race counterclockwise around the oval's perimeter with wind speeds greater than any storm on Earth. Measuring 10,000 miles (16,000 kilometers) in width as of April 3, 2017, the Great Red Spot is 1.3 times as wide as Earth.

"Juno found that the Great Red Spot's roots go 50 to 100 times deeper than Earth's oceans and are warmer at the base than they are at the top," said Andy Ingersoll, professor of planetary science at Caltech and a Juno co-investigator. "Winds are associated with differences in temperature, and the warmth of the spot's base explains the ferocious winds we see at the top of the atmosphere."

"The closer you get to Jupiter, the weirder it gets," said Heidi Becker, Juno's radiation monitoring investigation lead at JPL. "We knew the radiation would probably surprise us, but we didn't think we'd find a new radiation zone that close to the planet. We only found it because Juno's unique orbit around Jupiter allows it to get really close to the cloud tops during science collection flybys, and we literally flew through it."

The new zone was identified by the Jupiter Energetic Particle Detector Instrument (JEDI) investigation. The particles are believed to be derived from energetic neutral atoms (fast-moving ions with no electric charge) created in the gas around the Jupiter moons Io and Europa. The neutral atoms then become ions as their electrons are stripped away by interaction with the upper atmosphere of Jupiter.

Juno also found signatures of a high-energy heavy ion population within the inner edges of Jupiter's relativistic electron radiation belt -- a region dominated by electrons moving close to the speed of light. The signatures are observed during Juno's high-latitude encounters with the electron belt, in regions never explored by prior spacecraft. The origin and exact species of these particles is not yet understood. Juno's Stellar Reference Unit (SRU-1) star camera detects the signatures of this population as extremely high noise signatures in images collected by the mission's radiation monitoring investigation.

To date, Juno has completed eight science passes over Jupiter. Juno's ninth science pass will be on Dec. 16.

Juno launched on Aug. 5, 2011, from Cape Canaveral, Florida, and arrived in orbit around Jupiter on July 4, 2016. During its mission of exploration, Juno soars low over the planet's cloud tops -- as close as about 2,100 miles (3,400 kilometers). During these flybys, Juno is probing beneath the obscuring cloud cover of Jupiter and studying its auroras to learn more about the planet's origins, structure, atmosphere and magnetosphere.

JPL manages the Juno mission for the principal investigator, Scott Bolton, of Southwest Research Institute in San Antonio. The Juno mission is part of the New Frontiers Program managed by NASA's Marshall Space Flight Center in Huntsville, Alabama, for the Science Mission Directorate. Lockheed Martin Space Systems, Denver, built the spacecraft. JPL is a division of Caltech in Pasadena, California.