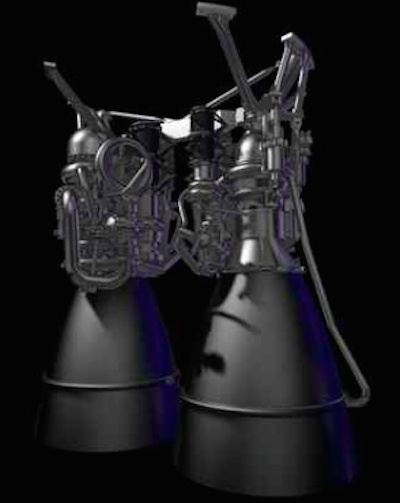 Aerojet Rocketdyne's AR1 rocket engine, which recently completed a successful preburner test. This is being designed to replace the Russian-made engine the U.S. has relied on for decades. (Courtesy photo)

Preparing for a 2019 liftoff, Aerojet Rocketdyne has fired up the workhorse rocket engine preburner of its new AR1 — a machine it hopes will replace the Russian thruster that now ferries astronauts into orbit.

The liquid-engine maker, based in El Segundo and Sacramento, is building much of the massive 500,000-pound thrust motor in Canoga Park.

The AR1, conceived in 2014, is designed to replace the Russian RD-180 that the U.S. relies on for most national-security space missions. The successful hot-fire of the preburner last week in Mississippi means the company is still on track to deliver the equipment by the congressional deadline to develop an American-made Atlas V rocket-booster engine in two years.

The AR1 uses modern technology to provide a lower-cost alternative to prior U.S.-made rocket engines, as government and commercial spaceflight contractors rush to match the much-lower launch costs achieved by Hawthorne-based SpaceX.

“From a U.S. perspective, this is going to be a very affordable engine,” said Tom Martin, Aerojet Rocketdyne’s senior manager for strategy and business development. “Russian labor costs are significantly lower. Our intent is to make sure the ULA (Atlas V) rockets are affordable.

“This would be the first time the U.S. has ever done a full-scale engine using a staged-combustion cycle (propelled by) liquid oxygen and kerosene.”

Aerojet Rocketdyne officials said they have been able to cut costs significantly with the AR1 because of the company’s patented nickel-based metal alloy, and 3D printing technology.

“(The AR1 is) more efficient, and it can be smaller, but delivers the same thrust,” Martin said. “We’ve been working on 3D printing for over a decade.”

Boeing has undergone a series of layoffs since 2016. ULA announced at least 71 layoffs since March from its Vandenberg Air Force Base location on the Central Coast, among hundreds of other layoffs expected this year.

But the AR1 isn’t the only American-made game in town. Commercial rocket-maker Blue Origin is also promoting its competing BE-4 engines for the Atlas V.

When the time comes, Congress will have to choose between the two.

Blue Origin, run by billionaire Amazon.com founder Jeff Bezos, got financial support from ULA to develop the BE-4.

While BE-4 is set to release this year, AR1 won’t finish all flight-ready testing until 2019.

“BE-4 is the only engine that can fly by 2019, meeting the congressionally mandated deadline to eliminate dependance on Russian-built engines,” according to Blue Origin’s website. “The alternative engine (AR1) option is multiple years behind and could not be integrated into a launch vehicle until at least 2021.”

But Aerojet Rocketdyne officials say they will be ready by 2019. The company touts its demonstrated history of powering U.S. government space missions over the newer commercial rocket maker. Its RS-68A engine lifts ULA’s Delta IV booster off the ground with 702,000 pounds of thrust.

Also, Aerojet Rocketdyne’s RL10 engine is used in both the Delta IV and Atlas V second-stage rockets that deliver astronauts and payloads to specific orbital addresses.

Aerojet Rocketdyne is promoting its stellar launch success record in hopes of wooing Congress away from the BE-4.

“Our proven design process and demonstrated manufacturing approaches are key contributors to (the company’s) unmatched record of mission success,” said Aerojet Rocketdyne CEO Eileen Drake. “When replacing the Russian-made engines on current launch vehicles, mission success has to be the country’s number-one priority.”