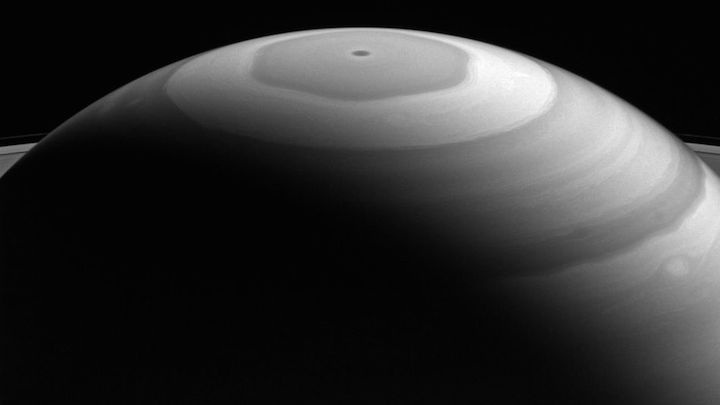 Saturn is perhaps the most photogenic planet in our solar system, and a new photo taken by the Cassini spacecraft shows the world off in a big way.

Bands of clouds look like they were painted on the planet in the new photo, which shows Saturn's north pole dominated by the planet's hexagonal jet stream surrounding the "hurricane-like storm" at the top of the world, NASA said in a statement.

The photo, taken by Cassini on Sept. 5, shows the planet as it looks from about 890,000 miles aways.

"Each latitudinal band represents air flowing at different speeds, and clouds at different heights, compared to neighboring bands," NASA said in the statement. "Where they meet and flow past each other, the bands' interactions produce many eddies and swirls."

If you were to fly above Saturn and look down on the planet's hexagon with your naked eyes, you would probably see it has a blue and gold tinge, according to NASA.

And it's speedy too. The hexagonal jet stream is flying around the planet's pole at about 220 miles per hour.

Cassini, which has been exploring Saturn and its moons since 2004, is set to make its planned death dive into the clouds of the world in 2017, marking the end of its mission.

Cassini will actually crash into Saturn in order to protect the planet's possibly water-filled moons from any contamination from the spacecraft.

Before its death dive, however, Cassini is going to fly in between Saturn and its inner ring, a first for the spacecraft to gather more data about the planet, its rings and how they interact.